Animals slightly injured; traps have since been removed

Two dogs in the Poorman Creek area were inadvertently caught last week in leg hold traps set for wolves, until the owner of one of the dogs found them and set them free.

The traps were located on U.S. Forest Service land near Second Mile Road at the end of Poorman Creek Road west of Twisp. They were set by Washington Department of Fish and Wildlife (WDFW) officials in an ongoing effort to capture and place radio collars on Lookout Pack wolves, said Scott Becker, WDFW wolf biologist.

Becker said this week the traps have been removed from that area and wildlife officials are “re-evaluating some of the trapping protocols right now. We don’t want another incident like this to happen in the future.”

Wildlife officials have confirmed that at least three pups were born this spring to a pair of wolves that have been monitored for more than a year in the Lookout Pack territory, Becker said. Efforts to collar at least one of the adults will continue, he said.

The incident involving the dogs occurred last Thursday (Aug. 1). Andy Floyd, who lives on Second Mile Road, said his dog and a neighbor’s dog followed his wife on a morning run on nearby Forest Service land, but did not return to the house with her. Concerned, Floyd began looking around the neighborhood for his dog.

Floyd said a neighbor heard a dog “barking and yipping just over his fence on the Forest Service land not 100-300 feet away.” Floyd investigated and found the neighbor’s dog with a front paw caught in a trap by the side of a Forest Service road.

“I tried getting the trap off but could not do it by myself. I ended up getting my neighbor to … use most of our strength to get the trap off,” Floyd said. In the process, Floyd said, the dog nipped his wrist. He returned the dog to its owners, Carolyn and Glenn Schmekel, who took the dog to a veterinarian.

Floyd later found his dog caught in another trap further along the road. He said the dog had been missing for about two hours. With the help of someone camping nearby, he was able to open the trap and release his dog, which bit Floyd’s hand and slightly broke the skin. Floyd said his dog has been limping, but is recovering.

Carolyn Schmekel said she was upset that the traps were placed near the Second Mile homes without notifying area residents, and called Becker last week at WDFW to express her concerns. Fish and Wildlife officials had placed a sign on a tree in the vicinity of the traps warning about bringing dogs in the area, but did not speak to residents bordering the Forest Service land.

“This is an extension of our back yard,” Schmekel said in an interview this week. “If you’re going to have traps this close to people’s homes that have dogs and kids, we need to be informed of it.”

Floyd expressed similar concerns. “The lack of communication really frustrated me. I understand it’s good to tag the wolves because of potential problems … but what really bugged me is the traps were so close to the houses and they didn’t tell us.” He said he did not notice the sign about traps until after the dogs had gotten caught.

Schmekel said her dog was probably trapped for about 30 minutes. It had a bruised front leg but was otherwise unhurt, although the incident resulted in a $66 vet bill. 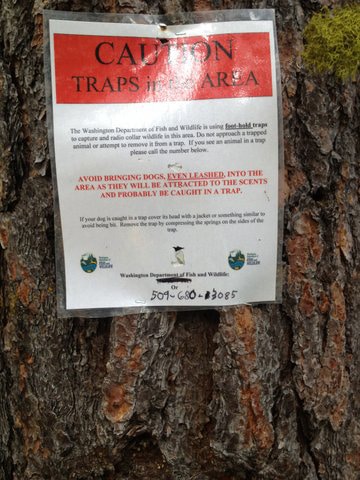 Becker said wildlife officials sometimes talk personally with people living in the vicinity of traps, but didn’t realize that residents in the Second Mile Road area had “free ranging” dogs when they set several traps along the nearby Forest Service road. “We ended up pulling those traps out of there,” he said.

“Most traps are located away from any residences at this point,” Becker said. “No matter where we trap, because we trap on public land, there is potential” for dogs to inadvertently get caught. “Wherever we put traps we put signs at the beginning or end of the road to warn people there are traps for wildlife. We try to do everything we can with signs.”

Traps are often placed along roads on public lands because “wolves are just like people – they use roads and trails to do most of their traveling,” Becker said. Signs placed in the vicinity of traps warn about bringing dogs into the area, describe how to open the trap, and advise covering the dog’s head with a jacket or something similar to avoid being bitten while releasing the animal.

Becker said the leg hold traps are baited with scent to attract wolves, and are outfitted with a transmitter to alert wildlife officials when they are tripped.The traps are located in places that allow the trapped animal to move into the shade, and have offset jaws covered with rubber to minimize injury to the animal.

A WDFW biologist checks the traps every morning, and during the evening as well during warm weather, Becker said. The biologist was making the rounds of a dozen traps in the Lookout pack territory last Thursday morning when the dogs got trapped, and arrived while Floyd was still looking for his dog.

When a wolf is captured, wildlife officials tranquilize it, attach a radio collar and ear tags, and take measurements, Becker said.

Despite ongoing efforts, the Lookout Pack wolves continue to elude capture. “They’ve been trapped a lot and are pretty smart,” Becker said.

Wildlife officials have captured and collared 12 wolves in Washington this year, and now have a total of 16 or 17 collared animals in the state, Becker said. WDFW has confirmed 10 packs of wolves, and Becker said most packs, with the exception of the Lookout Pack, have a collared animal.

“The Lookout Pack has been the hardest pack to catch up with for a number of years,” he said.

Wildlife officials confirmed the existence of the Lookout Pack in 2008, making it the first known gray wolf pack in Washington in more than 70 years. The pack included as many as 10 animals, including adults and pups, in the summer of 2008.

Biologists captured and radio-collared the breeding male and female in July 2008. Genetic analysis of the wolves indicated they were descended from wolves in British Columbia or Alberta, or from reintroduced populations in Idaho and Yellowstone.

Despite protection as an endangered species under state and federal law, poaching reduced the pack from 10 animals to only the breeding pair and one surviving yearling by 2009. The female produced a litter of at least four pups in 2009 and all seven animals survived into the spring of 2010, according to WDFW.

The alpha female disappeared in May 2010, less than three weeks after she was believed to have given birth to a litter. The alpha male was last seen in June 2011. Two Twisp men subsequently pleaded guilty to federal and state wildlife violations in connection with the wolf poaching.