How will it all end? In fire or ice? With a bang or a whimper? For our little world that we live on, the answer is fire, definitely fire. As our sun continues its inevitable progression towards  the red giant phase of a star, it will become hotter. The earth will eventually be charred into […]

On Saturday (Jan. 2), the earth will reach the point on its orbit known as perihelion, our closest approach to the sun. Now wait a minute, you might be thinking. Why is it so cold outside and there is snow on the ground if we are actually closer to the sun? The seasons are caused […]

Just after it gets dark, check out the two planets hanging in the southwest twilight glow. The bright one is Jupiter and its dimmer companion to the left is Saturn. If you look at the night sky a lot like I do, you might notice that over the past few months, they have been getting […]

Welcome to fall and the beautiful crisp clear nights it brings. If you are wondering about that bright red object in the east just after it gets dark, that is Mars. We are extra-close to it now so it appears quite luminous. Over the next month, it will dim as we pull away from the […]

Have you seen that bright red object low in the east just after it gets dark? If not, go outside and check it out. That is Mars! You might think its unusual color is due to the smoke in our skies, but it really is red. Every two years and 50 days we catch up […]

On one of these clear, crisp September evenings, be sure to go out and take a look at the Milky Way stretching across the night sky. It is best to get out of town away from distracting lights on a dark night with no moon. Look for a dimly glowing swath of light extending from […] 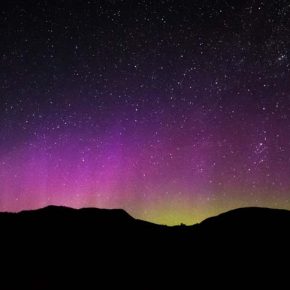 Long ago, a 3-mile-wide chunk of ice and dirt started on a journey from its home in the cold dark outer reaches of the solar system. Now after traveling billions of miles and several thousand years, it has come close enough for us to see it, a spectacular comet in the night sky. Named Neowise […]

Welcome to summer and a beautiful night sky filled with stars, four bright planets, the Milky Way, and even shooting stars. If only we could stay up long enough for it to get dark! Here at the summer solstice, the sun does not set until 9 p.m. and it does not get really dark until […]

Our home in the vast cosmos, the Milky Way galaxy, contains an estimated 300 billion stars. Because of photographs taken by the Hubble orbiting telescope, we now know that there at the least hundreds of billions of other galaxies out there and maybe more, each one of which contains such large numbers of stars. In […]

If you go out and look at the stars every night like I do, you might have noticed something different up there in the sky. The stars slowly scroll across the heavens each night because of the rotation of the earth, and they also move with the changing of the seasons. Rarely does anything happen […]