Food bank in Twisp sees surge in need If there is one thing that keeps Glenn Schmekel up at night during the COVID-19 pandemic, it is the thought of people in the Methow Valley fearing that they will not have enough to eat. Of course, Schmekel is also worried about the virus spreading and infecting […]

Research: thinning, prescribed burning can make a difference It was several years after the Carlton Complex fire before Susan Prichard felt she could begin asking scientific questions about how the fire behaved. “I was honestly so devastated for our community I wouldn’t touch it … and I also honestly didn’t want to be perceived as […]

Bree Dillon describes the experience of opening a yoga studio in Winthrop as riding a rising tide: “We are on the surfboards and someone is pushing us — the set is coming in — and we just happen to be here with the willingness.” Dillon is the owner of Motive Yoga, which currently offers classes at the Mazama Country […]

Burned area susceptible to invasive species The scorched hillside from last summer’s Rendezvous Fire looms above the Rendezvous neighborhood north of Winthrop. About 175 acres of shrub-steppe — a mix of sagebrush, bitterbrush, bunch grass and other native forbes — burned when a fire that started on private property spread into Washington Department of Fish […]

Years of effort behind North Summit facility The Methow Valley Back Country Horsemen (MVBCH) celebrated the grand opening of the North Summit Horse Camp at Loup Loup Pass on Oct. 5. Mary Pat Bauman first had the idea for a horse camp at the Loup when she was a ski patroller for the Loup Loup […]

Dirt bike school for women fills a niche Donni Reddington has been drawn to motorcycles since she was a little girl. Her uncles built a dirt bike track at her grandfather’s place near Tacoma and would ride 1970s Hondas and Yamahas over homemade jumps. Little Donni was too short to ride the bikes so her […] 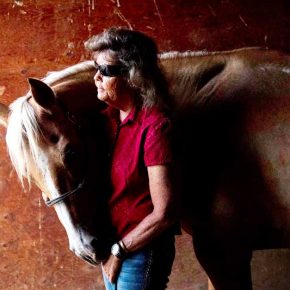 Julie Hensley’s body gently echoes the rolling motion of her horse, Hot Rod, as she lopes in tight circles around her arena. She stops him suddenly and then, as one, horse and rider pivot 180 degrees and take off at a lope in the opposite direction. Ten yards later they do it again. Stop, roll […]

How a miniature horse named Trusty became a beloved therapy animal Trusty may be the smallest horse in the Methow Valley, but he’s also the most well-known. The miniature horse stands right around hip height and weighs in at a whopping 220 pounds. You may have seen him marching in the Fourth of July parade […]

I am pouring myself a drink, now that I am done doing the dishes and looking out my window as the planes and helicopters keep shuttling back and forth from the nearest waterbody, their bellies and buckets full, to the fire that has been burning all afternoon in the sagebrush about one-quarter mile behind my […]