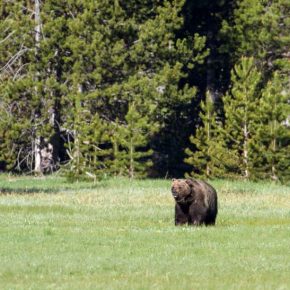 Critics fault process, transparency of action A six-year environmental study on restoring grizzly bears to the North Cascades came to an abrupt end on Tuesday (July 7) with an announcement by the U.S. Secretary of the Interior at a meeting in Omak. Secretary David Bernhardt said further action on grizzly restoration was halted. He made […]

By Jasmine Minbashian Living in the Methow is not for the faint of heart. This is rugged, mountainous country, with the elements constantly reminding us of the power of the natural world. Our backyard — the North Cascades — is one of the most remote and largest intact wild places left in the lower 48. Consisting of […]

The National Park Service (NPS) and the U.S. Fish and Wildlife Service (USFWS) will host a public meeting on the Draft North Cascades Ecosystem Grizzly Bear Restoration Plan/Environmental Impact Statement (EIS) on Oct. 7 at the Okanogan County Fairgrounds Agriplex. Doors open at 5 p.m., and the comment period will be from 5:30-8:30 p.m. Meeting participants […]

Conservation Northwest said in a press release that it welcomes a reopened comment period on the environmental impact statement (EIS) for a proposal to restore grizzly bears to the North Cascades – “if it leads to the completion of the EIS and concrete actions to recover the iconic grizzly bear.” The U.S. Fish & Wildlife […]

Draft plan for N. Cascades still under review If you’ve never commented about the possibility of reintroducing grizzly bears into the North Cascades, or have already commented but have something more to say, now’s the time. The National Park Service (NPS) and the U.S. Fish and Wildlife Service (USFWS) said last week that they are […]

A wide range of evidence shows that grizzly bears roamed the North Cascades for thousands of years, but it may never be clear how numerous they once were, according to a recently released study by the National Park Service.

By Ann McCreary Federal agencies will take additional time to consider input about plans to restore grizzly bears to the North Cascades. The Department of the Interior, the National Park Service (NPS) and the U.S. Fish and Wildlife (FWS) Service recently announced their intention to further evaluate input about a proposal to transplant grizzly bears […]

Transplanting grizzly bears into the North Cascades would threaten the “local economy, customs and culture” of Okanogan County, county commissioners said in a letter to federal officials who are preparing an Environmental Impact Statement (EIS) on a grizzly bear restoration plan.

The letter was written in …

By Ashley Ahearn In a surprising change of course, the U.S. Department of the Interior has announced plans to proceed with grizzly bear reintroduction in the North Cascades. The environmental review of the reintroduction plan was halted abruptly in December, with no clear explanation given as to why. But last Friday (March 23), Interior Secretary […]