Challenging District 2 incumbent Andy Hover Katie Haven, a lower Methow Valley sheep rancher who previously spent more than 20 years as a Merchant Marine engineer, announced this week that she will challenge Okanogan County Commissioner Andy Hover for the District 2 seat on the county commission. Haven, running as a Democrat, said she will […]

Moore for the 12th Dear Editor: This pandemic-caused recession has hit our state hard, and it looks like we will have a $9 billion hole to fill in the coming years. It’s critical to choose a representative with a seat at the table in Olympia when our fiscal options are considered. Our district deserves at […] 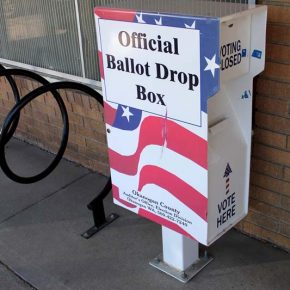 Mail-ins, drop-offs due by Aug. 4 Ballots for the Aug. 4 primary election are being mailed to county voters this week. If you have not received a ballot by July 24, contact the Okanogan County Auditor’s Office at (509) 422-7240. Voters are encouraged to mail in their ballots prior to July 31 to ensure the […]

The Twisp Valley Grange is hosting an online forum featuring four local candidates on Wednesday (July 8) evening. The virtual event will be from 6:30-8 p.m., and questions for the candidates can be sent in ahead of time or during the forum to wendellabj@hotmail.com. Otherwise, there will be no in-person audience participation. Connect to the […]

No mistake Dear Editor: Commissioner Hover has forgotten that he was voted into office — he did not “sign up,” as he stated in last week’s article, “Outrage over DeTro’s Facebook post sparks recall movement.” As commissioners, they have to be careful; “we signed up for this job — nobody put us here,” he said. I imagine that the […]

Lifesavers Dear Editor: Misuk and I deeply appreciate the quick and effective mobilization of firefighting units in tamping down an out-of-control burn pile on an adjoining parcel at Twin Lakes on Saturday (May 30). Another neighbor and a close-by responding volunteer used the tools at hand to beat back the blaze until Fire District 6 […]

In the past few weeks, three Methow Valley women have announced their candidacies for relatively high-profile elective offices — one returning for another campaign, two new to the fray. Ann Diamond, who gained impressive recognition as an Independent candidate for House of Representatives Position 1 in the far-flung 12th legislative district two years ago, could be considered […]

Don’t expect much overt campaigning – especially the door-knocking variety – by candidates for local elective offices as long as coronavirus restrictions remain in place. Several candidates have announced that their campaigns will stay active, but in a relatively low-key way, ahead of the August primary elections. Adrianne Moore, a Winthrop resident and nonprofits manager, […]