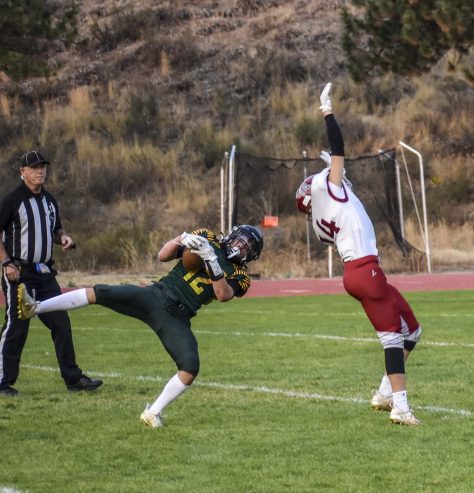 Photo by Rick Lewis Remy Paz intercepted an Okanogan pass in the first quarter of the Mountain Lions’ 70-14 romp over the Bulldogs’ JV squad. 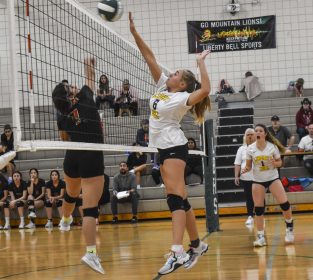 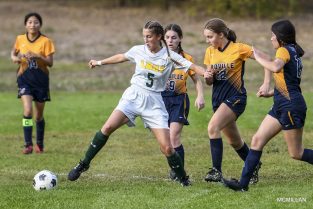 Photo courtesy of Alisha McMillan Kara McMillan aggressively pursued the ball against Oroville. She scored two goals in the match. 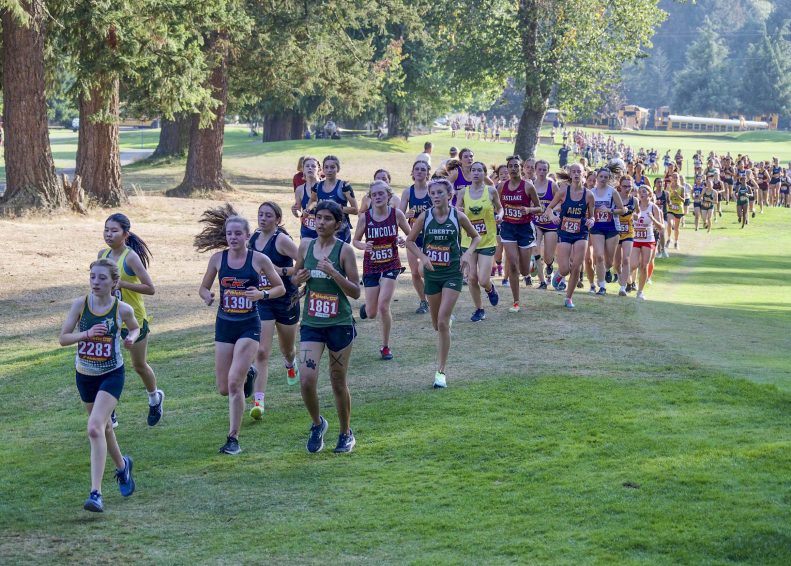 Photo by Erik Brooks Liberty Bell’s Ingrid Venable, No. 2610, kept pace with the pack at the Nike Twilight Meet.

Liberty Bell High School volleyball traveled to Tonasket for an unusual match with the Tigers on Sept. 28. Once again, the Mountain Lions were competitive and pushed the Tigers, forcing an extended first set before losing 25-27, and taking the third set, 25-14. But the Tigers prevailed, 3-1, in the match.

The Bridgeport Fillies stepped onto the floor in the Lions’ Den on Saturday (Oct. 1) and ran into a team ready to break through with their second league win. The home team made short work of the Fillies, taking the match in straight sets, 25-17, 25-11 and 25-17.

Riding the strong serving and defensive play of junior libero Pearl McArthur, freshman Helaina Remsburg’s setting and the emergence of freshman Layla Mortland as a frontline defensive force, the Mountain Lions had very few anxious moments as they cruised to the victory, taking just under an hour for the match.

Mortland, who started the season practicing mostly with the JV squad, stepped up ably in the absence of senior hitter Ellie Blank who was out of the area attending a family function.

“She was amazing today,” said Assistant Coach Stephanie Mitchell, filling in for Head Coach Beth Blank. “She’s worked so hard this year and today she was great.”

Volunteer assistants Maggie Wicken and Greg Knott were also beaming. “She’s come a long way in a short time,” said Knott. “A couple of years ago, when she first got started, I wasn’t sure if she was going to hang with it. She is really working hard, getting better and showed that today.”

Liberty Bell took to the road to Lake Roosevelt on Tuesday (Oct. 4) this week, then faces Brewster on Thursday (Oct. 6), looking to avenge an earlier loss. Two matches during Homecoming Week take them to Oroville on Tuesday (Oct. 11), then a home match on Oct. 13 against the highly ranked Manson Trojans in the Den. JV matches begin at 5 p.m., varsity matches are set for 6:30 p.m. each day.

The Mountain Lions exploded last Thursday in a goal-scoring frenzy in an 11-2 rout of the Hornets in Oroville. It was the first win of the 2022 season for the young Liberty Bell girls after a tough slate of early matches.

Coach Katie Overbeck was understandably excited about the breakthrough win.  “We have an amazing team with tremendous potential,” she said. “There are several freshmen, which is delightful for our future. Already, our new teammates have made huge strides in their improvement of the game.”

“We had many first varsity goals, which is exciting,” Overbeck said of the onslaught. Olive Frady and Alea Colin scored their first career goals. Freshman Kara McMillan joined a group of veterans in Lilian Overbeck and Adee Smith scoring two goals apiece, and Marit Nelson hit for the “hat trick,” penetrating the Oroville net three times.

The defense held the Hornets to two goals in what was probably, their best game of the season. “The defense played really well,” said senior goalkeeper Ruby McCarthy. “I think this win will have a positive effect on the rest of the season.  We proved to ourselves that we can play well and win, and hopefully it will serve as motivation to keep practicing hard and improve even more.”

The Mountain Lions are on the road this Thursday to Bridgeport for a 4:30 p.m. kickoff as they square off against the Fillies. They return home for two Homecoming Week matches on Tuesday at 4:30 p.m. (Okanogan), and Thursday (Lake Roosevelt) with a special 5:30 p.m. match time.

The Liberty Bell Cross Country team headed over the North Cascades Saturday to participate in the Nike Twilight, the largest meet of the year for sheer numbers of runners participating. The Mountain Lion boys varsity fielded a full scoring team for the first time in several weeks, placing 15th of the 35 teams in the small school division, which included schools that fall into the B, 1A and 2A classes in Washington.

The girls split the squad with four runners in the varsity girls’ small school division, and three eighth-graders opting for the junior varsity race. As a result, the girls varsity did not field the requisite five runners to score in the team points battle.

Junior Leki Albright led the way for Liberty Bell, touring the 5-kilometer course in 20:17, placing in the top 20 individually, while sophomore Dexter Delaney was the 15th-place finisher in the boys’ race in 16:29.

Junior Will Halpin, rejoining the team after a couple of weeks resting a sore leg, ran a “solid race,” according to Head Coach Erik Brooks. “For his first race back, he ran pretty well.”

“It was the first time we had enough runners to complete teams on both the girls and boys sides,” said Brooks. “We gave the younger girls a choice, and it was good they opted for the JV race. They were more in a field they could compete in and run with a number of girls.”

The Liberty Bell Invitational Meet happens this Saturday at the Methow Valley campus. Currently 10 schools are registered for the meet, including Kettle Falls and Forks.

First middle school races get underway at 11:30 a.m. at Mountain Lion Field. Varsity action will follow, with awards ceremonies at about 1:30 p.m. This is the first of two meets at Liberty Bell. The second, on Saturday, Oct. 29, is the regional state qualifier meet.

A week and a half ago, the Mountain Lions had a schedule that provided them, essentially, a two-week break from action for lack of schools available to fill the holes in the schedule.

Almost overnight late last week, Activities Director Michael Wilbur and Head Coach Jeff Lidey hastily put together a pair of games that suddenly had the local boys playing on (Saturday, Oct.1), then on Monday in a non-counting tilt with Okanogan’s JV squad, and next on Friday (Oct. 7).

That grueling seven-day run began with a trip over the North Cascades to the Skagit River delta town of La Conner, where the Mountain Lions played a quickly arranged Saturday afternoon game against the Braves. La Conner is trying to rebuild a program that had been shut down for lack of numbers, starting up again at the 1B 8-man level.

It was another 50-plus point day for No. 2 ranked Liberty Bell, which took only 14 of the two dozen roster players on the trip, shutting out the Braves 54-0. Riley Lidey had a perfect day, 9 completions on 9 attempts passing, for 134 yards and 2 touchdowns to freshman Remy Paz. Paz also had a touchdown from the quarterback position, with Sawyer Crandall on the receiving end of that pass.

The younger Paz also led the rushing attack with 86 yards and a touchdown. Older brother Lucien scored once on the ground, as did Merek Johnson. Defensively, it was a total team effort, Lucien Paz leading the team in tackles with 6, 3 assists and a forced fumble.

On Monday, the Mountain Lions routed the Okanogan JV 70-14 in a hybrid combination of 8-man and 11-man football, depending on which team had the football. When Liberty bell was on offense, it was the 8-man game, switching to the 11-man game when Okanogan had possession. The Mountain Lions were in control from the start of the contest, which does not count on their season varsity record.

This Friday, Liberty Bell makes the long trip to Kendrick, Idaho, a little berg of 400 population about 35 miles east of Pullman. The Tigers have a powerful 8-man team, ranked 10th nationally according to MaxPreps.com, an online publication that specializes in high school sports coverage throughout the U.S.

Because of the Mountain Lions’ independent status in 8-man football this year, finding opponents has been a challenge, according to Wilbur.

“Basically, I’ve been connecting with other ADs in Washington who are looking for games and trying to find ones that work,” Wilbur said. “We were able to add the La Conner game and then I was contacted by Kendrick.”

“With the way that our guys have been playing, it makes sense to find a way to challenge them,” he continued. “Playing a game against the Idaho state champ is a big deal, but our guys have earned the right to be in the conversation about the best 8-man teams in the northwest. It should be a great challenge for a very good team.”

Kickoff is set for 7 p.m. Details on possible livestreaming of the game are yet to be announced by the schools. Check the Methow Valley School District’s website at methow.org, the Liberty Bell Booster Club Facebook page, or call the school at (509) 996-2215 for updates.

Homecoming Week hits campus next week with activities and events scheduled all week. Cross country, volleyball and soccer all have home events beginning with the Liberty Bell Invite on Saturday.

Homecoming Activities night, including class competitions in tug-of-war, ultimate Frisbee and powder puff football, happen Wednesday night (Oct. 12). The Homecoming football game with Bridgeport and the halftime royalty coronation are on Friday, and the annual Homecoming dance on Saturday.