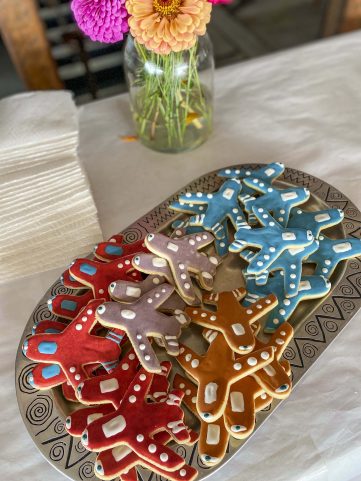 Photos by Ashley Lodato Leki Lodato Albright made airplane cookies for the Master Pilot award celebration for her grandfather at Pangborn airport in East Wenatchee. 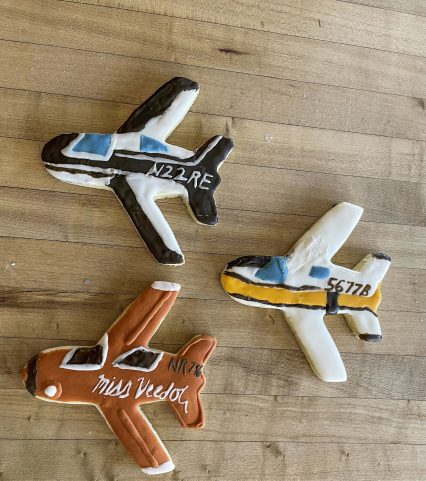 Most people who wrote me wanted to know if my dad was surprised by the award. He was indeed. In blatant defiance of the entire concept of “surprise,” he also asked if he should expect any more surprises in the coming year. He should not. The guy is 80, after all.

I heard from Linda Hughes, whose pilot father, Bob, was born in Wenatchee in 1927, days before Lindbergh’s famous flight and just a few years before Clyde Pangborn and Hugh Herndon Jr’s historic trans-Pacific flight that crash-landed in hills of East Wenatchee, the landing gear having been jettisoned upon takeoff to save weight. Inspired by Lindbergh, Pangborn, and an acquaintance up Benson Creek who had an airplane, Bob became passionate about aviation and became a pilot in early 1947, flying to visit the Methow Valley and other places. His first plane had cloth wings but he eventually ended up in a Cessna 180, “his pride and joy,” Linda called it.

Eventually Bob settled in Thurston County, creating a landing strip and an airport community of pilots living alongside it. “That way Dad was able to live on the airstrip and watch planes for the rest of his 90-year life,” Linda says.

I also learned about cool things other people’s fathers have done. Like did you know that Carolyn Sullivan’s father was the world dominoes champion back in the day? You do now.

Rhonda Jacobus’s dad was a private pilot in Twisp and Winthrop in the 1960s. Coincidentally, he was also a dentist, just like my dentist, Dr. John O’Keefe, who initiated this whole pilot award shindig by telling me about the Master Pilot award in the first place. Dr. O’Keefe, along with a crew of other Methow Valley pilots, buzzed in for the award celebration at Pangborn airport a couple of weeks ago.

At the celebration there were a couple of other Master Pilots in attendance, both of them wearing the Master Pilot pin, which, said the FAA person delivering the award and pin to my dad, “Will get you nothing special and in to nowhere.”

But as I know from talking to my dad and other pilots, that’s not the point; the time in the air is all the reward they’ve ever wanted.