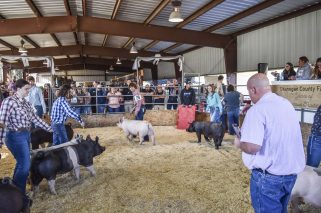 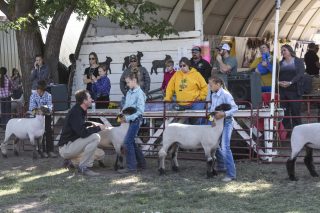 Valley entrants Summer Sather and Melissa Holt presented their sheep for judging at the fair. 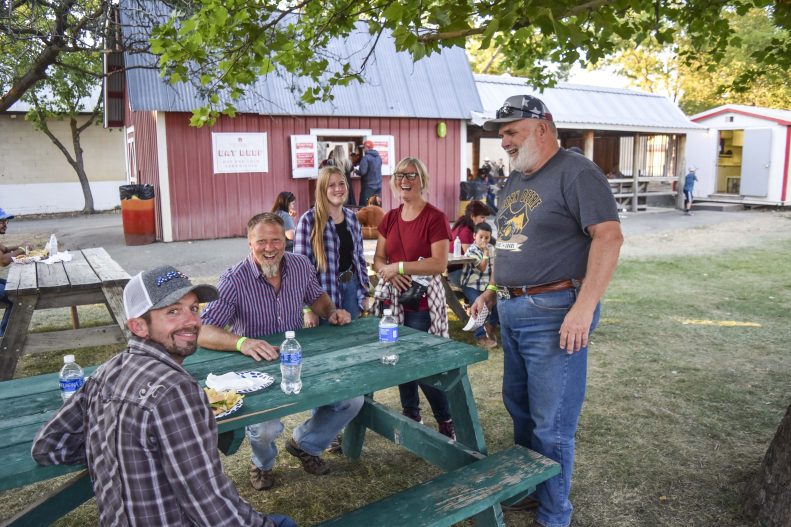 Valley resident Jim McMillan, right, shared a lunch laugh with the Wengerd family at the fair.

Grew up competing in different arenas

With a combined quarter-century at the Okanogan County Fair, Liberty Bell High School seniors Mackenzie Scott and Nicholas White bid farewell to the annual September ritual this year, both in grand champion fashion.

Demonstrating their skills in competitions at opposite ends of the fairgrounds, Scott specialized in equestrian showing in the north arena while White followed a long family tradition of showing and selling hogs in the south pavilion.

Scott, who has been riding horses at the fair since she was 3 years old, took home the grand champion ribbon in senior stock seat equitation, an event that demonstrates a number of different handling and riding skills exhibiting how well the rider and the horse get along as a team.

While White has been active in the Methow Valley Cascaders 4H Club since his earliest days, fitting and showing rabbits and pigs at the fair, Scott’s road has been of a more independent nature. There has not been a consistent equestrian group in the local 4H organization, so horse entries have been largely in the junior open category. Still,Scott has had a small, non-affiliated group with which to work that includes two other Liberty Bell students in junior Kyler Mitchell and sophomore Zoe Kaltenbach.

White was active in the rabbit project group when he was in first and second grades, learning how to show smaller animals before jumping into the hog pen at the age of 8. This was his tenth year showing a pig at the fair through 4H, both for market value and demonstrating his skill as a handler of the animal. He also managed to earn the top mark in the senior 4H public presentation competition, held prior to fair.

“I would totally recommend it,” he said of his 4H and fair experience. “It’s super fun going to fair and showing animals. I have learned a lot.”

He also spoke, reflectively, of the community support for the fair youth experience in the Methow Valley and beyond. “It was amazing to see how the communities support the kids and the auctions here,” he said.

Scott’s journey has been different, being an independent junior open entrant in the fair, and not part of a larger organization like 4H or the Future Farmers of America (FFA). There was a 4H project group for a couple of years in her early days, but the numbers were limited, and eventually having a project group was not feasible for lack of numbers.

Her final few years of competition have been highlighted by a number of grand champion ribbons, as well as a small group of friends with which to work.

Mitchell is an experienced rider, growing up around horses and trail riding, and was solid support as a peer for Scott. Kaltenbach, a first-year rider at fair, has given Scott the chance to work with her on developing riding and showing skills, coaching and learning at the same time.

Even without the 4H experience, Scott was very enthusiastic about riding and showing at the fair all of these years. “It’s been great,” she said. “I’ve learned so much, and made many friends through my riding. Yeah, I would definitely recommend more kids try this.”

Scott also participates in the Washington State High School Rodeo Association’s slate of springtime events, where she does barrel and pole events which test her ability to handle a horse in full gallop as well as meticulously stepping over and through what amounts to an obstacle course. She is contemplating next year, with horses and animals seemingly foremost in her mind.

“I’m not really sure, yet. I’m kind of looking at riding on a team in college, but haven’t made that decision yet,” she said.

“The judge said I wasn’t flamboyant enough, so I pulled out this shirt,” he said.

Friday morning’s competitions seemed to be largely about how well the horses had been trained and responded to the preset courses set before them. But Mitchell couldn’t be mistaken from across the grounds, some of that being attributable to his 6-foot, 5-inch frame atop his mount. Most of it, however, was the shirt.