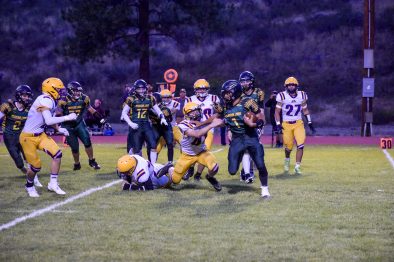 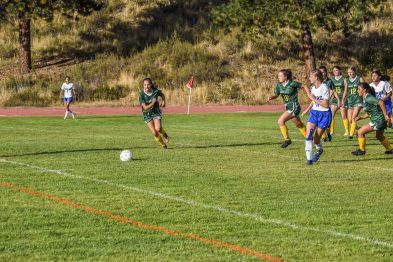 Liberty Bell’s Audrey Roman zeroed in on the ball against Tonasket.

The Liberty Bell High School Mountain Lions cruised to a 54-12 victory over the Concrete Lions last Friday in a game that ended with a halftime concession by the visitors after several injuries reduced their available players to an unsafe level.

Concrete only brought 12 rostered players to the Methow Valley from their Skagit Valley hometown. Their coaching staff requested the forfeit when only 10 players were able to answer the second half start.

Early on, the contest looked to be fairly competitive as Mountain Lion head coach Jeff Lidey rotated a number of players, giving many of his two dozen squad members some varsity experience. The Paz brothers got the home team on the board early when freshman running back Remy Paz broke free for a 24-yard touchdown run, and sophomore Lucien Paz corralled a pass from senior quarterback Riley Lidey for the 2-point conversion and an 8-0 lead.

The visiting Lions struck back almost immediately, putting together a long drive and reaching pay dirt after only a minute and a half off the clock. The two-point conversion failed and halfway through the first quarter the Mountain Lions led the Lions, 8-6. On the ensuing kickoff, Brodie Barnhart snagged an onside kick attempt by Concrete, returning it to the visitors’ 36 yard line, setting the stage for some razzle dazzle.

With the ball on the Concrete 30 yard line, Lidey took the snap and pitched the ball to tailback Lucien Paz, who looked like he was headed to the far sideline when he pulled up and fired a volley downfield, hitting Barnhart in stride behind the defense for six points and a 14-6 lead. Concrete responded with another long drive, crossing the goal line on a 13-yard quarterback keeper by Josiah Rider to pull the Lions to within two points at 14-12.

Another attempted Concrete onside kick went haywire with Liberty Bell recovering on the Concrete 46 yard line. Lidey hit Merek Johnson on a 34-yard strike to the 12 yard line, then back to Barnhart to the 2 yard line. The Mountain Lion signal caller called his own number, dashing the final 2 yards into the end zone to close out the first quarter at 20-12.

In the second quarter, things got serious for the Mountain Lions, as they erupted for 34 points while holding the visitors to a goose egg. Liberty Bell took advantage of a Lucien Paz punt return to the Concrete 7 yard line with a quick score. Remi Paz picked up a rolling Concrete punt at the Lions’ 35 yard line, circled back around to avoid the coverage, then dashed across the field with a convoy of blockers led by Sawyer Crandall into the end zone for a touchdown.  Lidey intercepted a Concrete pass, returning it 40 yards to the 12 yard line, setting up a 2-yard touchdown pass to Lucien Paz to make the score 38-12.

Concrete put together some plays to move the ball downfield, only to fumble the ball away at the Mountain Lion 7 yard line. One play later, Lidey would take a rollout to the left side looking to throw, then pulled the ball down and sprinted 88 yards to run the score out to 46-12. “I was going to pass it,” said Lidey, “but he was covered and it looked open. I’m not used to running that far. I was winded, for sure.”

Remy Paz would close out the scoring, intercepting one last pass and strolling 5 yards into the end zone for the final 54-12 tally.

At halftime the Concrete coaching staff contacted head referee Larry Gilman to inform him of their intent to forfeit the second half. “They had said that if two players were injured and not able to play that they would forfeit,” said Coach Jeff Lidey. The teams shook hands and the game was called.

At press time, the Mountain Lions are not scheduled again until Homecoming on Oct. 14 against the Bridgeport Mustangs. Oct. 7 was to be a matchup with the Pateros Billygoats, but Pateros has canceled its 2022 season, leaving that date also open. Athletic Director Michael Wilbur and Coach Lidey are currently looking to fill one of those dates.

The Mountain Lions took the past week off from competition with only a routine week of practices and a Saturday evening mile time trial on the track at the high school. Coach Erik Brooks called it “a little ‘twilight’ practice for our race Saturday in Marysville.”

The break came as athletes prepare for the annual trek to the Nike Twilight at Cedarcrest Golf Course, a huge meet featuring top schools from all classifications statewide, and some from out of state. This year several top teams from the “small school” classifications will be in attendance, including state rival NW Christian (Lacey) and local 1A schools Cascade and Chelan.

It was also a timely break, allowing for several varsity runners to heal up from nagging soreness, brief illness and a wisdom teeth extraction. Assistant coach Sarah Brooks affirmed that everyone should be ready for this coming weekend.

The Can-Am was the second straight team title for the girls middle school runners. On Tuesday at Okanogan, they swept the three top spots, and had all five scoring runners place in the top 10, scoring a near perfect 19 points to easily outdistance 2nd-place Royal. Posey Hannigan topped the podium with teammates Sammy DeSalvo and Ava Burrington in 2nd and 3rd, respectively, followed by Anja Merkens in 6th place and Maren Sands 7th in the 1.5-mile race. Avery Vracin completed the top 10, and Madison Williams was one place behind in 11th.

The Mountain Lions took a 1-5 record into the annual Quincy Volleyball Tournament this past weekend and found some mid-season success to soothe their early-season woes. After suffering two shutout league losses at perennial powers Manson and Okanogan, the girls opened at Quincy with wins over 2B schools Mabton and Cle Elum before finally dropping a match with 1A Cashmere in the pool play portion of the tourney.

“The girls had a fantastic showing,” said first-year coach Beth Blank. “We started out with a nearly 100% serving percentage. By the end of the day were serving at a 69%. That makes a huge difference in the outcome of a match.”

In a year of rebuilding after key graduations last year, Blank was encouraged with the successes of the one-day tournament at the Columbia Basin school. “We needed these wins under our belt after starting the season falling to the top-ranked teams in the league,” she said. “These wins reminded our girls that they can compete with all of them, they just need to believe they can.”

Blank singled out sophomore Violet Chrastina and senior Ellie Blank for their play at Quincy.  “Violet Chrastina had an impressive serving and passing day while nursing a high ankle sprain.  She is normally a full-rotation player, but with her injury, I have kept her in the back row passing.”

Coming off of her injury year, the younger Blank looked strong. “She was back playing like her pre-injury self with several impressive kills and tough serves, said Coach Blank. “She sees the holes in the other side of the court and puts the ball there effortlessly.”

The girls return to league play on Wednesday (Sept. 28) with a trip to Tonasket. Next home action is Saturday (Oct. 1), when they take on the Bridgeport Fillies. JV plays at 11 a.m.; the varsity match is set for 12:30 p.m.

The Liberty Bell girls’ soccer teams dropped two more contests this past week, losing a road game at Pateros 2-0 on Monday (Sept. 19), then losing at home on Thursday (Sept. 22) to Tonasket, 9-0.

It’s been a tough season so far for the young and mostly inexperienced girls’ soccer program. The Mountain Lions are still searching for their first win, against four losses, in a year when the number of young freshmen and sophomore players significantly outnumber the junior and senior veterans. They have only managed to score one goal through their first five matches, on the road at Cascade last week, in a 7-1 loss.

Still, the girls are undeterred by their early season difficulties. “The season is a rebuilding one for sure,” said coach Katie Overbeck. “(We have) tons of freshman in the team which is exciting for our future.” Nine of the 20 rostered players are freshmen this year. Add the three sophomores and almost 60% of the Mountain Lion soccer program consists of a young underclass.

“The team is coming along,” said the second-year coach. “They get stronger and more confident every day.”

A trip to Oroville is next on the schedule on Thursday (Sept. 29). Next home action is scheduled for Tuesday, Oct. 11, kickoff at 4:30 p.m., versus the Okanogan Bulldogs.