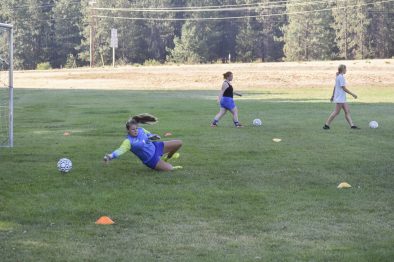 Lilly Belcher extended herself during a goal-tending drill at a girls’ soccer pre-season practice. 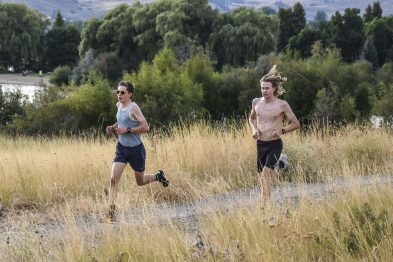 Photos by Rick Lewis Dexter Delaney, left, and Will Halpin hope to lead Liberty Bell to another state title in cross country.

Both programs see their first action this week, cross country on Saturday (Sept. 10) at the season-opening Gear Up Northwest Preview Meet, hosted by Sehome High School in Bellingham. Girls’ soccer opens at home, hosting the Chelan Goats at 4:30 p.m. on Thursday (Sept. 8).

If you are looking for a tradition like no other at Liberty Bell High School, then look no further than the Mountain Lion cross country program. Since the 2015 season the Mountain Lions have occupied the WIAA state meet podium every year in both boys’ and girls’ competition, winning four state championships and the same number of runner-up team trophies over that span. (There was no state championship meet in 2020, the COVID cancelation year.)

In that time span, the girls’ teams were led by the dynamic pair of Novie McCabe and Gretta Scholz, McCabe winning three straight individual titles and Scholz taking second behind her teammate a couple of times, also placing second her senior year of 2019.

The boys took three straight runner-up trophies, the tables being switched in 2021 when the boys routed the field in taking their second state championship. The first came in 1998.

Led by 2021 state runner-up Will Halpin, the boys look strong again this year with fellow junior Aksel Thomson, sophomore Dexter Delaney and a solid senior class with the Schmekel twins, Jackson and Tristan, and Isaiah Stoothoff all returning to the program. Junior Kyler Mitchell brings experience and a trip to state as the first alternate.

Delaney showed great promise as a freshman last year, winning the small school race at Sehome’s season-opening meet. But his season ended early via the injury bug. He got through the winter Nordic season without aggravation, then placed third in both the 1,600-meter and 3,200M runs at the WIAA state track and field championships last spring, setting aside any lingering fears of re-injury and claiming to be “psyched and ready” for the fall XC circuit.

The early word is that several incoming freshman who were thought to offer the Mountain Lions a boost in defense of their 2021 title have opted to forego their freshman year of cross country. Another significant loss for the boys is the absence of seniors Carter and Graham Sheley, both top 20 runners at state in 2021, who have opted out of their senior season.

On the girls’ side, the Mountain Lions will be led again by Leki Albright, a junior this year and defending league and regional champion, as well as state individual runner-up.

The Mountain Lion girls have some shoes to fill, literally, with the graduation of 2021 seniors Ayeanna Ruprecht, Payten Kaufman and perennial Pasco podium placer Jori Grialou. Grialou was in the top 10 individually in each of her three runs at state.

Sophomore Zoe Kaltenbach and junior Sandra Hernandez each bring enthusiasm and toughness that serves them well in the final meters of a race. With an apparent shortage of numbers, look for freshman Josie Bolinger, and eighth-graders Ingrid Venable and Taylor Hover to possibly step up a year early and help restock the shelf.

In the Central Washington B League, Liberty Bell should set the standard for both boys and girls with programs at Brewster, Manson and Okanogan continuing to grow interest and ability in running.

Lake Roosevelt and Oroville have struggled for numbers on both sides recently, scrapping for the minimum five runners to field a scoring team. The Bears fielded six runners last year and return everyone from their 8th-place boys state team.

Halpin and Delaney, as a duo, should place well at state. In 2021, Halpin was a close second to Ilwaco senior Daniel Quintana, and should face some stiff competition from Asher Ingram of NW Christian Lacey, Ciaran St. Hilaire of Tri-Cities Prep, and his own teammate, Delaney, for the top spot.

It should be fun to watch the two top Mountain Lions work in tandem on the course. We’ll get an early preview as Liberty Bell and Tri Cities Prep meet up at the Wenatchee Invite on Sept. 17 at Walla Walla Point Park. The Mountain Lions will see NW Christian at the Nike Twilight on Oct. 1 in another potential state preview.

The Mountain Lions will see NW Christian at the Nike Twilight on Oct. 1 in another potential state preview.

The girls will be the league and regional favorite again, but will need some help from the younger classes to return to the podium at state. Albright, last year’s runner-up, will have some stiff competition at the state level with NW Christian sophomore Madison Ingram and sophomore Josie McLaughlin from St. George’s nipping at her heals in 2021.

The Mountain Lion junior, however, has earned consideration as a favorite to be at the top the podium in Pasco on Nov. 5. As with the boys, Albright will match up against several potential state competitors at the Nike Twilight in the mid-season meet.

Albright and Halpin are both optimistic and excited about the upcoming season, and share the same philosophy:  personal improvement through the season.

“I’m looking to run faster than I did last year,” Halpin said in the early Sunday morning light on the Liberty Bell track last Sunday morning, pretty much echoing Albright’s thoughts from the evening before. Both were at the track, at separate times, providing support for Coach Erik Brooks in his 24-hour fundraising effort.

Best opportunities to see Liberty Bell will be Saturday, Sept. 17, at Walla Walla Point Park in Wenatchee; Tuesday, Sept. 20 at the Okanogan Valley Golf Course; and at the Liberty Bell Invite on Saturday, Oct. 8.

When half of your roster graduates, it’s almost one of nature’s rules that you are going to have a down year.  The Mountain Lion roster of only 14 or 15 players might also be such an indicator.

“We’re a little short in numbers, but we have a core group of some good kids that work hard,” said the third-year coach during early fall practice. Overbeck and assistant coach Annie Saunders will be working and evaluating almost right up until opening game time on the starting alignment.

“We’re just getting to know a few of these girls and not sure how we are going to use them,” said Overbeck.

She also pointed to some key players in key spots that do return this year and should give the Mountain Lions a boost, translating into wins on the field. Senior leadership will come from returning players Adee Smith, Ruby McCarthy and Nina Kominak. Incoming freshman Marit Nelson is a solid athlete and will contribute significantly after spending her eighth-grade fall playing up on the varsity squad with all of those graduating seniors.

Returning are both goalkeepers in senior Ruby McCarthy and sophomore Lillian Belcher. Both are proven and talented. McCarthy was the designated net-minder last year until suffering a late-season concussion that took her out of the last couple of matches and the district tournament.

Belcher, who had gained some valuable experience in her eighth-grade season, filled in quite ably in 2021 for McCarthy, spelling her occasionally, then stepping in full-time after McCarthy’s injury. The two will compete for the No. 1 spot, yet to be determined, and the other will be on the field somewhere, for most of every match.

Junior Lillian Overbeck is speedy and skilled, and will be up front somewhere, capably handling the ball and getting shots on the opponent’s goal. Smith and Overbeck together on the front line have the ability to blow by defenders. The big question is, will the midfield be able to get them the ball to take advantage of their speed?

The NCW2B is a tough league, with Okanogan, Tonasket and Brewster likely to occupy the top three spots. Bridgeport, Lake Roosevelt and Manson will provide interesting match-ups for Liberty Bell. Oroville has had difficulty filling a roster the past few years with numbers comparable to the rest of the league.