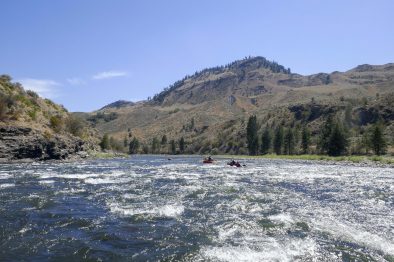 Photos by Marcy Stamper Because of its unique geology, the Similkameen River has stretches of whitewater and deep pools, even in August. 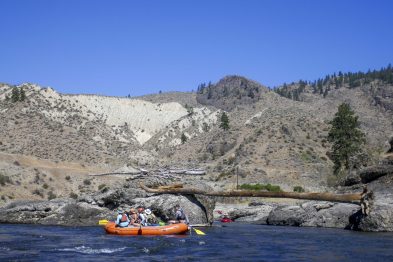 The rafting trip was a chance for people to gain new perspectives on Enloe Dam and the future of salmon in the watershed.

Even when the water in the Similkameen River is so low that large boulders are covered by just a few inches of water, there are stretches of whitewater and spirited rapids as the river winds through dramatic canyons northwest of Oroville.

It’s especially eye-opening to travel the river and see how it changes as you near Enloe Dam, where the river becomes a flat, languid pool. Starting about 1 1/2 miles upstream of the dam, the river is more like a bathtub, barely moving, full of silt and 7 feet deep.

Organized by the Methow Valley Citizens Council (MVCC) and led by Methow Rafting, the trip was a chance for people to gain new perspectives as efforts are underway to study the impacts of Enloe Dam, particularly on salmon — and to look at the feasibility of removing it. Bringing people together on the ground enables them to see the situation for themselves and connect around complex issues in a way that doesn’t happen in meetings, MVCC Program Director Lorah Super said.

The Okanogan County Public Utility District (PUD), which owns the dam, has recently lent its support to a study of the feasibility and ramifications of dam removal (see story on page A3). The PUD was invited to join the raft trip but declined, Super said.

Enloe Dam hasn’t produced hydropower in more than 50 years. The PUD had been pursuing re-energization, but in 2018 the commissioners determined that producing electricity at Enloe wasn’t economically viable. Since then, the PUD has kept up with maintenance and safety inspections at the dam.

Some local residents and conservation groups have been advocating removal of the dam for decades. In recent years, tribes in the United States and Canada officially lent their support to efforts to take out the dam and restore the Similkameen.

Proponents of dam removal point in particular to data from fish biologists about the decline of salmon populations in the Okanogan basin, which is fed primarily by the Similkameen River.

The number of steelhead in the Okanogan Basin has decreased precipitously in recent decades. In 2022, the population reached a historic low, with only 87 natural-origin fish returning to the basin, according to the summary of the proposed feasibility study.

While ocean conditions, fisheries management and habitat loss have all played a role in the demise of the fish, warm stream temperatures present the most immediate threat, Colville Tribes Principal Biologist Chris Fisher told participants on the Similkameen outing.

Steelhead salmon have a four-year life cycle, spending two years in freshwater and two in the ocean. On average, only 1% of adult steelhead return from the ocean to spawn in their native streams. So, when the offspring of those 87 fish return in 2025 to lay their eggs, biologists expect zero to two fish to make it back, Fisher said.

“It only takes one day over lethal water temperatures for the fish to lose oxygen and suffocate,” Fisher said. “To allow these fish to survive, the dam has to come out soon.”

While the still pool behind the dam has some warming effect on the river, the real benefit to dam removal in terms of steelhead survival would be access to more than 300 miles of habitat in the Similkameen basin in British Columbia. Scientists who’ve been evaluating salmon habitat found temperatures between 13 and 15 degrees Celsius in the Ashnola Basin there, Fisher said.

Some people see considerable economic potential for the Oroville area if the dam were removed. But others worry that an influx of recreationists could overwhelm the area and spoil the quiet lifestyle.

The Similkameen Trail runs along the river for a couple of miles and connects with the Pacific Northwest Trail, which goes from the Continental Divide to the Pacific Ocean. Mountains in the area offer rock-climbing opportunities.

The Similkameen is unique because a lot of it flows across bedrock, creating a mix of shelves and deep pools, Methow Rafting co-owner Dylan Marks said. Marks had rafted on the Similkameen on his own, and he and co-owner Brandon Bertelsen scouted the river for last week’s trip.

No commercial outfitters currently offer trips on the river, but Methow Rafting has been intrigued by the possibilities. The discussions around Enloe Dam have increased their interest, since it could open up a longer section. “We have a beautiful river within our county that’s not utilized for recreational opportunities. It’s so unique and so beautiful — it’s a special place,” Marks said.

But noting the pressures that can turn the Methow Valley into “a total zoo” as more people come to ski, climb and hike, a community member on the river trip worried about similar impacts on Oroville. “Not everyone wants growth. Some people move here to get away from things,” said another.

Oroville Mayor Jon Neal, a lifelong Oroville resident and a candidate for Okanogan County commissioner, joined the trip for additional perspective on the Similkameen. Neal said most people he’s talked to don’t want to see Enloe Dam removed. He hoped the trip would help him learn more about Enloe and the issues surrounding it.

Salomon worked with the budget committee to fund a study on Enloe Dam currently underway by the Washington Department of Fish and Wildlife. He also helped obtain funding to study dams on the Snake River.

“Salmon are the icon of the Pacific Northwest in so many ways,” and his constituents understand that it’s a statewide issue, Salomon said. “The river systems are part of a large ecosystem. There’s no salmon that stays in my district,” he said.

Funding for the Similkameen trip came from MVCC members and donors that support MVCC’s community-outreach work, Super said. In addition to its role as an advocacy organization, MVCC works to bring together key stakeholders and community members on various issues.