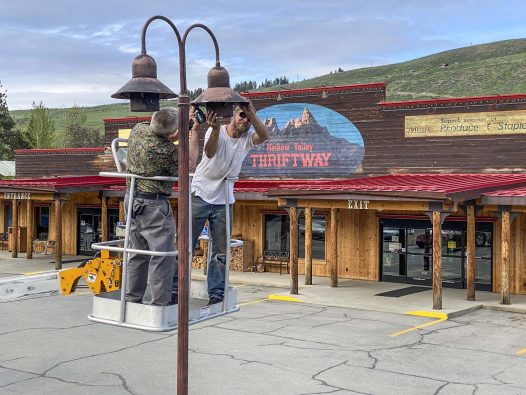 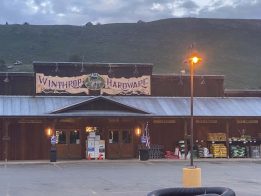 Before the new baffles were installed … 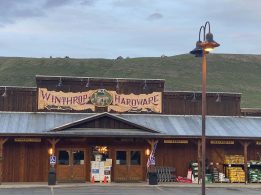 As residents of the Methow Valley take in spectacular starry nights this summer, the Methow Dark Sky Coalition continues to work little by little to make the town of Winthrop a dark sky community.

According to the International Dark Sky Association, an international dark sky community is a city or town that “adopts quality outdoor lighting ordinances and undertakes efforts to educate residents about the importance of dark skies.” Kyrie Jardin, president of the Methow Dark Sky Coalition, said the organization is currently focused on work surrounding light ordinances, community education and monitoring to reduce light pollution and preserve the Methow Valley’s dark skies.

Jardin said the mission to become a dark sky community emerged a few years ago, when Bonneville Power Administration made LED lights available to customers of the Okanogan County Electric Co-op. The new lights, which were brighter and bluer than Winthrop’s existing ones, quickly spurred complaints from neighbors. This response was a catalyst for conversations about preserving Winthrop’s dark skies, as well as the town’s adoption of new lighting ordinances in 2021.

One initial step for the Methow Dark Sky Coalition was installing cylindrical baffles over the streetlights in downtown Winthrop. These baffles limit light pollution by directing light straight down, rather than out. More recently, the coalition installed baffles at Winthrop’s Thriftway grocery and Ace Hardware in the spring. The baffles were made by metal artist and fabricator Barry Stromberger, and installed with a lift provided by Triple T Roofing.

Jardin said light pollution, particularly blue light, disrupts night vision in both humans and animals. He believes that although light is necessary, it should only be used when, where, and to the extent it’s needed.

“Everything in the world has grown up with a diurnal rhythm of light and dark, winter and summer, dry and wet. And I think when you have lights on all the time, you disturb that ecological rhythm,” Jardin said. “You don’t need to light a shrub at three o’clock in the morning, right?”

A long-term goal for the Methow Dark Sky Coalition is to make the Methow Valley area an international dark sky reserve — an area consisting of a “dark ‘core’ zone surrounded by a populated periphery where policy controls are enacted to protect the darkness of the core,” according to the International Dark Sky Association.

Becoming a dark sky reserve is an ambitious goal. Jardin said for the meantime, Methow Dark Sky Coalition’s team of six is working incrementally to protect the night sky.

“Because we’re so small, biting off a dark sky reserve is a pretty good chunk to bite off, so we have to work at it little by little in our neighborhoods, and get more people and get more awareness out there,” Jardin said. “What we try and focus on is inspiration, beauty and education.”

Jardin said contributing to a dark sky community could be as simple as connecting security lights to a motion sensor so they’re only on when they need to be, or painting a door a darker color so lights don’t reflect off it as harshly. Another component of the coalition’s work is education.

As it turns out, the Methow Dark Sky Coalition isn’t the only group that has used the stars to bring people together. Amid the Perseid meteor show, which began July 17 and peaks Aug. 11 and 12, the Methow Conservancy and Sun Mountain Lodge have also hosted “star parties” for the community, complete with remarks from astronomers.

The Methow Valley’s stunning night skies offer an option for eco-tourism, particularly during the shoulder season, Jardin said. But to him, they also offer something spiritual.

“We are so tiny-small, we are stardust, you know,” Jardin said. “Truly everything on earth came from a star, and when you look out you see where you came from.”