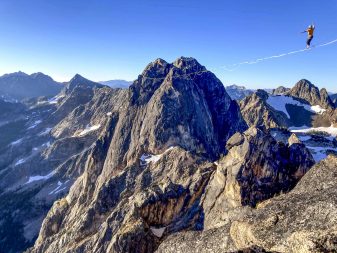 Photo by Danny Schlitt Garrison Rowland of Morro Bay, California, was one of nine highliners who made the lofty crossing on a line they rigged with the help of a drone. 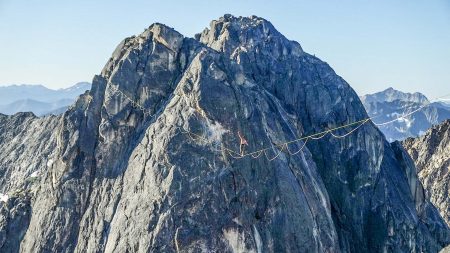 Photo by Taylor Humphrey Sverre “Scooter” Finney made a successful highline crossing, 800 feet above the ground, at the Liberty Bell/Early Winters Spires.

In a “meditative, spiritual” activity, 10 people recently walked 800 feet above the ground on a highline just 1 inch wide, strung between the towering Liberty Bell and Early Winters spires in the North Cascades.

The crossing between the two peaks spanned about 1,100 feet in distance, and was visible from the highway below.

After meticulous planning, the group of 13 highliners — 12 men and one woman — anchored the extra-strong woven webbing to natural features, attaching it to four trees and two boulders on the Early Winters spires and to a huge boulder on the Liberty Bell side, said Sverre “Scooter” Finney, who helped organize the activity.

Nine of the group members crossed between the spires, taking advantage of calm conditions in the mornings and evenings over the course of several days at the end of July. All but two crossed the gap without falling, Finney said. Highliners are attached to the line with a climbing harness and a “leash” that catches them if they fall.

They had to wait for the wind to die down, since strong winds can pull you 10 feet in any direction, making crossing mentally and physically more difficult, Finney said. Each crossing took about 20 to 30 minutes.

The feat took careful orchestration. Group members climbed to each anchor point using standard rock-climbing techniques and then used a small drone to rig the line and pull a series of ropes and other equipment across the gap. People on each summit anchored the highline to the rocks and trees, Finney said.

In some areas, people need a permit for highlining, but the ranger district doesn’t require one unless it’s a commercial activity, Winters said. Finney contacted Winters in advance about their plans and also notified local climbers via social media.

The highliners set up the line on July 26 and took it down manually, without the drone, on July 30. Finney and some friends attempted the same crossing three years ago, but had technical problems with their drone and abandoned the effort. This time, with painstaking coordination and logistics, it went flawlessly, he said.

Highlines are typically set fairly loose, with a tension that sags to a distinct V shape when people walk across, Finney said.

“It’s not just about doing it and not falling — it’s more about going up in the mountains with friends. It takes a lot of calmness and peace of mind to be able to be out there. You have to be in a meditative state,” Finney said.

Highlining has similarities to rock climbing, in that both demand utmost concentration and an exceptionally meditative state. Finney likened it to the “flow state” that musicians, artists and athletes attain when they are completely absorbed. “You tap into it — you’re not really thinking, just performing,” he said.

“Highlining brings this mental state to the forefront because the only thing is space, and the only thing you’re walking on is a 1-inch strap,” Finney said. “You will be terrified if you don’t trust your gear.”

While highlining and rock climbing are closely linked in terms of their culture, history and equipment – and even some of the required skills such as focus, balance and mental control — they are very different activities, Winters said.

“In its simplest form, slacklining is balancing and walking on a piece of flat webbing between two points. Unlike a tightrope, the line sags and bounces, making it much more difficult,” Winters said. Highlining involves complex rigging and the ability to manage fear and vertigo, he said.

‘Fun in the face of adversity’

Finney, who lives in Bellingham, is used to being off the ground, since he works as a climbing arborist. But, even with years of experience crossing highlines above rivers and between mountain peaks, Finney acknowledged that, while doing it, you’re in an “improbably terrifying place.”

“To walk, you have to be really relaxed and do it with as little effort as possible. It takes a lot of mental focus to maintain relaxation. Effortless action takes a ton of effort,” he said.

Finney started slacklining 10 years ago and progressed to crossing at higher and higher elevations a couple of years later.

People often start slacklining by stringing a 2-inch-wide line between trees in a park, which is easy to set up with a ratchet system. When the line is lower, it has to be more taut so it doesn’t touch the ground. People then progress through midlining, at 30 to 50 feet off the ground, and then to highlining, the term generally used for slacklines that are 100 feet in the air, Finney said.

When you first walk on a line, Finney admitted that it feels entirely impossible. “Being out there in the first place is so difficult and mentally terrifying that it’s hard to balance,” he said. On top of that, the webbing is sharp and hurts your body. “It’s safe, but it’s terrifying,” he said.

Slacklining appealed to Finney’s sense of adventure. He grew up skateboarding, but felt constrained because it kept him around concrete. He started hiking in the woods and then was drawn to highlining, in part because it puts your body in a place you otherwise couldn’t go, an experience he called “fun in the face of adversity.”

As you cross, you look for opportunities to stop and turn 90 degrees to take in the view. Being so focused enhances the view, Finney said. “It’s almost like being high on drugs — the breathing, focus, meditation — it’s amazing,” he said.

Although highlining is becoming more popular, many park and land managers don’t anticipate the activity and therefore don’t have explicit rules or permit requirements, said Finney, who’s made dozens of these crossings all over the United States and in Norway, Mexico and Thailand.

Many people think highlining is adrenaline driven, but Finney called that a misconception, since the activity is necessarily slow, calm and relaxed.

Although crossing without falling isn’t the point, it feels like a huge accomplishment to have done so, Finney said. “I’m happy and proud. It’s valuable to have tried my hardest and to push the limits of my physical ability,” he said. “It teaches you not to give up just because something is hard.”

Finney said he’s gained incredible wisdom over the years from this pursuit. The focus and calm he’s learned in the mountains have helped him stay relaxed in mundane, daily situations on the ground.