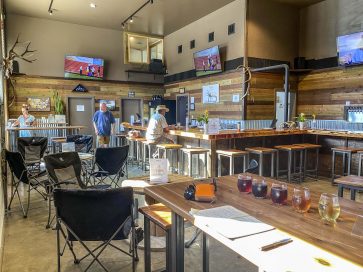 Photos by Ashley Lodato The interior of the 6 Point Saloon, above. Mark Frederick, right, with a flight of the five 6 Point ciders. 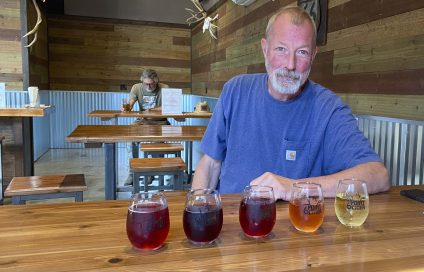 The vibe was low-key at the 6 Point Saloon, with three giant screens broadcasting the World Athletic Championships and another showing dirt bike racing, volumes muted. It was cool and quiet, more mellow than hushed — a pleasant aprés-work atmosphere, with a couple of patrons on bar stools, several others outside, and a few at tables.

Mark Frederick, co-founder and chief brewer of 6 Point Cider, alternated between serving customers and sitting down at their tables to chat for a while.

Frederick and his former partner, Brandon Boren, recently moved their hard cider wholesale operation from Leavenworth to Twisp, with a production facility in the Konrad development, on the site of the old Blue Spruce Motel, and a retail saloon leased in the former Blue Star Coffee Roasters building at 3 Twisp Airport Road.

Both with carpentry and contracting backgrounds, Boren and Frederick built the tables and stools, with metalwork fabricated by Twisp resident Ken Ruprecht. The quality is obvious; heavy and gleaming, the furniture is beautiful, understated, and built to last.

After finishing the remodel, Frederick bought Boren’s share of the company from him and is running the business solo, with a partner on the west side who eventually plans to relocate to the Methow Valley. Frederick’s young adult son is working for 6 Point Cider as well, overseeing the production facility and prepping equipment.

The five 6 Point ciders are gorgeous, a rainbow of red-family hues ranging from pale pink to deep purple: Apricot, Tart Cherry, Blackberry, Elderberry, Black Currant . They’re all made from the same apple base, Frederick said, sourced regionally. “A lot of people — especially guys — tell me ‘I’m just not a cider person,’” Frederick said. “They all assume it’s too sweet. But then they taste one of our tart ciders and they become regulars.”

The cider industry isn’t growing like the craft beer and wine industry, Frederick said, but it’s a solid niche market. 6 Point Cider has refined its formulas over time, with an early experimental process. “We started brewing in 75 five-gallon carboys,” Frederick said. “Only two of them were good.”

Frederick’s background is in the tech world; he worked for Microsoft until 2010. When he began seeking an exit strategy, he brainstormed various business ideas, including a Redmond pub and a dog boarding facility. In partnership with his wife, Frederick opened Mountain View Dog Ranch in Snohomish in 2012. Business boomed.

“Eventually my wife fired me from the dog business,” Frederick joked. “Now she runs the dog ranch and I run 6 Point Cider.” But Frederick remains dog-friendly, tolerant of the canines who lounge at their owners’ feet in the covered outdoor space in front of the saloon.

Although the saloon currently offers only bar snacks — chips, nut mixes, granola bars — Frederick plans to use the venue’s commercial kitchen for panini, soups and salads, sandwiches, teriyaki, smoked meats and Philly cheese steaks. “I hope to offer a more full menu by the end of the summer,” he said.

Before he was a tech guy, Frederick was in the restaurant and bar business. His food and bartending experience gives him the hospitality skills required of a successful pub front man, while his tech career made him a meticulous program and project manager with great attention to detail — a critical skillset for the precision required of brewers.

Supply chain issues created by the pandemic remain for Frederick and other brewers. Minimum orders for canned products used to be 400,000 cans — one semi-truck full. Now there are five semi-truck minimums. “It’s why you won’t see many of our ciders in cans,” Frederick said.

Frederick has kept the 6 Point Saloon open seven days a week this summer, but due to staffing challenges he has recently worked more than 30 days straight and said he plans to close the venue on Sundays, the slowest day of the week, for the foreseeable future. He has big plans for the saloon’s expansion, though.

“I’m going to build it out so we can have a regulation pool table, darts, an adult game room,” he said. “Corn hole outside, a couple of fire pits for the winter. I’ll open early on Saturdays for college football.”