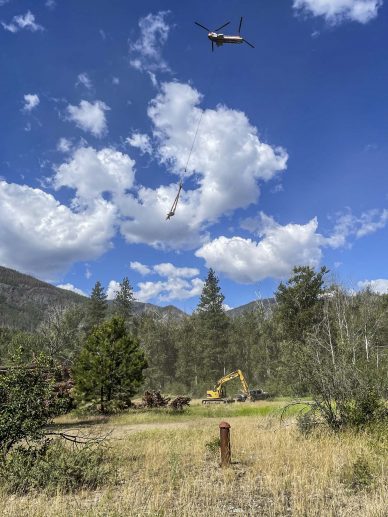 Photo courtesy of Pat Leigh A helicopter picked up logs for the Methow River restoration project. 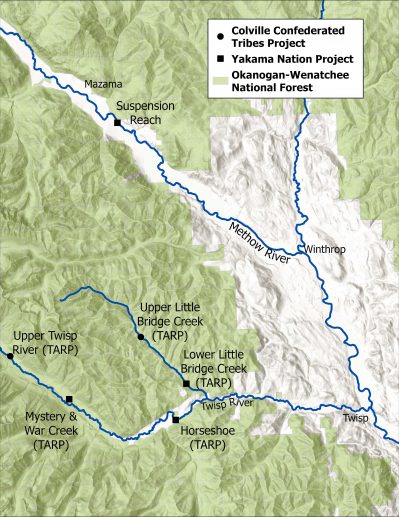 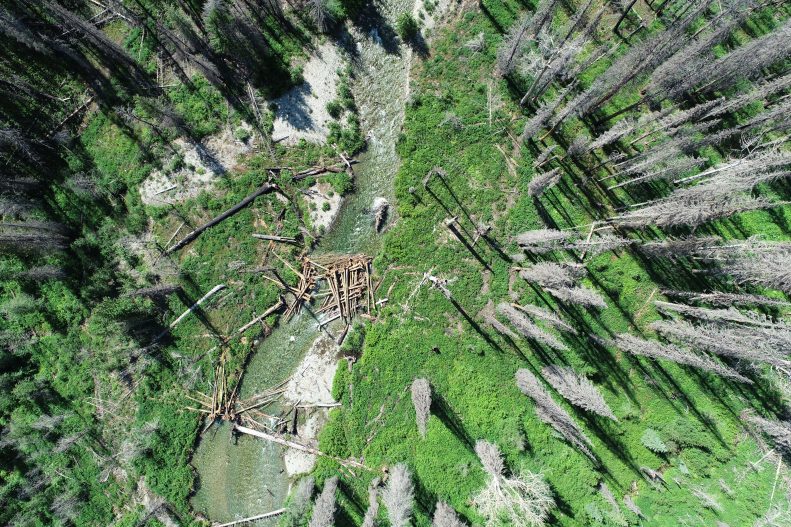 Photo by Matt Young An aerial view of a habitat restoration project on the Twisp River.

This month, the Yakama Nation and Confederated Tribes of the Colville Reservation began construction for fish habitat restoration projects along the Twisp and Methow rivers.

The two entities, which are working independently on adjacent sites along the Twisp River, oversaw the transport of hundreds of logs to project sites via helicopter earlier this month. Now, that timber is being used to create log structures in the water, designed to restore critical habitat for endangered fish like spring Chinook, steelhead and bull trout.

“It’s a very exciting time to be in habitat restoration, because people see the impact that we have had on the environment,” said Jarred Johnson, fish biologist for the Yakama Nation Fisheries. “We actually have the ability to improve that and leave it better for future generations.”

Fish play an important role in ecosystems and serve as a cultural resource for the Yakama Nation and Confederated Tribes. Restoration of endangered fish habitat will be completed under two distinct projects.

The Suspension Reach Fish Restoration Project will install 11 log jam structures along 0.6 miles of the Methow River near the Tawlks-Foster Suspension Bridge. The project is managed by the Yakama Nation in partnership Methow Trails, Okanogan County, the Okanogan Wenatchee National Forest, the Department of Natural Resources, the Washington State Department of Fish and Wildlife and many private landowners. It is funded by the Yakama Nation through the Bonneville Power Administration’s (BPA) Columbia Fish Accords agreement and the Department of Natural Resources.

The Twisp Aquatic Restoration Project (TARP) will include the installation of more than  150 log jam structures along 11.9 miles of the Twisp River and Little Bridge Creek watershed.

Both the Yakama Nation and Confederated Tribes have worked closely with Okanogan Wenatchee National Forest district staff for the project.

A primary focus of the restoration projects is to increase fish populations by reestablishing wood structures that were once abundant prior to logging operations and wood removal along the waterways, said Matt Young, fisheries biologist for the Confederated Tribes of the Colville Reservation.

“This is a dynamic project in a dynamic river,” Young said, referring to the Twisp River. “What we’re really trying to do by putting the wood in here that would have historically been present is to kickstart some of the natural river processes that haven’t been able to occur for a long time.”

Johnson said log structures and woods accumulations allow a river to meander, creating complex floodplain habitats that fish have evolved to live in over thousands of years. If those accumulations are removed, the river will straighten, reducing available habitat for fish.

“The more wiggle [a river] has, the more length there is, and the more habitat there is,” Johnson said. “The straight line, it’s going be the shortest distance possible, so it’s going to be minimizing the habitat that’s available.”

Wood accumulations also help increase habitat diversity and complexity, Johnson said. Often, a small island will develop in the lea of a log jam, creating a protected, vegetated area for fish to hide from predators and rest. Log jams can also create pools of cooler, calmer water for fish that are rearing and spawning.

By comparison, a straight, wood-free channel will be more uniform in speed and temperature.

“From a fish’s perspective, if you’re trying to live in this flat, fast water that doesn’t have a lot of diversity in front of us, it takes a lot more energy to live right here than it does on the other side of that log where it’s nice and calm,” Johnson said.

In addition to increasing meander and creating habitat and pools for fish, some wood placements along the Twisp and Methow rivers will be used to control erosion near human structures like trails and bridge abutments.

Timber for both the Suspension Reach and Twisp River projects was harvested from near Okanogan and Kettle Falls, and additional small trees and slash were harvested locally in the Twisp watershed for use in TARP. After being moved to staging areas, both the Yakama Nation and Confederated Tribes used a Boeing Vertol helicopter to lift and move the wood to project sites.

Young said using helicopters, rather than heavy on-the-ground equipment, minimized impacts to nearby habitats and vegetation. It also saved time, turning what might have been a years-long on-the-ground operation into a two-week project.

“It was a no-brainer to use a helicopter to bring the logs in, because it’s the best way to reduce any impact on the neighboring forest,” Young said. “It’s the very least amount of impact to get the most amount of benefit for the ESA-listed species.”

Although several of TARP’s log structures were constructed using a helicopter, some sites will require excavators to finish construction through mid-August. Trail goers can also expect to see excavator construction taking place on the Methow Community Trail and Lunachick Trail from July 25-Aug. 10 for the Suspension Reach project.

While construction will have some impact on vegetation and trail use, Johnson said those impacts should be viewed in context with the more permanent positive impacts of the restoration projects. Logjams tend to be long-term investments, lasting upwards of 50 years.

“For a species that are on their way toward extinction, that’s a very important amount of time to be trying to do something to preserve their existence,” Johnson said. “Without this type of work and the work by a lot of other people, such as hatcheries, we aren’t going to have the opportunities to see wild salmon on their spawning grounds in the Methow.”

The significance of fish

Fish like spring Chinook migrate between freshwater and saltwater, rearing in rivers like the Twisp for a year before traveling to the ocean. When returning to freshwater to spawn, they bring back vital ocean nutrients, Young said. Their carcasses also feed many other members of the river ecosystem, including otters, eagles and trees.

Fish also hold spiritual significance to the Tribal agencies directing the two restoration projects. Current restoration projects along the Twisp and Methow rivers are situated on the traditional homelands of the Methow people, one of 12 bands that make up the Confederated Tribes of the Colville Reservation.

Mark Miller, a Methow descendant, recalls fishing and camping along the Twisp River as a child. As a 12-year-old, Miller caught and smoked salmon with his grandfather, bringing it back to give to Methow elders. One recipient, an older woman, remains in his memory years later.

“She started crying right away,” Miller said.  “I was scared — I thought I did something wrong in the preparation. And my grandfather explained to me that the fish that she was eating made her spirit young again.”

Miller said salmon are a traditional food among the Methow people. When the first spring Chinook return to the Twisp and Methow rivers each year, Methow descendants hold a first food ceremony to honor the fish, said Randy Lewis, a member of the Methow and Wenatchi people.

“It’s very important for us as a treaty fishing tribe to make sure that the spring Chinook salmon will always be coming back to through the Columbia River up into their spawning ground,” Vice Chairman Lewis said. “Those generations that are yet unborn have to experience a little bit of the salmon the way that some of us who are older have seen.”

To Randy Lewis, the Methow and Wenatchi descendant, projects like TARP have meaning not only for the Methow people, but also for the broader community. Because fish like salmon are so interconnected with the plants, animals and people in their ecosystems, their recovery impacts everyone.

“Save the salmon and you will save the people. And I’m not just talking about Methow people, I’m talking about all people,” Lewis said. “So, what does it mean to me? It means everything, it means life.”