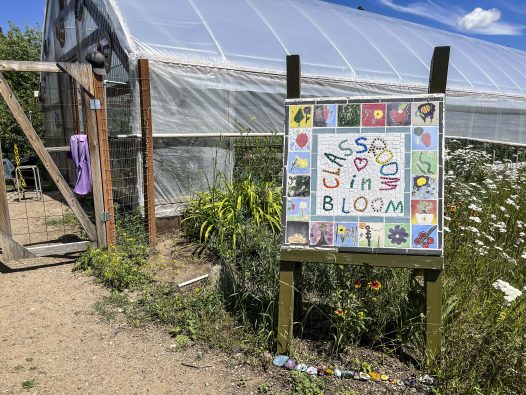 Classoom in Bloom is on the school district campus. 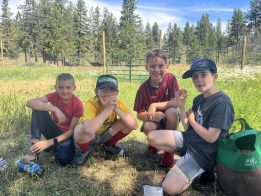 From left, Ryker, Huxley, Mars and Pierce enjoyed a break from camp activities. 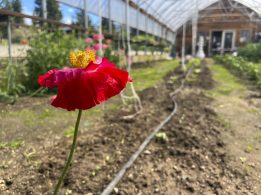 Classroom in Bloom’s greenhouse is a lush setting for all plants.

By 10 a.m. on a July morning, the garden between Methow Valley Elementary School and Liberty Bell Junior/Senior High School is already astir with excited chatter. Through the wooden gate, past the greenhouse, and up above well-watered rows of raspberries, marigolds and leeks, more than a dozen elementary schoolers gather for Classroom in Bloom’s second week of summer garden camps.

Their first objective of the day? Crawl through a giant spiderweb.

Classroom in Bloom is a nonprofit focused on youth education. Through classes and workshops during the school year, as well as its annual summer camps, students have the opportunity engage in planting, harvesting and experiential learning. This month’s summer camps, offered to children ages 6-11, come to a close July 21.

“We really want to make sure that families have places for their kids to be in a healthy, safe space for the summertime,” said Kim Romain-Bondi, executive director of Classroom in Bloom.

In a gazebo above the garden, camp-goers puzzle at their spiderweb conundrum. The adults have strung yarn between the two wooden posts at either entrance, creating a maze of string resembling an extra-large arachnid’s home. The goal is for each camper to squeeze through a different gap in the web — without touching the string.

Campers get creative, shimmying through tiny spaces, cheering on their peers and dragging one another on the ground underneath the lowest openings.

“You can work together to help people,” said Ryker, an incoming third grader who’s been involved with Classroom in Bloom since first grade.

Classroom in Bloom focuses on a different topic for every new session of summer camp. Sundstrom said week two’s campers could look forward to themed activities like weaving and making native bee homes, as well as additional art projects like painting the walls of the garden’s root cellar.

Each camp session also includes a “tasty tour” of the garden, where campers have the chance to sample different edible plants growing on the property. Back at the gazebo, they waste no time splitting off into groups to go explore.

Campers line the bottoms of their baskets with strawberries, lettuce leaves and sugar snap peas. They pluck delicate nasturtium and borage blossoms, nibbling at the petals of the edible flowers. A couple are even brave enough to munch on stalks of raw rhubarb.

Pierce, Huxley and Mars, three incoming third graders, each have some favorite garden finds. Pierce said his favorite snacks are strawberries and, later in the season, apples. Huxley is a fan of fresh carrots and sorrel.

“I like washing all the carrots up and getting to eat them,” said Mars, who’s been going to Classroom in Bloom summer camps since he was 5. He recalled one summer where he and his fellow campers went on a garden scavenger hunt for different ingredients to make soup, gathering humongous bundles of carrots to prepare and cook.

Romain-Bondi said the garden’s abundant harvest is thanks to the hard work of the children involved with Classroom in Bloom.

“Everything you see here has been planted by students,” Romain-Bondi said. “The rows might not be perfectly straight, because they’re all student-planted. [But] it’s amazing what a second-grader can do. They’re so capable.”

During the school year, Classroom in Bloom works closely with the Methow Valley School District to get students out in the garden. Each of the classes at Methow Valley Elementary School visit the garden for an hour a week, part of which is dedicated to a hands-on science class, and part of which is dedicated to working in the garden. During the winter, they participate in indoor activities like cooking classes.

Students in first, third and fifth grade plant seeds in the spring, while students in second, fourth and sixth grade get to harvest in the fall, giving each class the chance to see their work through its full cycle, Romain-Bondi said.

Older students also have opportunities to work in the Classroom in Bloom garden. The organization partners with eighth-grade humanities, health and wellness, and science classes, as well as Liberty Bell High School’s horticulture students.

Romain-Bondi said outdoor, experiential learning in the garden often opens doors for students who struggle in a traditional classroom.

“They come out here and they more than excel, this is their space, this is where they do well,” Romain-Bondi said. “So it’s actually kind of a cool opportunity to serve a diversity of students.”

By mid-afternoon, campers have settled into quiet spots around the garden for silent reading. As they flip pages in the shadows of large trees and beside long rows of leafy greens, the excitement of the morning still clings to the air.

“You can see it all over their person when they come out to the garden, how their eyes light up and they really come alive,” Sundstrom said. “They’re forming connections that they can take with them their whole lives, and hopefully make them conscious stewards of their environment wherever they end up living.”