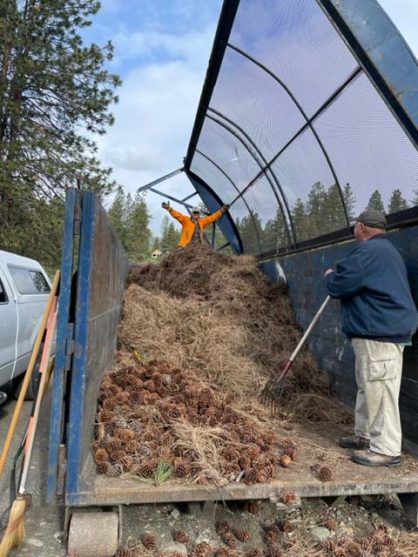 Photo courtesy of Karen Mulcahy Residents of Sun Mountain Ranch in the Twin Lakes area collected 4.74 tons of yard waste, which was taken to a landfill. 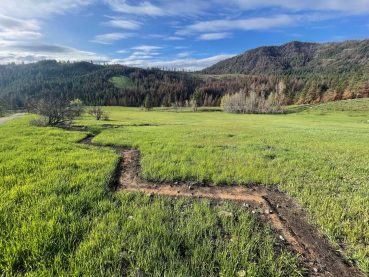 Photo courtesy of FAMV After the Cedar Creek Fire, grass came back in this meadow, but the fire burned so hot where the fence was that it left a zigzag trace. 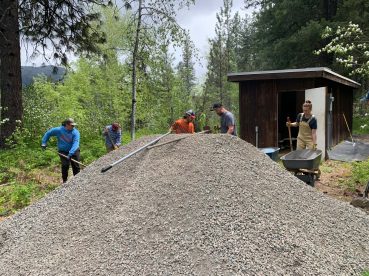 Photo courtesy of Gilda Wheeler Liberty Woodlands residents protect their pump house and well by clearing vegetation and surrounding them with gravel.

The increasing frequency and severity of wildfires — and an understanding of what it means to live in wildfire country — has prompted hundreds of property owners around the valley to team up in work parties to clear brush, limb trees and load chippers.

“The recent fire cycle definitely got people’s attention,” said Bob Rivard, a lifelong firefighter and former smokejumper who is co-coordinator of the Buttermilk Firewise community.

“Last year’s Cedar Creek Fire scared everyone,” said Gilda Wheeler, board president of Liberty Woodlands near Mazama. “People are very much on board” with a new philosophy that replaces forested seclusion with open spaces around homes, she said.

It’s all part of a collaborative effort to make their homes and properties more fire-resistant and better adapted to an area where wildfire is part of the ecosystem. Many people got powerful evidence of the effectiveness of their work last summer when their homes survived the Cedar Creek Fire unscathed, even though the fire came within feet of some houses. In many places, having removed trees and brush in advance made it safe for firefighters to stay and defend homes.

These communities benefited from help from Fire Adapted Methow Valley (FAMV), which connected them with specialists and grant programs run by the state Department of Natural Resources (DNR) and the Okanogan Conservation District. FAMV also provides information about simple interventions — like screening vents to keep out embers and moving trash cans away from the house — and recommendations for fire-resistant plants.

“Wildfires make big news, but the really big news in the spring here is that individual neighborhood groups engaged in active preparedness,” FAMV Program Coordinator Kathryn (Kat) Heim said. “They worked together to bring in a chipper, or a crew to thin and limb common areas and roads” to make it safer for residents and firefighters to get in and out.

FAMV emphasizes education and awareness —the organization helps people understand what to do, how to prepare, and how to be safe. Having defensible space around your house doesn’t guarantee it will be saved, but it greatly increases the odds, Heim said. In areas where it was too dangerous for fire crews to be on site, advance thinning of trees and removal of low limbs kept the fire away from houses.

Many of these neighborhoods are officially designated as Firewise communities, but others are simply working together to become better adapted to living with fire.

The 2014 Carlton Complex Fire, which destroyed hundreds of homes in and around the valley, was a big eye-opener. Before that, only one neighborhood held annual picnics and work parties, Heim said.

The communities take different approaches. While some clear brush, others concentrate on emergency planning so everyone knows what to do and anyone with special needs is accounted for, Heim said.

Often, people who move here from other areas — particularly wet western Washington — are attracted to the privacy of a house nestled in a forest. But a safe, natural environment in the arid Methow Valley looks quite different.

When Liberty Woodlands, which backs onto National Forest land, was originally platted, the developer wanted to leave as many trees as possible to create a sense of privacy, Wheeler said. But recent fires brought increasing awareness that the dense forest posed a risk.

Now, Liberty Woodlands is eliminating places where tree crowns touch, and selectively removing trees to create a fire break. Liberty Woodlands has also protected the wooden pump house around its well by clearing vegetation and surrounding it with gravel.

Work parties are also a good way for neighbors get to know one another, particularly when some are only part-time residents, and many have spurred friendships. Liberty Woodlands has 60 lots, about half with houses, but only about 10 are occupied full-time. “The work parties have been really fun, productive and fulfilling,” Wheeler said.

In addition to hiring specialists to cut and chip big trees, Liberty Woodlands used a grant from DNR to buy a chainsaw and hand tools for smaller projects they can handle themselves.

Even with assistance from DNR or the conservation district, homeowners need to contribute financially or in volunteer hours, since grants typically require a 50% match.

Forest Health Assistance for Small Forest Landowners: Owners of small forests can schedule a consultation with a DNR forester. DNR helps with noncommercial thinning of small-diameter trees (up to 8 inches in diameter). For larger trees, they can recommend a forester to develop a prescription for a commercial sale. Most eligible projects require a 50% cost-share. dnr.wa.gov/cost-share

The conservation district’s cost-share programs are funded by grants. The district currently has money for post-fire recovery (for example, rebuilding fences), but not for fire-preparation projects. The district hopes to have funds for chipping and mulching in the fall. www.okanogancd.org

Firewise USA: Guidelines for becoming a Firewise community, tips on protecting homes, and info about conducting wildfire-risk assessments. Opens eligibility for grants. The process must be community led and include at least eight households. www.nfpa.org/Public-Education/Fire-causes-and-risks/Wildfire/Firewise-USA

Sun Mountain Ranch, in the Twin Lakes area, is one of the valley’s newer Firewise communities, formed in 2020. It’s a big development, with almost 300 lots, 200 homes, and 120 full-time residents.

Becoming Firewise helped identify crucial interventions, said Karen Mulcahy, chair of their Firewise committee. The conservation district assessed all the properties and drew up an action plan. They started small — 20 homeowners signed on to do thinning. They got a grant for dumpsters to discourage burning of yard waste. And it’s worked — no one burns vegetation anymore, Mulcahy said.

Rivard drew on his firefighting experience to educate the extended Buttermilk community in the upper Twisp River. As new people moved to the area, he talked with neighbors about thinning and keeping their property safe. “Small parcels affect everyone,” Rivard said.

Buttermilk Firewise encompasses about 100 parcels, but isn’t associated with a formal housing development or homeowners’ association. “I just put a dot on a map and drew a circle,” Rivard said. Now, about 80% of the parcels have been treated, he said.

The Buttermilk area has been threatened by two recent fires — Crescent Mountain in 2018 and Cedar Creek last year. Residents organized into smaller neighborhoods in case they had to evacuate and identified anyone who needed help, said Emily Warn, their communications coordinator. “It’s been really critical to have points of contact,” she said.

Homeowners with larger forests have gotten help from DNR, which has connected them with a forester to arrange a sale to a lumber mill to defray the cost of logging.

Pine Forest residents were spurred to action by the 2015 Twisp River Fire, which came perilously close to their development on a steep hillside below Sun Mountain Lodge.

Since then, 90% of lots at Pine Forest have had timber thinned or ladder fuels and bitterbrush removed, their coordinator Heather Dean said. The development has 133 lots, 102 with a house, although only 27 are occupied full-time. Pine Forest has also posted signs about evacuation routes.

At first, Pine Forest’s Firewise group encountered reluctance about cutting trees, but today there are only two heavily forested lots left, Dean said. As people saw the results, they signed on. Selling trees to a lumber mill helped make it affordable.

“Everyone in the Methow — especially in Edelweiss — saw Cedar Creek, and we were so close to Cub Creek that it was a giant wake-up call,” Edelweiss resident Catherine Humblet said about the two fires that menaced the valley last summer. “We knew we needed more that 30 feet of defensible space.”

Because she and her neighbors shared a dense forest with large trees, Humblet understood that treating her 3-acre lot wouldn’t be enough. So five of them consulted with Jake Hardt, then DNR’s service forester and landowner assistance coordinator for the Northeast Region, about commercial thinning of large trees. Hardt now works for another division of DNR.

They ultimately removed a dozen truckloads of trees larger than 12 inches in diameter from 23 acres. Many communities aren’t able to remove large trees because it’s expensive, but Pine Forest and Edelweiss made it work by connecting with a lumber mill to offset the cost, Hardt said.

“Everyone was conceptually on board, but logging makes people nervous,” Humblet said. Local contractors helped them visualize the project, which left trees in irregular clumps for a natural look. “There’s so much more sunlight. The forest looks so much healthier,” Humblet said.

Edelweiss also took on small trees. Because it’s such a large community, with 290 lots and 200 houses, neighborhood coordinators encouraged people to sign up for a DNR cost-share, Firewise committee chair Craig Bartholomew said.

Since lots there are small, if some aren’t treated, it puts everyone at risk, he said. “Cedar Creek was a close call — I think it got everyone’s attention.”

The residents used a DNR grant for a dumpster where people could drop off their yard waste. It was so successful — they took 4.74 tons of yard waste to the landfill — that they plan to do it again this year. They bought a pole saw for cutting high tree limbs with a grant from the conservation district. The grant also pays for blue address signs to help emergency responders find a home, even in heavy smoke, Mulcahy said.

Being fire-adapted goes beyond clearing brush and choosing fire-resistant building materials. It also requires situational awareness about how to live well and safely in this environment. That includes knowing not to drive or park on dry grass and taking responsibility as a community if fire happens, Heim said.

Community organizers agree that the process takes time. People don’t want to lose their trees — but when they get scared, it builds awareness. “I like it to be natural, but we have to realize we live in this WUI [wildland-urban interface] — we’ve got to protect it,” Sun Mountain Ranch’s Mulcahy said.

“People recognize that fire happens and will continue, and that it can be near where people live,” Heim said. “Being fire-adapted is not a certification — it’s a continuous process.”