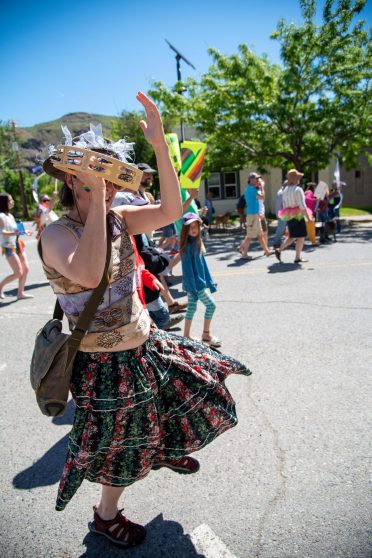 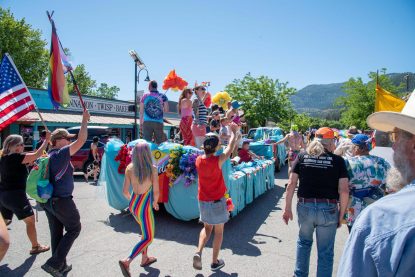 Photo by Steve Mitchell The Pride Festival parade proceeded colorfully down Glover Street on its way to more activities at TwispWorks. 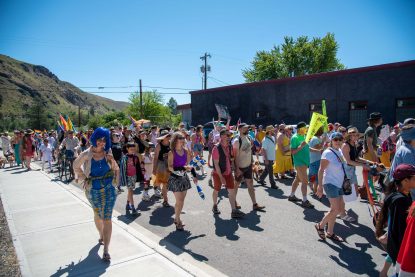 Photos by Steve Mitchell Participants in the Methow Valley Pride Parade and Festival were in a convivial mood on a pleasant day in Twisp. 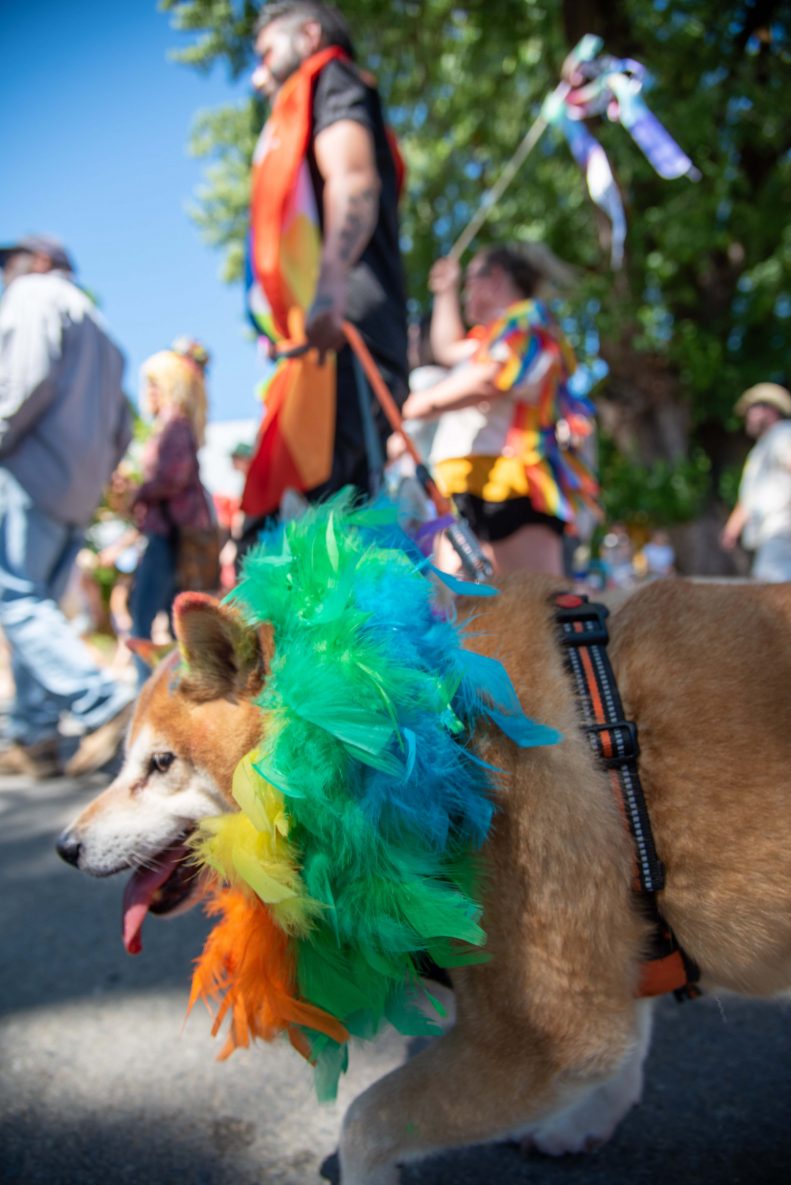 Sunday’s event served as an opportunity for members and allies of the Lesbian, Gay, Bisexual, Transgender and Questioning (LGBTQ) community to come together for storytelling, celebration and connection during the final weekend of LGBTQ Pride Month, which takes place every year in June.

Colbey Breed, an event organizer, said the vision for the festival was to create a space of belonging and inclusion. That focus is especially important in light of anti-LGBTQ legislation introduced this year, said Reba Baudino, a speaker at the event.

“Inclusivity is something that I believe strongly in,” Sarah Werneken, another event organizer, said. “And just creating a space that’s safe for everybody.”

The event began Sunday morning at Twisp Park, where participants of all ages — from elementary-schoolers to grandparents — made signs and decked themselves out in rainbow stickers and flags. By 11 a.m., participants began walking, cycling and roller-skating through downtown Twisp along Glover Street in a short parade ending at the TwispWorks campus.

Throughout the early afternoon, event-goers, many of them children, scurried up to the Plaza Stage at TwispWorks to compete for prizes. Activities included a fashion show, “best hair” competition and fruit-bobbing race, where participants dunked their faces into plastic tubs of water filled with whole apples, bananas and peaches.

Event-goers also had the chance to grab food and connect with community organizations like the Foundation for Youth Resiliency and Engagement, an Okanogan County nonprofit focused on youth outreach and advocacy.

Alongside the festivities, community members were also invited to share their stories.

Subhaga Crystal Bacon and Alex, a non-binary youth, both read poetry. Teenagers told stories of embracing their sexualities and gender identities. One attendee, who’d known he was gay for 60 years, formally came out for the very first time.

Melody Langan, a 17-year-old attendee, shared a message of hope.

Pride’s past and future

Baudino, the event’s keynote speaker, opened the afternoon with remarks on the history of Pride.

Pride was born out of a riot, Baudino said.

In the early hours of the morning on June 28, 1969, police raided the Stonewall Inn, a gay bar in New York City. Raids like this one weren’t out of the ordinary, Baudino said — at that time, it was illegal to be gay in every state in the U.S. except for Illinois. What made the event such a turning point, however, was the fact that this time the people fought back.

The uprising, which has come to be known as the Stonewall riot, lasted several days. The result, Baudino said, was a new movement. The next year in 1970, major cities like New York City, Chicago and San Francisco held the first gay pride marches.

Despite the progress the LGBTQ community has made, Baudino said the fight isn’t over. As of March, lawmakers had already proposed a record 238 bills that would limit the rights of LGBTQ Americans.

Baudino said she believes the June 24 Supreme Court decision to overturn Roe v. Wade, which provided legal precedent for the right to an abortion, also relates to LGBTQ rights.

Roe v. Wade is one of five major Supreme Court cases based on the 14th Amendment. The other four protect the right to use birth control, the right to interracial marriage, the right for consenting adults of the same sex to have sexual relations, and the right to same-sex marriage. Amid comments from figures like Justice Clarence Thomas, who recommended all but one of these precedents be reconsidered, Baudino is concerned for what the future may hold.

Baudino closed with a call to action: register to vote, vote and run for office.