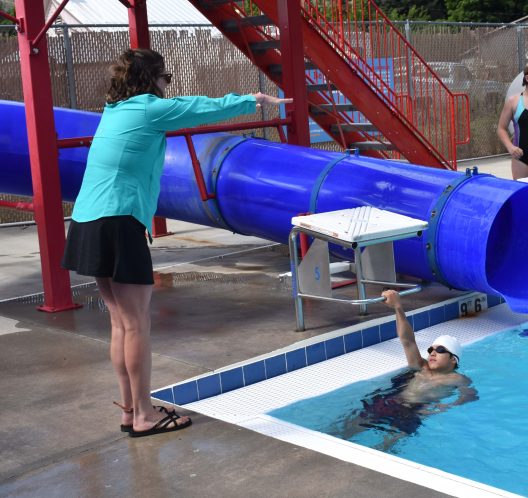 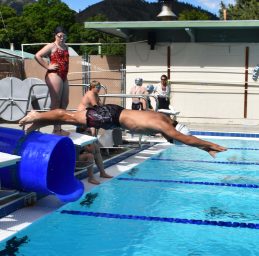 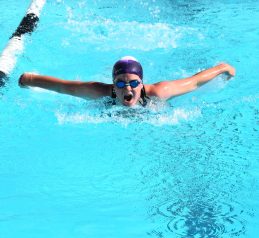 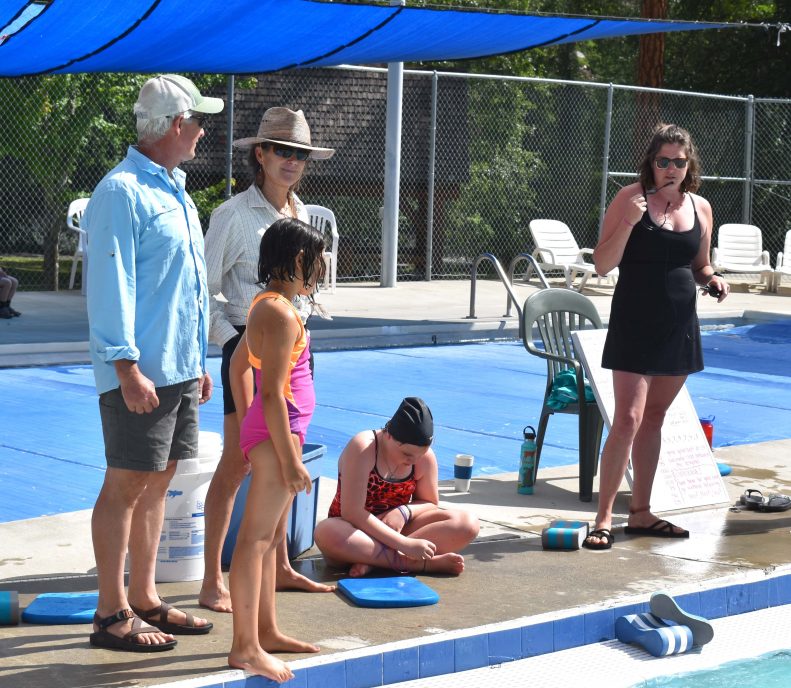 A malfunctioning boiler, timed perfectly with some unfavorable early June weather, got the 2022 season off to a dry start for the Methow Valley Killer Whales swim team.

Things have turned around as quickly as the repairs were made to the Wagner Memorial Pool’s recalcitrant boiler last week and the temperatures warmed. With the pool open and heated, and nearly 100 kids registered, the local swimmers began preparing for their summer season of swim meets.

Coach Katie Leuthauser is assisted by former head coach Bo Thrasher and Chuck Russell, a longtime volunteer for the program. Leuthauser is no stranger to local youth, serving as a science teacher at Liberty Bell Junior/Senior High School, and coaching in the track and field program.

Originally from upstate New York, she moved out west to the smallish southeastern Washington town of Bickleton, moving up to the Methow Valley a few years back. After serving as the assistant coach for the Liberty Bell track and field program, she accepted the head coaching position just in time for the ill-fated 2020 season, which never materialized, being an early victim of the COVID-19 shutdown.

It was also about then when she was diagnosed with Hodgkins Lymphoma, a form of cancer that infects the body’s blood and bones. Leuthauser described feeling an intense pain in the lower back and other parts of the body that triggered medical attention and confirmation of the disease.

“It was the exact same form that Mario Lemieux had,” she confirmed in an interview, referring to the former National Hockey League star and first-ballot Hockey Hall of Fame honoree of the Pittsburgh Penguins.

Leuthauser said they caught it “early when it was very treatable, and it lined up with all of the COVID stuff.” She is quite open about her episode and very thankful that it appears to be behind her. She goes in for occasional and regular testing, “but so far, so good.”

“We have some kids who are just learning how to swim, others who are strong swimmers that need to refine their form,” Leuthauser said of her team, “and some that are strong and fast.”

The kids range in age from kindergarten through high school seniors and are broken into four pods for practices and time in the pool. A pod, besides being a cleverly labeled group of young, enthusiastic swimmers, is also the term used to describe each of the three local communities (pods K, L, and M) of orca whales that inhabit the northern reaches of Puget Sound.

“We have several kids who decided to swim with us this year, even after graduating from high school,” said Leuthauser, who also swam in high school in New York, then for the State University of New York at Courtland.

“We are, literally, teaching many of these kids how to swim,” the coach explained. “And, of course, how to swim faster. Success is measured by their own personal improvement.”

Helaina Remsburg, who garnered some attention as a Mountain Lion eighth-grader who won varsity letters in basketball and softball this past year, continues a Remsburg family tradition of swimming that began way back in the 1990s with her mom, Amanda, aunts Georgia and Amber, and uncle Anthony all swimming on the local team. She is entering her freshman year at Liberty Bell this Fall, and uses the swim team not only for the competition, but also says that it helps her keep in shape during the summer.

“I love being active, and swimming is a lot of fun for me,” she said in a brief conversation poolside during a break in practice. “But, yeah. Swimming is great for staying ready for school sports, too.”

Leuthauser talked a little about the long term for the 50-plus year-old pool facility, originally built in 1966. “We started this season out on the deck,” she said, referring to a closure caused by a breakdown of the heating system boiler. “It was a part that broke, and we had to wait for it to be shipped and installed, which took us out of about two weeks in the water.”

When asked about the impact of a new pool that could serve the community year round, the response was direct: “It would be a game changer for the kids and community. We have had to shut down multiple times over the past few years, for weeks at a time, because of smoky conditions and breakdowns, during the biggest part of our season in late July. An indoor pool would be able to stay open for the kids, and for the community.”

She was also quick to point out that there are some kids in her group who would love to train longer than just the summer months. “It would be huge for our program, and for everyone else who wants to use the pool,” Leuthauser said.

The summer competition season consists of a series of dual meets between Omak, Brewster, Okanogan and Methow Valley. Kids are divided into classes by age, the youngest swimmers completing a single lap (one 25-yard length of the pool) and the older groups swimming distances between 50 and 100 yards. Meets consist of individual races in freestyle (American crawl), breast stroke, backstroke and butterfly, and a medley that includes all four strokes.

As well, a series of relays that range in distance from 100 to 200 yards and consist of both a single stroke freestyle and a medley relay are featured events.

Upcoming home meets are on Thursday (June 30) versus Omak, July 9 (Methow Valley Pentathlon), July 12 with Brewster, and July 19 with Okanogan. Spectators are welcome and there is no charge for admission.

The season runs through the month of July, culminating with the league championship meet at the Omak pool on Saturday, July 30. “We’d love to have people here yelling for the kids,” said the coach. All of the weekday meets start at 6 p.m.

Wednesday, July 30, is the annual Swim-a-thon where team members collect sponsors for the number of laps they swim to raise money to support team activities. Anyone interested in sponsoring swimmers, or supporting the team, can call the pool for more information, or check out the Methow Valley Killer Whales at http://mvkillerwhales.org.