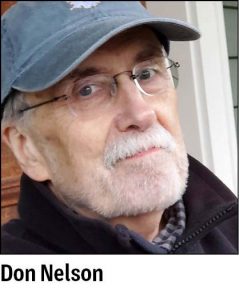 It was so nice to see you.

All of you. On a lovely day approximating summer, the grand opening of the new Winthrop library last weekend drew an eager and largely familiar crowd (estimated at more than 300), which gave me another opportunity to reconnect with people in the not-quite-post pandemic era. I enjoyed conversations or at least a “hello” with a lot of folks who I have seen rarely or not at all in the past few years, and met a few I had not known before. It was delightfully affirming.

And it was another reminder of how much socialization we missed out on as COVID considerations — well-founded, it turns out — restricted or eliminated most gatherings of any size. We’re still getting used to the idea of congregating in numbers.

Many of you, having read about my health challenges, inquired after how I was doing. Thank you for asking. The short answer is better, with some complications along the way (I’ll spare you the details). Although physical therapy is helping, my endurance has not fully recovered, so I have to parcel out my energy.

The library opening was about all I could manage on Saturday, but I wouldn’t have missed it for anything. The building is as promised — a welcoming space that reflects its community — and the crowds clearly enjoyed taking it all in. The kids in particular quickly figured out to take advantage the special offerings designed for them. I checked out a book, so I can claim henceforth that I was a first-day patron (along with 280 others). Not only did I engage in some rewarding talks, I also saw many knots of people in earnest conversation. For lunch, I scarfed down an excellent Kiwanis cheeseburger, with the option of yellow cheese, or yellow cheese. Easy choice.

Regretfully, I couldn’t make it to the Tim Egan event, which sold out with 300 attendees. I admire his work and I’m sure it would have been illuminating to hear him talk about it.

It was, moreover, an activity overload day in the valley. The Methow Valley Farmers Market was operating at full tilt Saturday morning  when I left Twisp. There was the Bike Rodeo at Pearrygin Lake, the free kids’ fishing day at the Winthrop fish hatchery, and the first CiderGrass Festival at the Doran Ranch near Twisp. Lots of choices, and I’m sure that some people made it to more than one, or one of the other options for action or entertainment on a nice day. And there are more coming as the summer heats up (if it ever does). Our stretched newspaper staff was augmented by freelancers who ventured out to take photos at several events, and I’m grateful for their willingness to help.

All in all, it was a great day for rebuilding community around an asset we can all appreciate. Between the library and its public meeting spaces, the building will get constant use. So if you weren’t able to make it last weekend, get on in there as soon as you can.

Check out the candidates

Speaking of gatherings, I’m pleased to report that the Twisp Valley Grange will host a candidates’ forum on June 27 to which they have invited the three contenders for the position of Okanogan County Sheriff who will be on the August primary ballot. Let’s hope all of them — incumbent Sheriff Tony Hawley, Twisp Police Chief Paul Budrow and former sheriff’s deputy Kevin Newport — are able to make it. It will be valuable for us to hear each of them make their case for this important position. You’ll find details about the event in this week’s newspaper.

As for COVID, it keeps reminding us that it’s not over. People are still getting sick, being hospitalized and dying. Some pandemic restrictions are returning in communities were the coronavirus is resurging by way of seemingly endless variations. In the past week, I have heard of several people I know —people who took precautions — testing positive for COVID, or just recovering from it.

Because I’m dealing with a compromised autoimmune system which leaves me susceptible to a lot of nasty stuff, it’s still pretty much imperative that I wear a mask in most indoor settings where there are more than few people. I’m not making a statement. It’s just too risky for me not to take precautions. I’m in a definite minority now, but I think it’s too soon to assume that we’re entirely out of danger yet.