Many favorite dogs — and people — over 15 years

These are just some of the more than 1,000 dogs that have stayed at Rover’s Ranch Dog Boarding over the years. Now, after 15 years of providing a home away from home for dogs from the valley and beyond, kennel owners Patrick and Kathryn Heim are detaching the leash and retiring.

When the Heims bought property and built a house in the Methow almost 20 years ago, they planned to spend weekends in the valley until they could retire in a couple of decades. But when they found themselves leaving at 3 in the morning to drive over the pass to make it to work on Monday, they knew they wanted to be in the valley full-time. 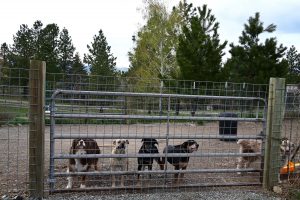 Kathryn telecommuted at first, while Patrick worked at a sandwich shop. And everywhere they went, they encountered dogs.

Patrick has an intuitive ability to relate to people and dogs, which he’s refined throughout his career. He worked for 19 years as a social worker and then spent four years running a dog-walking and pet-sitting service in Seattle.

As they asked around, they learned that the existing kennel in the valley, Aspen Kennels, was always busy. They talked with the owner, who said she often turned people away and gave them her blessing to add another boarding option.

After getting support from their neighbors, the Heims applied for a conditional-use permit from the county and converted and sound-proofed their garage. They opened Rover’s Ranch in December 2007, just half a year after they moved to the valley.

Their set-up includes a fenced play area and large fenced lawn. Depending on who’s staying at the kennel, it can take some juggling to match up dogs that want to play and preserve solitude for others. “Patrick has special skills with dogs that the rest of us don’t have,” Kathryn said. “If anybody was well suited for this job, it’s Patrick.”

They’ve had some scary moments. The kennel has been evacuated three times — twice during the Rising Eagle Road Fire, and at midnight during the Twisp River Fire.

During the Rising Eagle, they’d taken in extra dogs, for free, for people who’d lost their homes. Then, as people saw the flames from across the valley, they started showing up to help evacuate the kennel. The high school football team, friends and clients all came to assist.

The Heims loaded up their own four dogs and cat, plus seven kennel dogs, and started making the rounds, dropping off a few dogs with friends and family as they headed out of the valley.

While Rover’s Ranch specialized in dogs, they occasionally boarded birds. Cookie the parrot was there during a fire. “Talk about a canary in a coal mine. Birds are extra susceptible to smoke and he was wigged out because of the helicopters,” Patrick said.

COVID presented another set of challenges. At first, they closed the kennel, but then learned they were considered an essential service. Still, no one was traveling and they found themselves with empty kennels until they added day care, which proved popular — and gave long-time clients a way to support them, Kathryn said.

The Heims’ initial plan was to retire in 2024. But then last summer, their Cardigan Welsh Corgi, Tiberius, suffered a spontaneous rupture of a spinal disk, which left his rear legs paralyzed.

Tiberius is getting around fine, using a doggie wheelchair, but the experience made them rethink their plans. “Life is short — you don’t know what will happen,” Kathryn said. They ordered a travel trailer and are planning a trip to visit family in the Midwest, and then sightsee from Arkansas to New Mexico to the Rocky Mountains on their way back to the valley.

Tiberius loves camping and meeting people. “He’s so approachable in a wheelchair — he will have a blast,” Kathryn said.

It’ll be well-earned time off. Patrick’s days typically start at 6 a.m. “I let the dogs out, feed them, play with them, scoop poop, rinse and repeat,” he said.

Kathryn is still working as program coordinator of Fire-Adapted Methow Valley. But they look forward to having more time to explore closer to home and to doing volunteer work.

“We were just talking the other day about what made this so special,” Kathryn said. “It was getting to know so many people and dogs. We have so many favorite dogs.”

Rover’s Ranch closes on July 5. The Heims said they’d be happy to answer questions or mentor anyone who might be interested in opening a kennel in the valley.