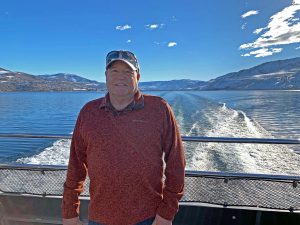 Ken was born April 7, 1959, in Oak Harbor, Washington, to Mary Ann and Clarence Elliott Layfield, preceded in death by his mother, father, sister Anita, daughter Chelsea, and nephew Allen. He peacefully passed away at the age of 62, surrounded by his loved ones, on March 16, 2022, in Spokane, Washington.

Ken was a loyal and loving man. He was always willing to help anyone and everyone and was a problem-solver at heart. He never let anything hinder him. Ken was just a phone call away and always had an answer. He was a loving father, devoted grandfather, amazing uncle, generous friend, and a dedicated worker.

His childhood was mostly spent in the Virgin Islands, where the culture and scenery of the tropics were a huge influence on his life. He loved sailing, diving for lobster and conch, fishing, and had a great love for the ocean. Later in his childhood, he loved trips to Georgia where he would visit his family and spend months there at a time.

He eventually landed in Anacortes, where he graduated from high school, made many lifelong friendships, including his former spouse and mother of his children, Jenne Lofgren. Throughout his life, he enjoyed all sports, but especially loved coaching football for the next generation of kids, including incredibly successful winning seasons.

Ken’s love of fishing grew even more when his two sons started going up to Alaska to fish with him. He took much pride and joy in teaching Elliott, Caleb, and Jillian the ins and outs of fishing, combining his love of his children with his passion of fishing.

During his time off Ken enjoyed traveling, always finding himself near an ocean and sunshine. After Ken moved his family to Winthrop, Washington, in 1997, he began to take great pride in creating a homestead for his growing family and friends to gather. Ken spent many mornings having a cup of joe on his porch.

He is survived by his three children Elliott Layfield (Karter and their son Ridge); Jillian Stevie (Beau and their children Penny, Nellie, and Grant); and Caleb Layfield, (Hailey and their expected child), and by siblings Timothy (Chris), Kristina (Mike), Rebecca, and many nieces and nephews.

Leaving behind a legacy and a life full of love, our dad will be deeply missed and remain alive in our hearts forever. He truly touched everyone by his presence and left a lasting impression with

his huge heart and love of life. He had many memorable quotes, many of which cannot be printed here, so in the words of Ken himself, “it’s all good.”

A celebration of life will be announced at a later time.