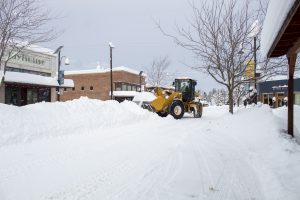 “January started off with e bang with snow accumulation of +/- 200% of normal, building the statewide pack to 133% of the long-term median,” Water Supply Specialist Scott Pattee wrote. “However, the second half of the month brought 0-50% of normal snow fall. The first 11 days of the month carried the weight of the entire month. February is not starting off any better.”

Statewide, snowpack was at 100% of normal as of Feb. 1, down 7% from Jan. 1. The January supply outlook reported that 107% statewide number jumped 14% after the heavy snowfall later that week.

As of the Feb. 1 report, the Methow River at Pateros was at 146% of average January streamflows, according to the report.

In the next few months, the Pacific Northwest is forecast to have below average temperatures and above average precipitation, according to the U.S. Drought Monitor.