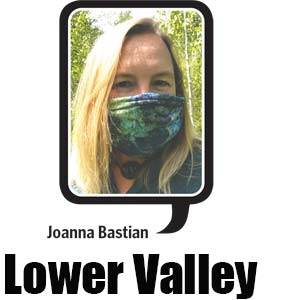 Isn’t it odd that we use just one common word for snow when there are so many different types of snowflakes, snowfall and snowpack?

Years ago, I read Peter Hoeg’s novel, “Smilla’s Sense of Snow.” The author spends entire passages describing snow in mesmerizing imagery interspersed with Greenlandic Inuit words. At one point, the main character speculates on the hundreds of words for snow in her native tongue, versus the singular term used by people who do not require an intimate knowledge of the intricacies of ice and snow.

The National Snow & Ice Data Center identifies 30 different terms to describe types of snow crystals, snowfall, snowpack and snow formations. Now that I know all the terminology for snow and ice, I doubt I will widen my lexicon. I am stuck on snow.

For example, a recent walk in the Golden Doe wildlife corridor turned surreal when fluffy egg-sized snow clumps — called polycrystals — fell thickly from the sky and melted upon landing. “Polycrystals” did not capture the experience. “Fluffy snowflakes” was more to the point.

Last week’s powder-laden storms delivered snowflakes of a crystalline structure that held more air than water. They landed on dark gloves and hats showing off perfectly formed stellar dendrites. I donned a pair of skis and pushed off down the driveway, only to stop short when the skis caught on dry rocky ground hidden beneath loosely piled snow. Lesson learned: Safe snow recreation requires a solid snowpack.

Did you know snow is classified as a mineral? According to the smart people at NSIDC, snow is a “naturally occurring homogeneous solid, inorganically formed, with a definite chemical composition and an ordered atomic arrangement.” Breaking down that mouthful, ice is naturally occurring when the temperature drops below freezing. It is a solid, made of one homogeneous material. And, snow and ice have a definite chemical composition in an ordered atomic arrangement: H2O.

In other words, snow is not a plant or an animal, so it must be a mineral. Leaving just one question … How would one classify a snowman?

All this fresh powder is perfect for snow cocktails. ICE, the Institute of Culinary Education, provides several snow-based recipes at www.ice.edu/blog/recipe-snow-based-cocktails.

A “Cold Toddy” starts with a tablespoon of honey dissolved in a tablespoon of hot water, stirred with a cinnamon stick. Add two fingers of chilled bourbon, a generous squeeze of lemon juice and a scoop of snow.

A Strawberry-Mint Snow Daiquiri is slightly more laborious, as it requires a blender. Drop five frozen strawberries, a few mint leaves, lime juice, rum and a dash of sugar in a blender. Puree until slushy. Pour the strawberry slush into a large glass, top with snow, and stir to combine. Garnish with a sprig of mint.

Tis the season for Whiteout Racing Kennel to hit the road. The race docket is packed with five events in three months totaling over 600 racing miles. The team plans to participate in the Pedigree Stage Stop, Race to the Sky, Midnight Run, WolfTrack Classic, and the 150-mile race, CopperDog. Follow along on the Whiteout Racing Kennel Facebook page, and view the excellent portraits Christina has posted of each dog. It’s a beautiful team, with plenty of spunk.