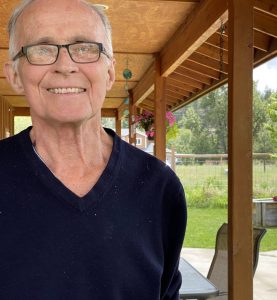 Rolf Julius Kolden passed away peacefully in Winthrop on Dec. 5, 2021, with his wife and daughter by his side.

Rolf was born in Black Duck, Minnesota, on Feb. 21, 1942, during a blinding snowstorm that caused him to be delivered by a midwife on the counter of his grandfather’s general store. He grew up in Bemidji, Minnesota, the son of Eunice and Osborne Kolden and brother of Marc Kolden. His early years were spent roaming the north woods, playing piano and collecting a bevy of Boy Scout badges. The early death of his father when Rolf was 4 years old left him with enduring empathy for others faced with loss and hard lives. He gained a wonderful stepfather and stepbrother when he was 10.

Rolf went to Oberlin College in Ohio as a history major, followed by a year as a Fulbright Scholar in Germany and a graduate degree at Harvard in political science. After some time as a house painter and taxi driver in Boston, he went back to Ohio and studied medicine at Case Western Reserve.

After a year at Boston City Hospital, he went to a rural clinic in North Carolina, where he met his wife, Peggy. They moved together to New Mexico where he worked for the Indian Health Service. His medical career transitioned from primary care to psychiatry when he realized how much time he spent talking with patients about their mental and emotional health, and he completed a psychiatry residency at the University of New Mexico.

Peggy and Rolf were married in 1980 in Albuquerque, and their daughter Nell was born in 1984. In 1987, they all moved to Seattle, where he worked at the VA in the drug and alcohol unit and also in private practice. His comfort in treating patients lost in the cracks of the system led him to work in the psychiatric unit of the Monroe Correctional Complex in Monroe Washington and later at the Community Psychiatric Clinic in Downtown Seattle. After retirement, Rolf and Peggy moved to the beautiful Methow Valley in the North Cascades of Washington state. Rolf sang in the Christmas Chorale and happily rode his bike and skied the trails in the winter.

Throughout his life, Rolf maintained a continuous love for the beauty of the world around him. He sang and played piano, wrote and told stories, and contributed witty and goofy humor on all occasions. He listened with a full heart and no hint of judgement, and never missed an opportunity to comment on a beautiful sunset. He loved so many people and made sure they knew it each day.

Rolf was proceeded in death by his father Osborne Kolden, his mother Eunice Grier, his brother Marc, his stepfather Jim Grier and his stepbrother Roger Grier. He is survived by his wife, Peggy Porter, his daughter Nell Scott (David), granddaughter Kaia, and many beloved cousins, nieces and nephews in Minnesota, Colorado and California.

Rolf lived the last four years of his life at Jamie’s Place, the wonderful adult family home in Winthrop. He was loved and cared for by an outstanding group of caregivers in a place that truly became his home. He was able to play the piano, snack in the kitchen, have frequent visitors, and come home often, allowing him to continue to be happy and relaxed as his Alzheimer’s disease progressed. If you are inclined to give in memory of Rolf, consider a donation to Jamie’s Place: P.O. Box 1260, Winthrop, WA 98862. To donate online, or learn more about Jamie’s Place, go to www.jamiesplace.org.

No memorial service is planned at this time. To share stories, memories, photos, and condolences, please visit https://rolfkolden.wixsite.com/memorial.