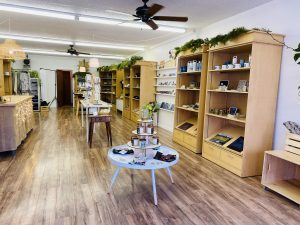 For artist and designer Baylie Peplow, the natural world has always been a source of beauty, solace and inspiration.

This passion for images found in nature influences not only who she is and what she does, but also what she creates. Nearly all the apparel, cards, prints, stickers, candles and accessories she designs feature a pattern, a silhouette or an icon from the natural world: a leaf, a mountain landscape, ripples in the river, a grizzly bear or a humpback whale.

Created under her Red Umbrella Design label, all of Peplow’s “down to earth treasures,” as she calls them, are now available at her new retail store on Riverside Avenue in Winthrop, next door to the Winthrop Gallery.

The shop Peplow leases from John and Carol Lester is bright and airy, with wide windows across the front. Shelves repurposed from basement storage display the functional and decorative artwork and apparel that Peplow designs in her Mtn. Annex studio.

The layout of the store echoes Peplow’s design aesthetic: clean, crisp lines, with engaging patterns and linear perspectives. There’s a kids’ toy section, gift wrapping, and down the road there may be a design-your-own-shirt station.

In addition to her original designs, Peplow sells the artwork of seven local and regional women through her Red Umbrella Artist Collective.

“I started the collective at the end of 2019,” Peplow said. “It’s intended to support creative types who don’t have the background or bandwidth to the business end of things, like production, marketing, and sales. They earn a commission from sales, and I handle the business end.” Peplow may open the collective up to more artists in the future.

Peplow, who has lived in the Methow Valley part-time or full-time for most of her life, graduated from University of Oregon in 2006 with a degree in architecture and a minor in fine arts. But after working for a while in architecture, she found herself more drawn to creating small-scale artwork than designing buildings. Peplow began quietly creating art when she moved to the Methow full-time after college, but “then [Little Star Montessori School founder] Rayma Hayes grabbed me,” she said, “and I taught pre-school and kindergarten at Little Star for five years.”

Peplow’s Little Star years were joyful, but eventually she “felt like my creative muscles were not being exercised enough,” she said. Peplow moved to Seattle, founded Red Umbrella Designs, and began focusing on making art. Initially she supported herself by working service industry jobs, but by 2014 she had established herself enough as an artist that she was able to dedicate herself full-time to artistic pursuits. By the time she and her husband, JB Huyett, moved back to the Methow in 2018, Peplow had a design studio, a retail shop in Ballard, and several employees.

The Red Umbrella Design store is one more step in Peplow’s professional journey, a journey that is increasingly rewarding. After experiencing post-partum depression after the birth of her son, Arlo, in December 2019, Peplow is finding her footing. Of course, COVID-19 striking when she had a newborn quite likely contributed to her emotional state, as did working out of her basement. In March 2021 she began designing out of the Mtn. Annex office suites in Winthrop. “It was a relief to work with natural light and other people,” she said.

Peplow has kept up her collaborative work with others, including employees at her Ballard store. She also works with high school interns, providing a structure for young people to understand design and production.

“I’d like to grow this program,” she said. “I love offering support to the next generation of creatives.”

Peplow recently turned 40 and said that opening the store is coming at a perfect time for her, personally and professionally. “It’s such a good project for me,” she said. “It’s really something to sink creative energy into.”

The Red Umbrella Design retail store is open 10 a.m.-5 p.m. Monday through Friday, and 10 a.m.-6 p.m. on weekends. After the holidays, Peplow will revert to being open five days a week. For more information, visit www.redumbrelladesign.com.