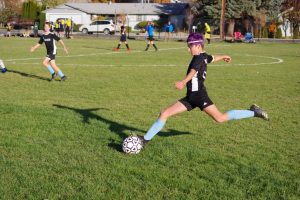 With two wins in a rare soccer double-header on Nov. 6 in Ellensburg, the Methow Valley’s U-16 Boys soccer team wrapped up a winning season with a final record of six wins against three losses and a draw.

The boys swept the two-game set from Kittitas Valley Pumas by scores of 4-0 and 2-1, placing them third in the final standings of the WPL Boys High School League, a premier league for boys in the seventh, eighth and ninth grades, against teams from Walla Walla, Moses Lake, Tri Cities, Pasco and Ellensburg. They hit the turf this fall after missing last season during the pandemic outbreak. Walla Walla United won the league season title with a record of 9-1-0, and Basin Sounders (Moses Lake) were second at 7-2-0.

“Our team play was characterized by a give-nothing-up defense that could usually track down the opponent’s fastest players, take away the ball, and deny any decent goal scoring chances,” said coach Kaufman. “Raiff Reichert had a great season [in goal], especially after the team shook off early losses and figured out its defensive formation.”

Kaufman described the offense as an attacking style with long, through-the-defense passing, coming from either the center fielder or up the sidelines, taking advantage of whatever openings an opponent’s defense presented. “FC Methow would move the ball forward through attacking center midfielder or up the wings to forwards. Our passing game and our longer through-ball passes led to many scoring opportunities,” he said.

Many of the young athletes in the league will eventually be playing for schools of a larger classification than the Methow Valley team, which serves as a great training ground for these future Mountain Lions. Indeed, several of the local players have already had some high school experience, playing for Liberty Bell during last spring’s truncated and adjusted 2021 season as eighth-graders.

“The team is looking forward to strengthening the high school program,” said Kaufman, “and has served as a development team over the past few years. We’re made up of seventh-, eighth-, and ninth-graders who love soccer and have enjoyed playing competitive soccer in central Washington.”