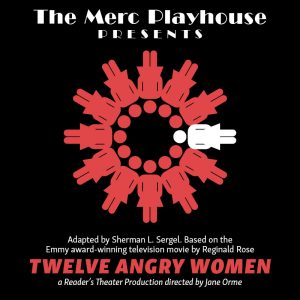 The Merc Playhouse Reader’s Theater production of “Twelve Angry Women,” a play adapted by Sherman L. Sergel from the Emmy award-winning television movie by Reginald Rose, will open on Thursday (Nov. 18) and continue through Sunday (Nov. 21).

Led by Merc board member and veteran director Jane Orme, “Twelve Angry Women” is a provocative Reader’s Theater about a jury deliberating over the trial over a 19-year-old boy who was accused of stabbing his father. “The jurors’ final verdict and how they reach it add up to a fine, mature piece of dramatic literature that will provide food for thought and rich discussion following the show,” Orme said in a post about the play.

The 14 parts will all be played by Methow Valley women, many of whom are either Merc board members or staff. Audiences will see familiar faces on stage — Carolanne Steinebach, Emily Doran, Missi Smith, Meloday Langan — as well as some who typically take backstage supporting roles, like Darla Hussey.

Orme said she selected the play for its relevance. “This play has been in the public domain since 1957; it started as ‘Twelve Angry Men,’” Orme said. “You go from 1957 to the present day, and we’re still talking about the same stuff. One of the jurors is a racist and judges the defendant swiftly without hearing the evidence. It’s like nothing has changed, and that’s really sad.”

“The other element of this play is the concept of truth, and listening to factual evidence,” Orme said. “We’re in this situation right now where people don’t even care about the truth anymore. They just believe what they want to believe. That’s a big part of the plot and the story in this play as well.”

Orme says that during the play audiences will see jurors who jump to conclusions based on ingrained biases, while others listen, look at facts, and arrive at conclusions different than what they might have originally expected.

The show, which will be performed in three contiguous acts, moves quickly, Orme said. “It doesn’t need an intermission — the audience will feel like it is right in the jury room the whole time.” Afterwards, Orme and others will facilitate a discussion about the performance.

Show times are 7 p.m. on Thursday, Friday and Saturday, and 2 p.m. on Sunday. Admission is by donation, with a minimum fee of $1 for online reservations. All reservations must be made in advance either online or by calling 997-7529. Doors open 30 minutes before show time. Masks will be required of all audience members and proof of vaccination will be required for ages 12 and older. For more information, visit www.mercplayhouse.org.