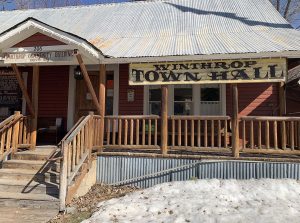 The same stalemate continues to hold up completion of the planned RiverWalk project in Winthrop, the Town Council was told at its meeting last week.

During the council comments portion of the meeting, council member Bill McAdow asked about progress on the plan to extend a pedestrian walkway following the banks of the Chewuch and Methow rivers, from the bridge to North Village downstream to the Spring Creek Bridge, including an underpass below the Chewuch River Bridge at the four-way stop. Much of it would be on the back side of commercial buildings that front on Riverside Avenue.

For years, an ongoing issue has been dealing with concerns raised by the owners of Riverside Avenue property whose parcels would be crossed by the path. Those concerns range from whether the backs of their buildings would have to meet the town’s Westernization requirements, to loss of parking to ongoing maintenance to questioning the need.

In 2020, the town developed a “letter of intent for RiverWalk easement” and began working in concert with Methow Trails to obtain easements for the trail. By agreeing to terms of the letter, property owners will allow the town to have access for surveying and planning the trail’s route.

Preliminary design has been funded by a state Recreation and Conservation Office (RCO) grant plus federal transportation monies. The town needs easements to put the project out for bid, and may have to repay some of the grant money if Phase I isn’t completed in a timely fashion.

McAdow asked, regarding the grants, “what are we on the hook for if we can’t make it happen?”

Ranzau said that RCO has extended the RiverWalk funding and “we have good rapport with RCO … but it’s not open-ended, necessarily.”

“The easements are the only things holding us up,” Ranzau said. “There’s only so much we can do at Town Hall.” She encouraged the projects supporters, including council members, to continue communicating with property owners about the trail’s potential benefits.

McAdow said he is frustrated by the lack of progress. Council member Ben Nelson emphasized the potential advantages for businesses along the proposed trail.

“The businesses need to get this done,” Ranzau said, adding that “I really think we have to rush to get it done.”

In other business, the council agreed to make the town-owned Winthrop Barn available for free to host COVID vaccination clinics. Ranzau said that Family Health Centers plans to offer vaccinations at some point in November.