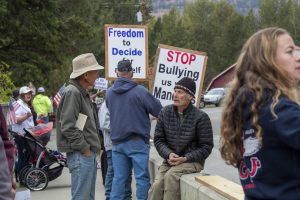 Two demonstrations took place in Twisp and Winthrop in the past week to protest vaccination mandates with a mixed batch of participants advocating for personal autonomy and citing debunked myths about COVID-19 vaccine side effects.

About a dozen people gathered Friday (Sept. 17) at the Chewuch River Bridge in Winthrop to protest vaccine mandates.

“It’s about mandates. It’s about losing jobs,” said Kim Frey, of Twisp, who identified herself as an organizer of the Winthrop event and said the attendees wanted to make a “peaceful statement.”

“I care about my community,” she said.

A day later, a crowd of about three dozen gathered in Twisp along Highway 20. Protesters at both events had a variety of concerns — some, like Frey, said they believe the vaccine mandates violate their personal freedom.

“When people say, ‘My body, my rights,’ it really should apply across the board,” Frey said.

She declined to say whether she had gotten other vaccinations.

A speaker on Saturday who identified herself as a teacher recounted what she said were serious side-effects from the COVID vaccines, including a woman who had “developed problems with her uterus” after being vaccinated.

One demonstrator carried a sign saying “Immune system by design” that warned not to mess with the system created by God. Other signs called for an end to tyranny.

Some carried banners for Waking Up Washington, a group dedicated to small government and self-reliance based in southwest Washington. The group had urged people to gather on Saturday to oppose vaccine mandates.

The rally, held when there was lots of activity from the Twisp farmers market, drew honks from motorists and some jeers from some passersby.

President Joe Biden has also issued several federal vaccination requirements. For example, he has issued orders requiring COVID-19 vaccinations for businesses with more than 100 employees, for all federal workers and government contractors, and for healthcare workers.

In some of those categories, workers can remain unvaccinated with regular testing, or can get medical or religious exemptions. The federal order goes into effect Nov. 22.

Last month, Julie Wehmeyer, MN, RN and employee health and infection control manager for Family Health Centers, said the Twisp Family Health Centers clinic had all its staff and providers vaccinated already. Other FHC clinics are still working toward compliance with the mandate.

“Family Health Centers have received some requests for religious or medical exemptions, and they are handled on a case-by-case basis,” she said. “All staff members were provided with information in advance regarding requirements according to the mandate, and the appropriate forms to complete to request an exemption.”

The clinic is working with individual staff members to give them information about the vaccine and the mandate.

“We want to make sure all of our employees feel free to express their concerns and are working with each one individually,” Wehmeyer said.

“We have had a few more employees get vaccinated, but we have also received a large number of religious accommodation requests which we are still working through,” he said. “I think we will ultimately lose some employees who chose not to comply with the mandate but we are trying to be as reasonable as possible.”

On Aug. 23, the U.S. Food and Drug Administration (FDA) gave full approval to the Pfizer-BioNTech vaccine for patients 16 and older. The Moderna and Johnson & Johnson COVID-19 vaccines are still available under the FDA’s emergency use authorization (EUA.)

“The vaccine has been known as Pfizer-BioNTech COVID-19 Vaccine, and will now be marketed as Comirnaty (koe-mir’-na-tee), for the prevention of COVID-19 disease in individuals 16 years of age or older,” according to a news release from the FDA.

The vaccine will remain available under EUA for teens age 12 to 15.

News organizations including the Washington Post, Los Angeles Times, Reuters and USA Today have labeled that idea a conspiracy theory propagated by people including former Trump advisor Steve Bannon and Robert F. Kennedy, Jr., an anti-vaccination activist who also once supported the disproven notion that vaccines cause autism.

“It is completely false,” said Richard Morales, director of marketing and public relations at Mid-Valley Hospital. “The vaccine itself is the same. The only difference, or changes made, is the label/name.”

Mid-Valley hasn’t yet received a shipment of the vaccine with the new label, but the drug in the vials is the same, he said.

“As far as the issue with changing the name, to be honest, it’s my understanding that that is not uncommon, especially when a pharmaceutical company’s primary name is included in the original name of the medication,” Wehmeyer said.  “While I recognize the differences of opinions about the vaccine, and possible treatments, the sheer numbers of people in the country that have received the vaccine are helping us slow the spread, along with the severity of the disease.”

The FDA has commented on the theory that Comirnaty is a different vaccine, saying the approved vaccine has the “same formulation” and is “interchangeable” with the vaccine given under the EUA.

That isn’t the only conspiracy theory present in this community. At an Okanogan County commissioners’ meeting last week, following a discussion about how some county departments are struggling because so many staff members are out sick with COVID, Commissioner Jim DeTro said, “Well, now they’re saying that the vaccine’s carrying the Delta variant.” He said he’d been watching something over the weekend but didn’t provide specifics.

Vaccines do not carry any live virus and there is no risk of developing COVID from a vaccine, according to Okanogan County Public Health.

Public health organizations have had to address a number of other widespread myths about the COVID-19 vaccine. According to the CDC and Washington state Department of Health, the vaccine does not contain microchips, will not make you magnetic, make you sterile or infertile or alter your DNA. In fact, the vaccine is strongly recommended to pregnant women.

Frey and other attendees Friday also cited data on the Vaccine Adverse Event Reporting System (VAERS), which takes reports from doctors, individuals and other sources on possible adverse reactions to vaccines, or associated with vaccines. The reports are then tabulated and investigated and spreadsheets of those reports are available online.

The CDC states that reports of adverse effects to VAERS are only reports, and not a legal or medical determination that the vaccine in fact caused a death — but that a person received a vaccine at some point before they died.

“Recently, the number of deaths reported to VAERS following COVID-19 vaccination has been misinterpreted and misreported as if this number means deaths that were proven to be caused by vaccination. Reports of adverse events to VAERS following vaccination, including deaths, do not necessarily mean that a vaccine caused a health problem,” the CDC states.

COVID-19 Vaccines are associated with some severe but rare side effects, including a rare blood clot condition associated with the Johnson & Johnson vaccine and myocarditis or pericarditis after Moderna or Pfizer vaccines. Most-common side effects include sore arms and fatigue.

As of this week, Pfizer is applying for an EUA to administer its vaccine to children from 5 to 12 years old. Right now, the Pfizer-BioNTech vaccine is available to children as young as 12 through an EUA.

Last week, an FDA panel voted to approve a third shot of the Pfizer vaccine six months after the second dose for patients 65 and older, for people at risk of severe illness and for people whose jobs put them at high risk. The panel didn’t address doses for the Moderna and Johnson & Johnson vaccines.

Locally, vaccines are available through a number of organizations. The weekly vaccine clinic at the Okanogan County Fairgrounds has been reopened, and takes place from 8 a.m. to 10 a.m. Friday mornings in partnership between Okanogan County Public Health, Okanogan County Emergency Medical Service and Lifeline.

For more information on getting a vaccine go to okanogancountycovid19.org/covid-19-vaccine/.

More on the “Cominarty” brand name 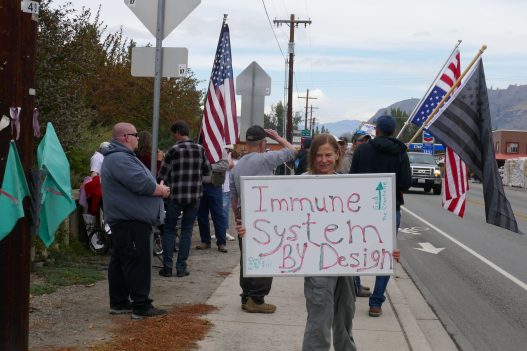 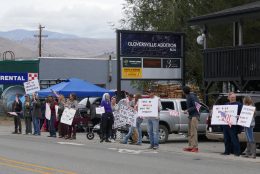 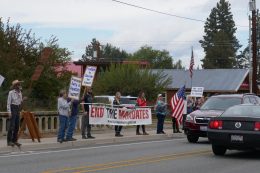 Photos by Marcy Stamper An anti-vaccine protest on Saturday took place in Twisp.