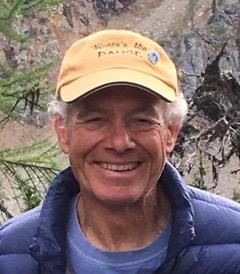 Mike Real died at home August 29, 2021.  Mike lived full-out every day, even after his diagnosis of multiple myeloma.

Mike was predeceased by his wife Dee Real.  His sister Suzanne Real resides in Boulder, Colorado.

He was born August 2, 1948, in Newark, New Jersey.  His mother taught him to read the instruction manual and repair everything.  Her lessons stuck and served him well in all his endeavors.

As a kid he wanted more than anything to have a car and to learn to fly. He read every book on cars and airplanes in his local library. Aviation books introduced him to history, which became a life-long study.

Mike graduated from the University of Arizona with a degree in history. Finding it had no employment opportunities, he enlisted in the Air Force to fly. After the service he flew for a small airline and a glider service in the Caribbean, the Air National Guard in the Sierras, and Horizon Airlines, before he started as a commercial pilot with Northwest Airlines.

He loved smaller and older planes that were not “automated” like the modern commercial planes.  He owned his 1959 Piper Comanche for many years. The plane afforded him the opportunity to explore the West from Arizona to Alaska. Any day he could share the opportunity to see the mountains from the air with others was a great day.  If he could save a little gas by flying the air currents he was a happy man.

Mike was based out of Portland for Northwest. As a long-time member of the Portland Wheelmen he made many lifelong friends and met Dee Real. Mike and Dee enjoyed 20 plus years of biking long, challenging routes and touring the United States, Canada and Europe by bicycle. They organized bike tours in the United States and Europe. They also worked the Seattle to Portland tour when not riding the STP in one day.

Dee was known as a fabulous cook and they were great entertainers — Dee providing the food and theme, Mike enjoying the people as always.

They fell in love with the Methow, like so many, after visiting to ski and mountain bike the Methow trails. They built their retirement home here. Mike organized GASP, the Geezers Actually Still Pedaling. GASP formed strong friendships and welcomed new participants. It was important to him that all were welcome.

Mike was famous for his energy and enthusiasm. He served on the boards of the music festival, Methow Trails and for the Twisp Airport. He could be counted on to build trails and bridges or serve pancakes at the Fly-In.  His mother’s training to repair served to help others at Methow Recycling’s Repair Cafe and for any of his friends and at any time.  Every day of his life was filled with both fun and work.

After Dee’s death in November 2014, Mike and I got together thanks to helpful friends. We enjoyed almost five years as partners and married on August 3, 2021, much to the surprise of those same friends.  During our time together I relearned to ride a bike, acquired a cat, attempted to cook and tolerate classical music.  Mike learned to ride a mule, care for chickens, accept disorganization and tolerate Labrador retrievers. We danced. We traveled Norway, France and Spain on horseback and bicycles and flew the west in his plane. We shared our excellent friends. It was grand and too too short.

Mike leaves behind many dear friends and acquaintances here and in the Portland area. Delta COVID now prevents an open gathering of all those who would wish to be together to celebrate his life. Only a small private memorial will be held —  my apologies. I am most grateful for the kind sentiments shared with me. I will always appreciate a Mike Real story.