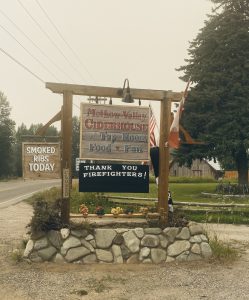 Weeks like these, it’s particularly hard to know what to write about in my column. The first week of smoke and fire, everyone is chatty, out and about, comparing notes, sharing stories, commiserating. But as we hunker down into fire season for the long haul (and for what seems to be, inconvenient truth though it may be, the longer and longer haul), there’s not a lot of column fodder going on.

“Write about smoke,” a friend suggested. Since there is plenty of that going on, I figure it’s as relevant a topic as any.

Twice on Sunday (which is when I write my column), I found myself under the smoke line. By “the smoke line” I mean the area where clear air and smoky air meet. This may not be an official term, but if it’s not, it should be. You’d think that transition from smoky to clear would be a continuum, but it’s far more distinct than that, more like the way it looks when two streams of different water qualities meet at a confluence. Until they blend further downstream, you see silty water and clear water side by side, two individual fields moving in unison.

Thus it was for me when I noticed smoke lines twice yesterday. One moment I was smack in the middle of what my brother optimistically calls “a cozy blanket of smoke,” the next I looked up to bluebird skies, that foul-fair line right above me.

Instantly, Joni Mitchell’s “Both Sides Now” popped into my head, launching what is, so far, a multi-day ear worm. I was grimy from yard work and parched from the heat and the N95 mask I had been wearing outdoors, but, by gum, I was going to look at smoke from both sides now.

Smoke gets a bum rap sometimes, like right now. When I wake up each morning unable to see my neighbor’s house across the field through the gloom, I’m not particularly charitable to the miasma of airborne grit. But the Methow Valley Ciderhouse’s sassy and unapologetic Sunday dinner special — “smoked ribs”— reminded me that there are plenty of reasons to love smoke.

What are they, you ask? Smoked ribs, for starters. Then there are smoked oysters, smoked Gouda, and smoked salmon. When you trounce another team or player in athletic competition, you smoke them. Beyoncé rocks the smoky eye look.

See? Right there that’s three good reasons to love smoke: food, sports and Beyoncé. But that’s about the limit of the bright side of smoke, at least from my perspective — a vantage point that includes a disturbingly active fire charging its way along Virginia Ridge as I write.

It’s a heartbreaking process, watching — and smelling — our valley, our county, go up in flames. But the fire, the smoke — they’re the reality of life here, the dark side of a place that in so many other ways offers not just a breath of fresh air, but an abundance of it.