Evacuation levels were reduced today for areas affected by the Cub Creek Fire. 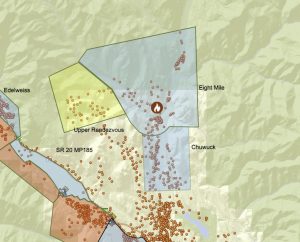 The evacuation level map is available at https://tinyurl.com/yj4awymm.

An area previously given a level 3 evacuation order is now a level two, an area that was labeled on the map as “upper Rendezvous, which was at the level 2 advisory is now at a level 1, and an area labeled “Chewuch” on the map will remain at a level 2.

All evacuation levels ordered for the Cedar Creek Fire remain at their previous levels.

The National Weather Service has issued an excessive heat warning through Saturday for much of Eastern Washington, including Okanogan County and the Methow Valley.

Temperatures are expected to reach into the triple digits Friday and Saturday afternoons.

The National Weather Service this morning is predicting a chance of rain from Saturday night, at 20%, through Monday. The highest chance of rain is on Sunday, at 40%. 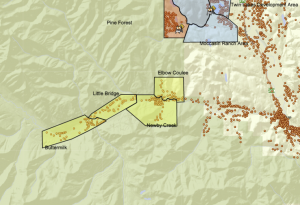 As the Cedar Creek Fire persistently continues its path southeast past Wolf Creek toward Thompson Ridge and the Twisp River drainage, Okanogan County Emergency Management Director Maurice Goodall announced Wednesday night that effective the following morning, Thursday, July 29, a level 1 evacuation advisory would be implemented for a portion of the Twisp River drainage.

The level 1 advisory, which encourages residents not to immediately evacuate, but to be ready in case further evacuations are ordered, is expected to include the area of the Twisp River drainage starting at Elbow Coulee headed west.

Goodall gave his update on evacuations during a community fire meeting in Twisp. The previous night, a similar meeting was held in Winthrop.

“We should all be on a level 1 right now,” he said. “We need to be ready. What we’re asking is really have a solid plan, think about it and act on it early.”

The most recent level 3 evacuation order was issued for the Pine Forest development. Part of the reason for the order was to have people have a chance to get out of the community during the daylight.

“That’s a bunch of spaghetti roads out there,” Goodall said. “It’s very hard to navigate … especially in the dark.”

According to the state Department of Natural Resources, more than 1,000 wildfires had been reported so far this year as of Thursday, which is an all time record and is almost double the 10-year average.

“The wildfire crisis impacts everyone—rural and urban communities on both sides of the Cascades,” said Commissioner of Public Lands Hilary Franz, the elected official who oversees DNR. “From air quality to the long-term health of our forests, wildfire is a public health and public safety issue in Washington and across the entire Western United States that we all must work together to confront.”

As of Thursday morning, the Cedar Creek fire was estimated at 36,922 acres with 10% containment. The previous night, the fire was active in the Silver Star Creek area and firefighters planned Thursday to use aircraft to slow the fire in that area. Firefighters were also planning to use backfires to slow the fire’s progression toward the road along the Highway 20 corridor.

“Today, fire crews are working in the Little Wolf Creek area and will evaluate the dozer line that was being constructed to tie into Thompson Ridge,” the Cedar Creek Thursday morning briefing states. “Observations from aircraft indicate that the line may still be viable as a control feature. Firefighters are also surveying existing roads and old dozer lines that were constructed during the 2014 Little Bridge Creek fire to provide additional control options.”

Great Basin Incident commander Evans Kuo spoke to area residents at Wednesday night’s community meeting in Twisp on his group’s second shift on the fire after taking over for Northwest Incident Management Team 8.

Kuo reported that the fire’s boundaries along Highway 20 and Methow River were looking to be “in pretty good shape” by the weekend if everything goes according to plan, allowing the group to move resources to the more active southeast portion of the fire.

The previous night, the fire continued to move across Wolf Creek toward Thompson Ridge. Kuo said his team is assessing the likelihood of the fire progressing to Little Bridge Creek.

Little Bridge Creek would be familiar territory for the Great Basin team, which was in the same area during the 2014 Carlton Complex fires. Kuo was one of the team’s staff in the Methow during that fire.

“For a lot of us there’s a little bit of flashback going on as we find some of those dozer lines that were put into place back then,” he said.

On the southeast end of the fire, crews are working to find a “control feature” to keep the fire from continuing its trajectory toward Twisp.

As of Thursday morning, the Cub Creek Fire was estimated at 52,832 acres with 18 percent containment.

The previous night, crews dumped more than 6,000 gallons of water from Deer Creek to Sweet Grass Butte and reported it was a successful operation.

“With a significant warming trend beginning today, the priority for crews is to reduce any heat and fuels, especially near Ramsey Creek and up into Tripod Creek where burning in the lower drainages remains a challenge for crews on the ground; these lower drainages are in steep and inaccessible terrain,” according to California Interagency Incident Management Team 1’s morning report. “With minimal winds throughout the day, the smoke will remain over the valley and linger over the fire.

Bill Steers, of the California team, said on at the Wednesday meeting that the southern portion of the fire on West Chewuch Road and up to 8 Mile Ranch were looking “secure.”

“All this area, we’re just tactically patrolling all that area as we cleaned it up and mopped it up all through there,” he said.

As of Wednesday, the fire had burned around cabins at Brevicomis Creek, but crews were mopping up the fire in that area as well, Steers said.

No structures have been lost in the Cub Creek Fire since the fire started July 16.

On Wednesday, fire crews reported the Payson Helitack crew had “wrapped” the Twentymile fire lookout — literally wrapping it in a metallic material to protect it from fire.

On Friday (July 30), the management was scheduled to transition to another Type 1 incident management team from Southwest Area Incident Management Team 2.

More information about the fires is available at: