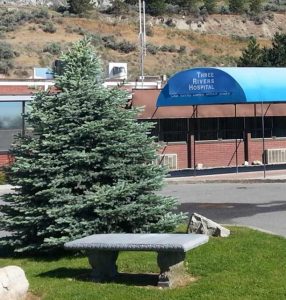 Three Rivers Hospital in Brewster is seeking to renew a one-year excess tax levy at the same level approved by voters last year. The levy proposition is on the Aug. 3 primary ballot.

The current excess tax levy, which passed with a combined 71% in Okanogan and Douglas counties in 2020, has been used to help offset the cost of maintaining emergency services 24 hours a day, every day.

The approved rate was 33 cents per $1,000 of assessed property value, and the hospital is not asking for an increase, said Scott Graham, chief executive officer.

“We are requesting that it be extended for another year at the same rate,” he said. “This revenue has been tremendously helpful to our hospital during the pandemic. It has helped us continue providing this critical service to our district during a time that has been economically uncertain for a lot of rural hospitals like ours.”

If approved, the estimated annual tax for a home valued at $200,000 would be $66 per year. Among other operational costs, the revenue is used to pay for round-the-clock staffing with board-certified physicians through a contract with ERx Group LLC.

“This has been a successful arrangement for about seven years, and we have expanded their contract recently to include inpatient coverage, as well,” Graham said. “This provides a more stable consistency of care for our patients, from the time they’re seen in the ER to their stay in Acute Care.”

“Our district’s support during these extremely trying and unprecedented times has been overwhelming,” said Leslie McNamara, secretary of the Three Rivers Hospital board of commissioners. “Thank you. I love our community and the opportunities we have to offer valuable and reliable health care.”

With the extra funds from that levy increase, the hospital was able to replace patient beds and furniture, move the Three Rivers Family Medicine clinic next door into the former Hillcrest House assisted living facility, and move the emergency department to the newest section of the hospital.

Property taxes paid to the hospital currently comprise about 5% of its total annual income, according to hospital officials.

Three Rivers Hospital is a public, nonprofit hospital that serves the largest geographic hospital district in Washington — an area of 2,500 square miles that includes the Methow Valley. About 15,000 people live in the district.

Questions regarding the Three Rivers Hospital levy proposition can be directed to media@trhospital.net, or by calling (509) 645-3347.