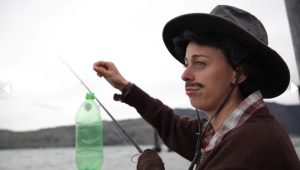 A girl fishing on a pristine lake with her grandfather reels in an impressive “14-incher” and dejectedly tosses the plastic bottle into a cooler already brimming with a dozen other discarded bottles.

Flowers squeal in terror as a hiker tramples and picks them and poses for selfies.

A haughty woman tries to reassure the hotel desk clerk as she checks in as her “fur-tipped walking cane” eagerly wags its tail.

These are just some of the comedic lessons in a series of seven videos written by — and starring, in every role — Methow Valley resident Jamie Petitto, to promote responsible recreation for the Cascade Loop Association.

The loop is a designated national scenic byway that passes through the Methow Valley on a route that takes in Seattle, Stevens Pass, the North Cascades Highway, Wenatchee and Lake Chelan.

Before Petitto moved to the Methow six years ago, she was pursuing a career in comedy and improv in the Los Angeles area, where she also hosted a popular YouTube show. She still turns to comedy for fun and to cope with pressures. “When COVID hit, I was so bored. Things were so serious all the time,” Petitto said. “I deal with stress by laughing at it.”

To amuse herself while stuck at home, Petitto wrote and performed in short, humorous videos, which she posted on her personal YouTube page. One shows her delightedly making snow angels in the magic of the first snowstorm and then, as the winter drags on, trudging glumly through a tunnel of deep snow. Another features a therapeutic conversation with her cat, which listens with compassion as Petitto pours out her soul.

Petitto is marketing director for the Twisp Chamber of Commerce, where she works regularly with the Cascade Loop Association. As the state started opening up as COVID restrictions eased, the association was reworking its tourism-promotion message, said Annette Pitts, who was executive director at the Cascade Loop through May, when she left to take another position.

“We’ve all really experienced pain points, and realized this was not going to get better as we opened up,” Pitts said. Towns like Leavenworth and Winthrop recalled the flood of visitors last year even when travel was supposed to be limited to essential trips. Trails were overloaded and communities overtaxed. There was litter everywhere, Pitts said.

The association decided on a campaign that would encourage responsible recreation while still luring people to visit the area, Pitts said. She happened to see Petitto’s videos on YouTube and knew her comedic touch would be the perfect way to convey that message.

Pitts had worked before with both Petitto and Cashmere-based Voortex Productions, which produced the videos. “I knew they’re both geniuses at storytelling through video,” Pitts said.

The group held a big meeting over Zoom to brainstorm ideas. They came up with a list of themes but left the concepts and creative approach to Petitto and Voortex, Pitts said.

Topics include excess litter and human waste in natural areas, trailhead congestion and unsafe parking, protocol for pets, hazardous hiking and water practices, and planning trips during the week to avoid crowds.

Petitto wrote two dozen scripts, which they narrowed down to seven to fit their budget. She wears a collection of wigs and moustaches to play all the roles. The production crew spent two days in Leavenworth and two in Wenatchee making the videos, which was “super-fun,” Petitto said.

The association wanted the videos to reach people who may not have done much outdoor recreation before the pandemic, Pitts said. The videos teach about the impacts of tourism on the people, the land and the economic health of the communities they’re visiting.

That may seem at odds with the mission of an organization that exists to promote the area. “But if it’s a hot mess when you get there, you won’t want to come back,” Pitts said.

Standard public-service announcements about responsible recreation and safety protocols during the pandemic were already flooding the airwaves and social media, Pitts said. They wanted an approach that would cut through the noise.

The association received a $10,000 grant for the videos from the Chelan Douglas Regional Port Authority to encourage sustainable tourism and educate travelers, said Ron Cridlebaugh, director of economic and business development for the port authority.

The port authority is forward-thinking in taking a regional approach and understanding the connection between tourism and economic development, Pitts said.

Petitto had accepted that moving far away from Los Angeles could mean the end to her career as a comedic actor. “I’m just pinching myself that I can make comedy videos here,” she said.

The Cascade Loop is sharing the videos through its website and on social media. They can be seen at www.cascadeloop.com.