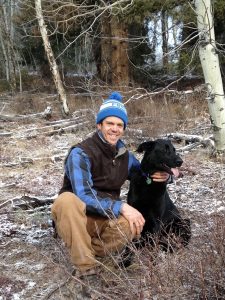 “It’s like having gasoline out there,” said Brian Steinhardt, forest fire zone manager for Prescott and Coconino national forests in Arizona, in a recent AP story about the increasingly fire-prone West.

Now something else is happening — and at the worst possible time.

Federal firefighters are leaving the work force and taking their training and experience with them. The inability of federal agencies to offer competitive pay and benefits is creating hundreds of wildland firefighting vacancies.

Vacancies, of course, limit how much federal firefighters can do. If Western communities want to be protected, they need to ensure that their firefighters receive better pay and benefits.

In my 11 years of work as a wildland firefighter, I’ve managed aircraft, trained people and run fires myself, but I also did outreach and recruitment for the U.S. Forest Service and Bureau of Land Management. I know how hard it is for hiring managers to make 2,000 hours of grueling work, crammed into six exhausting months, sound appealing when the pay is $13.45/hour. The pay doesn’t come close to matching the true demands or everyday dangers of the job.

Federal wildland firefighters, by necessity, are transient workers. During the fire season — now nearly year-round — they must be available to travel anywhere in the United States at any time. And to advance in their career, they have to move to other federal duty stations to gain more qualifications.

Finding affordable housing has always been a problem for career firefighters on a federal salary. To make matters worse, federal agencies revoked the “Transfer of Station” stipend for career employees, which helped offset the cost of moving. Just recently, a national forest supervisor also revoked a “boot stipend.” It might sound minor, but it isn’t: When you’re in the firefighting business, boots tough enough to save your life can easily cost you $500.

Some states aren’t relying on the government to act quickly. “We aren’t just waiting for the next crisis to hit,” said California Gov. Gavin Newsom, in establishing an $80.74 million Emergency Fund that delivers an additional 1,256 seasonal firefighters to boost CALFIRE’s ranks. This Emergency Fund is in addition to the governor’s $1 billion budget request for California’s Wildfire and Forest Resilience Action Plan.

In Washington, state legislators unanimously passed a $125 million package that will enable the state’s Department of Natural Resources to hire 100 more firefighters. The legislation furthers the state’s efforts to restore forest health and creates a $25 million fund to ensure community preparedness around the state.

The bill’s sponsor, Rep. Casey Snider, was amazed to learn that frontline wildland firefighters make more money at McDonald’s: “These positions are critical,” he said. “They are the first ones on fires.” This year, Utah has already had five times the number of wildfires it normally experiences in a year.

And firefighters are organizing and speaking up. The Grassroots Wildland Firefighters group is working to halt the exodus of firefighters from federal agencies by advocating for pay parity with state and local fire protection agencies. The group also supports initiatives to assist the physical and mental health of firefighters and their families. The statistics they highlight are shocking: Wildland firefighters have a suicide rate 30 times higher than the average. They also experience high incidences of cardiovascular disease and lung cancer.

There is talk on the federal level of creating a permanent, year-round firefighting work force. I think this is a necessary step, but it won’t fix the work force capacity issue unless increased pay and benefits are used to encourage the recruitment and retention of federal firefighters.

We all know that today’s wildfires are longer, more damaging and more frequent than ever before. We also know that men and women are putting their lives on the line for less than they’d earn at a McDonald’s.

Our firefighters do all this to protect our lives, our forests and our communities. We owe them at least a living wage and a chance for a healthy life. I hope more states and legislators will start paying attention. This is a debt that needs to be paid.

Jonathon Golden lives in Moab, Utah, and is a contributor to Writers on the Range, writersontherange.org, a nonprofit dedicated to spurring lively conversation about the West. He left firefighting in 2019 to found a consulting company that focuses on conservation and national security.