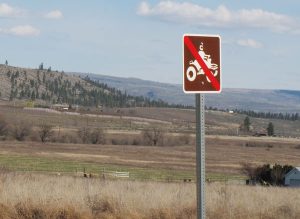 When the Colville National Forest issued new maps last year, Conservation Northwest and WildEarth Guardians filed a lawsuit challenging the expansion of motorized use without public input or consideration of fish, wildlife and sensitive habitats.

The reversal is reminiscent of the brief opening and closing of roads to ATVs in parts of the Okanogan-Wenatchee National Forest in 2014, shortly after Washington state passed a law creating a new category of wheeled ATVs, which have additional safety features and registration requirements to assist with enforcement.

Okanogan-Wenatchee officials initially said the 38-page state law — with complex criteria that resulted in different interpretations — didn’t alter WATV access on public lands. But on further review, then–forest supervisor Mike Balboni determined that since WATVs had to be licensed, they should be treated like any other vehicles. That meant WATVs could travel on forest roads open to other vehicles, he said.

In 2014, Conservation Northwest and the Methow Valley Citizens Council (MVCC) wrote a letter to Balboni saying that the forest had to evaluate road conditions and take public input before allowing ATVs to use the roads.

At the time, the forest said that its travel management plan — which was expected to be completed in 2015 — would include a list of roads and allowable uses that could end up changing the policy for off-road vehicles.

Even then, there was confusion about how the forest should interpret the state law. An assistant director in the Northwest Regional office said the state law didn’t apply to nonhighway roads (which would include U.S. Forest Service roads), meaning Balboni had erred in allowing WATVs to use them.

After two months, that view prevailed and Balboni closed those roads — most in the Methow Valley Ranger District — again. There are some off-road vehicle routes in the forest, but adding routes in and around the Methow is on hold, pending the completion of the travel management analysis and updated maps for the forest.

ATV access has been allowed — and blocked again — in other jurisdictions as well.

Shortly after the WATV law was passed in 2013, the Okanogan County commissioners opened roads up to 35 miles per hour throughout the county to WATVs. But they had to close them again after Conservation Northwest and MVCC filed a lawsuit arguing that an environmental review of individual roads- and of the potential for damage to fragile areas — was required first.

The county completed that review for roads in the northern and eastern parts of the county and opened hundreds of miles to WATVs.

Representatives from the Okanogan-Wenatchee briefed the commissioners on their plans to resume travel management, going by ranger district or county boundaries to streamline the process. Determining roads suitable for WATVs is the primary focus of the review, the Forest Service said.

The lack of options in and around the Methow Valley has been disappointing for ATV riders, who say the vehicles provide important access to lakes and mountains for people who can’t hike or who want to take a family outing. ATV groups have helped educate riders and monitor roads to be sure that ATV riders don’t travel off designated routes, but there have been instances of damage to sensitive areas, including in the Colville forest.