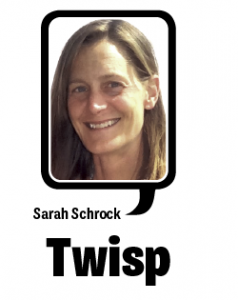 They say it takes a village, and perhaps no other time than graduation does the collective rearing of the valley’s youth feel more pronounced. After all, we’ve seen these kids rising up through the ranks over the years, whether it was on stage, on the field, or on horseback in the many Fourth of July parades.

One special graduate went unnoticed in the graduation parade and ceremony until she made a debut at a graduation party Saturday night. You see, this special young lady has truly been raised in the cooperative nature of the village mentality, literally cohabitating between two families for over 15 years.

Saturday night, Barbie, dressed in her cap and gown, showed up at the graduation party of the home of Liberty Bell High School graduate Cymone Van Marter to celebrate her commencement along with fellow graduates Lindsay Worrell, Lena Nelson and Liv Aspholm. While Barbie didn’t make the ceremony or the parade, she graduated between the hearts of her adoring “parents” and “sisters” Cymone and Amelia Bondi (11th grade). This is her story.

Barbie was found abandoned in a bin at a Kiwanis garage sale on Bainbridge Island about 15 years ago. Discarded by her previous parents along with her many sisters who were mostly missing arms and legs, she was lovingly adopted by then 3-year-old Cymone, who took them all home to raise. When Derek and Nicole relocated and moved into their new Methow Valley home in Hoot ’n’ Holler next door to Steve and Kim Bondi, Amelia (then 5) finally had a playmate next door, and Cymone had Barbies! Never mind that most of them were missing arms or legs: they were Barbies and Amelia was starstruck.

The Bondis did not encourage the ultra-feminine stereotype of Barbie and so Amelia was never allowed one of her own. During a dinner party one winter night, Cymone graciously gave Amelia her beloved four-limbed Barbie doll.

The next morning when Derek and Nicole woke up and walked outside, they found Barbie sitting naked in a snowbank. After Barbie was found abandoned in the snow, she found her way to the windshield of the Bondis’ car at Little Star Montessori School during a regular pick-up. And so began a friendly, slightly twisted game of  custody of Barbie.

The back-and-forth has strengthened a special friendship between the families and Barbie has shown resilience. Her life between the two families has afforded her a full spectrum of adventure, dotted with fashion fads and international panache a propos any Cosmopolitan Barbie. Once she made it all the way to France in the Van Marters’ suitcase to be shipped back to the Bondis.

Like many teenagers, she’s tried on a few different identities. Her hair, once long, is now shaved and colored red. When hot yoga became the trend, Barbie was the first to try out the new fitness fad. Unfortunately, she was a little overcooked in the kitchen oven and her joints are now warped backwards. But her deformities didn’t hold her back from arriving at her graduation party dressed with flair in African fabrics, complete with a Liberty Bell green mortarboard cap and yellow honors sash.

Barbie plans to take a gap year before deciding on college or career, but she hopes to spend time with her two families before Cymone leaves for the University of Arizona. Amelia still has one more year at Liberty Bell so, for now, Barbie is at home in the Methow Valley awaiting her next adventure.