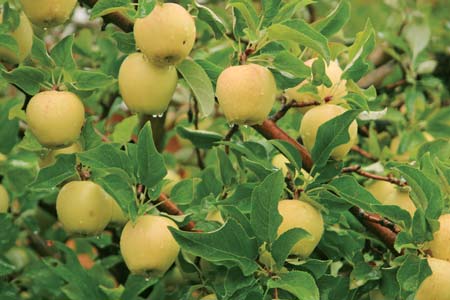 The Washington State Department of Ecology recently released a map showing the locations of about 115,000 acres of historic orchards that could be contaminated by lead arsenate pesticide, including many areas in the Methow Valley.

The map shows in red the location of land that was an orchard between 1900 and 1950, when the pesticide was widely used. Some locations are still orchards, while others have been converted to commercial or residential property.

Ecology section manager Valerie Bound said the map is intended to educate and inform residents, but not to alarm them about possible exposure.

“We feel like it’s better to be informed because then you can take steps,” she said. “If we test and you don’t have any lead and arsenic, then wonderful.”

If tests come back positive, there are a number of options for dealing with the contamination. About a week after releasing the map, Ecology released its most recent model remedies for dealing with contamination on former orchard properties, from excavating and removing the soil to mixing less contaminated soil with clean soil.

According to Ecology, lead arsenate was widely used throughout the United States in the first half of the 20th century. Between 1900 and 1950, it was used particularly in Yakima, Chelan, Douglas, Okanogan and parts of Benton counties to control codling moth infestations in fruit trees.

Ecology has identified 115,000 acres of land in Washington that was orchard land during that period of time and could be contaminated with lead and arsenic, which can cause health problems “especially for children or those who experience long-term exposure,” according to Ecology.

Lead and arsenic do not break down or biodegrade over time and in contaminated lands are typically found in the top two feet of soil, according to ecology. Lead and arsenic are not absorbed by plants.

Small patches of potentially contaminated land are also located near Beaver Creek, the town of Twisp, and on Twisp River Road. There are no suspected lead arsenate-contaminated sites north of Twisp on Highway 20.

Ecology staff worked with the city of Yakima’s mapping department to analyze current land use compared with historic aerial photos taken by the U.S. Geological Survey during the time when lead arsenate was widely used. The new maps released by Ecology show land in red that could be contaminated based on that analysis, though not every piece of property has been tested.

Ecology staff can use X-Ray Fluorescence technology to test for lead and arsenic in soil that is suspected to be contaminated. To set up a soil test, email FormerOrchards@ecy.wa.gov.

If contamination is confirmed, there are several steps a landowner can take to mitigate the risks.

The four options include excavating and removing contaminated soil to a landfill; putting a hard barrier, like asphalt, or a soft cap like landscaping, over the soil; excavating soil and capping it at a secondary location, or mixing less contaminated soil with clean soil.

If any remedy that contains contaminated soil is used on a property, all future property owners must be notified.

“I think what we’re trying to hit is new housing developments that are being converted, because if you have property right now that was a former orchard we can come out and test,” Bound said.

Ideally, she said a new homesite will be tested and cleaned up before a house is built.

There are also other options to reduce exposure include putting shoes outside and keeping dust down.

Bound said feedback from the public about the map has been positive.

“One of the reasons we put these maps together is (this) was one of the main questions people were asking us,” she said, saying people wanted to know if their property was once an orchard. “We didn’t know before. … Now this way we can say yes, yes it is.”