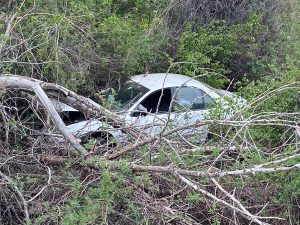 A car landed upright, 60 feet off Highway 20 among bushes and other vegetation, after the driver left the roadway on Wednesday (May 5).

Trevor Sparks, age 21, of Omak, was arrested on a charge of DUI after the incident, which occurred around 4:40 p.m., according to Washington State Patrol Trooper John Bryant. Sparks was traveling toward Twisp at around milepost 200 when his 2000 white Chevrolet Cavalier sedan left the roadway. He was booked into the Okanogan County jail.

Aero Methow Rescue Service responded and examined Sparks and a passenger. Neither was transported to a hospital, according to Okanogan County Fire District 6 Captain Zack Gurney, who was at the scene of the incident.

First responders had to disable the car’s battery because the horn was going off nonstop, Gurney said.

Classic Towing of Twisp removed the vehicle around 7 p.m.