While some fires help clear out old trees and brush and leave the land able to recover on its own, the Carlton Complex burned so hot in some areas that the forest needs a bit more help.

“There was nowhere for the seed to come from,” said Methow Valley District Ranger Chris Furr.

In one day last week, each reforesting crew member planted about 1,000 seedlings, for a total of 25,000 planted in one day.

This year, the Forest Service plans to replant about 287,000 seedlings on 1,800 acres this year in a three-week period.

“We’re doubling up because we had to push everything back because of COVID last year,” Furr said.

The trees planted last week were mostly pine, but also included some large and fir seedlings.

The pine trees in particular were organized by the elevation where they are most acclimatized, Furr said.

Ranger District staff kept track of where they harvested pinecones so the seedlings could then be planted at a similar elevation.

The trees were grown from seeds harvested from cones that Methow Valley Ranger District staff picked in 2018 and from seed orchards on Pole Pick Mountain and near Edelweiss farther up the valley. Many were grown at the Forest Service’s Coeur d’Alene Nursery, according to the Forest Service.

“Trees are planted in a ‘microclimate’ on the northeast side of down logs, stumps or standing trees to provide shade and give them the best chance for survival,” the Forest Service wrote in a news release.

While crews were planting young trees in lands burned in the Carlton Complex Fire, others were in Mazama using prescribed burns to prevent future wildfires in the Methow Valley. 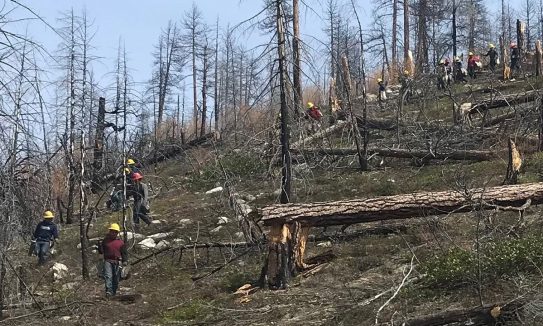 The U.S. Forest Service plans to replant 1,800 acres damaged by fire this year. 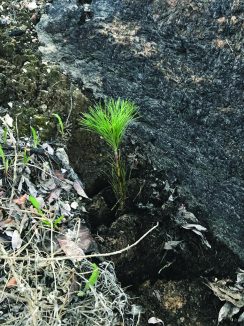