It’s been a season of overcoming challenges for the Liberty Bell High School girls’ soccer program.

With the campus fields covered by 2 feet of snow when the Washington Interscholastic Activities Association (WIAA) approved practices to begin in mid-February, the Mountain Lion kickers were relegated to the Eagle Gym at the elementary school, sharing time with the junior high volleyball team.

The roster numbers, depleted by several external factors, made fielding a complete team difficult and resulted in several matches being played with less than the proscribed 11 players on the pitch. Injuries also contributed to a smaller roster.

So, for the first time in this abbreviated, wrong-side-of-the-calendar season for the Liberty Bell girls, coach Katie Overbeck took a full roster of 15 players on the road to the Columbia Basin town of Royal City Saturday on March 20 to visit the 1A Knights of Royal High School. The Lions fell to the Knights by a score of 4-nil, dropping their season record to 0-7, but there was plenty of good stuff, according to Overbeck and newly signed-on assistant coach Annie Saunders.

With a focus on rebuilding after the loss of a strong senior class in 2019, Overbeck and Saunders have been concentrating on fundamental skills development and teamwork. Bella Chrastina, a newcomer to soccer in her senior year, said the teambuilding part has not been difficult. “I never played soccer before, but I really love it,” she said. “Everyone is so supportive and really helpful.”

Saunders noted that “the team demonstrated strong passing skills and moved the ball well around the field. Liberty Bell made use of every player on the field and stretched the field of play.” Of special note, “Elke Wathen and Maisy Shaw put constant pressure on [Royal’s] defense with their quick passing and ball skills,” according to Saunders. Sophia Newton added some good offensive opportunities with her give-and-go passing from the center, and while they had good movement, the Lions couldn’t quite get the ball into the net past the Knights’ goalkeeper.

On the defensive side of the pitch, senior Cymone Van Marter and junior McKenna Kurtz held down the backfield admirably as they have been necessarily shuffled around to different positions this year. Indeed, while playing defensively at Royal, Van Marter also leads the Mountain Lion offensive effort in goals scored on the season.

The Mountain Lions made a return trip to Bridgeport on Tuesday (March 23), results not known at press time. Saturday (March 27) they return to Brewster for a rematch with the Bears, seeking to tie the season series at one win apiece. Kickoff is scheduled for 11 a.m. Looking ahead, Liberty Bell is slated to host a home match on Saturday, April 3. With the change to Phase 3 in the COVID reopening protocols, there will be tickets issued to team members for family to attend that match.

Liberty Bell traveled back down the Columbia for the second straight week to run at the Wenatchee Panther Invitational at Walla Walla Point City Park. Team numbers were depleted for various reasons, as the Mountain Lions looked forward to the Central Washington B League Championships at Manson on Wednesday (March 24).

Notable in their return to action on the girls’ side were seniors Liv Aspholm and Lena Nelson, both placing in the top 15. For the boys, freshman Aksel Thomson showed well with his second straight top 10 finish, placing eighth. Sophomore Isaiah Stoothoff finished 11th. Jackson Schmekel (28th), Kyler Mitchell (32nd) and Madison Strauss (47th) rounded out the Liberty Bell team.

Liberty Bell’s volleyball team took on the Okanogan Bulldogs and host team Tonasket Tigers in double-header action at Tonasket High School on Saturday (March 20). The Mountain Lions dropped their match with Okanogan in three sets, 8-25, 19-25 and 15-25 before turning the tables and defeating Tonasket 23-25, 25-18, 25-14 and 25-13. Liberty Bell ran its season record to 5 wins against 3 losses.

Jadyn Mitchell led the Lions against the Bulldogs with 9 kills and 3 blocks, and Ellie Blank added 4 service aces. In the Tonasket match, Mitchell again led with 15 kills and 7 blocks, Shae Taylor had 5 kills, and Blank and Caitlyn Cooley each had four kill shots. Liberty Bell combined for 19 aces, Blank serving up 11.

Coach Christine Scott identified Mitchell as having a good day at Tonasket. “Jadyn has been a consistently solid player this whole year playing the entire match,” said Scott. “She is learning how to play smarter and growing into a better volleyball player from last year.”

Sophomore Ellie Blank also caught the recognition of Scott: “With tough serving, (she) really threw the opposite team to make some out-of-system plays, which ended with us winning the point,” referring to Blank’s 11 service aces against the Tigers.

Liberty Bell has been playing Saturday double-headers this year, where one team hosts two other schools in a day-long event. One of the main challenges of this year’s scheduling has been the lack of activity between games.

“We have been struggling all season with sitting in a gym all day and finding the momentum to play that second game,” Scott said.

The reduced roster numbers this year have been beneficial for the current team, according to Scott. “Our small numbers mean the girls are getting lots of touches each day. Playing entire matches. Overall great experience,” she said.

“All the little things are clicking for the girls. Footwork has been something we have struggled with and what we work on most,” the coach added. “That piece is falling into place.”

On Friday (March 26), the Lions get another shot at the Bulldogs in a single match, scheduled for a 6:30 p.m. start at Okanogan High School. On Tuesday (March 30), Liberty Bell hosts the Omak Pioneers in the Lions’ Den, then closes out the season with one final double-header match at Liberty Bell on April 3, when Tonasket and Pateros invade.

The last time the Mountain Lions traveled to Entiat to play B8 football it didn’t go so well for the Methow Valley men as they lost 72-20. Coming off a big win a week ago at Soap Lake, the Lions hoped to turn the tables and experience victory at the expense of the Tigers. Liberty Bell came away with an 84-0 win. The Lions extended their season record to 2-1 with the victory heading into this week’s contest at Waterville.

Riley Lidey, honored last week as a WIAA Athlete of the Week, opened the game at quarterback and played well, completing 7 of his 10 passing attempts for 187 yards, no interceptions and four touchdowns. He added 11 yards rushing and scored on three rushing two-point conversions. Lucaas Gonzales-Ortega filled in the second half at the quarterback position, completing 1 of 4 passing attempts and rushing for 84 yards and two touchdowns. Dusty Patterson contributed 165 rushing yards and two touchdowns. Bodie Paul also broke the century mark, rushing for 111 yards on 10 carries.

On defense, Alex Tareski rejoined the football team after completing his biathlon season, leading Liberty Bell with 13 tackles, including 5 quarterback sacks. Sawyer Crandall intercepted 3 Tiger passes, returned one for a touchdown, and Patterson picked off one Entiat pas, as well.

In a display of solidarity and sympathy, each Mountain Lion football player wore the number 4 and the initials “CG” on their helmets Saturday, in memory of Brewster’s Cade Gebbers who died earlier in the week. Gebbers was an all-league athlete in his senior year at Brewster, having earned tournament MVP and All State honors in basketball for the Bears’ state championship 2019-20 season.

Spectators to be allowed at some home games

Student athletes will be presented four tickets per event for parents and immediate family members to attend athletic events in person, on the Liberty Bell campus only. The Central Washington B League does not permit spectators from visiting schools to attend events in person until further notice.

Those in attendance will be required to wear masks at all times and adhere to social distancing rules and other COVID mitigation protocols, Wilbur said in a statement. Event staff will screen fans who enter the facility for an event, just as they do students entering the district’s buildings, and will be enforcing masking and physical distancing.

Liberty Bell has two upcoming volleyball matches in the Lions’ Den on March 30 and April 3. Home football (April 2) and girls’ soccer (April 3) are also scheduled if the field is clear of snow. 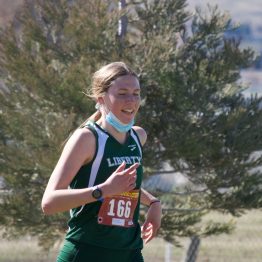 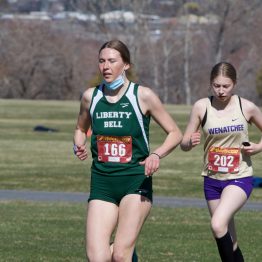 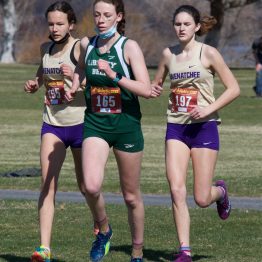 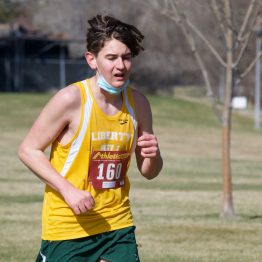 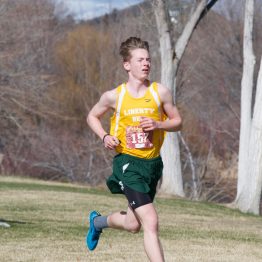 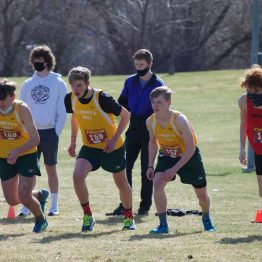 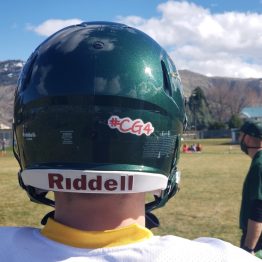 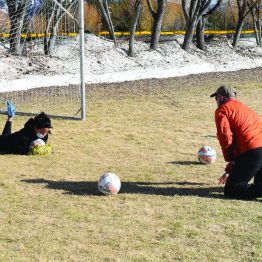 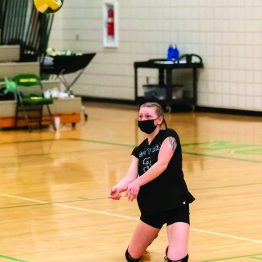 Photo by Eli Smith Liberty Bell’s Madi Surface dropped to the floor for a return during a recent volleyball practice.