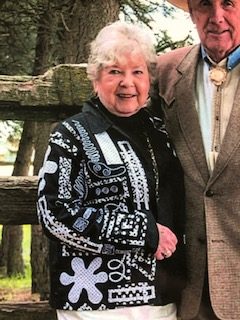 Janet Glassburn passed away due to heart failure on Dec. 26, 2020, at the home of her daughter, Terry Glassburn, in Puyallup, Washington. Janet was born on Feb.1, 1937, to parents John and Olive Carroll of Plentywood, Montana. Her family moved to Seattle, Washington, when she was a young child. She married the love of her life, Hugh Glassburn, on Feb. 26, 1955 when she was 18. They had three children together: Teresa Glassburn O’Connor, Scott H. Glassburn and Suzanne M. Glassburn. They raised their granddaughter, Amanda (Taylor) Hammer, as their own child as well.

In the spring of 1970 the family started the process of moving to Winthrop, Washington. Hugh bought the Mobile gas station in town and Janet did the bookwork for the business. They built their dream home on West Chewuch Road and they lived there for the rest of their lives. Janet was a wonderful wife and mother. Her home was always warm and welcoming. She cooked delicious meals every day for her family. She was the heart of the home.

She also had many friends. She loved her Wednesday lunch group. She was a 35-year member of the American Legion Auxiliary. She so enjoyed being active in the Winthrop community and giving out cookies at “Christmas at the End of the Road.” She was witty, funny and happy in perfect proportion.

Janet is preceded in death by her parents. Also preceded by her husband of 64 years, Hugh Glassburn. She is survived by her three children, Teresa Glassburn O’Connor (Mike), Scott Glassburn and Suzanne Glassburn. Also her grandchildren, Amanda Hammer, Kassy Goshen and Evan O’Connor, and five great-grandchildren.

Janet lived her final years in the home of her daughter, Terry. After the passing of her husband she needed a little extra help. She was happy to have all her meals at the table with family every day and to be involved with the bustle of family life.

Memorial to be announced in the spring.