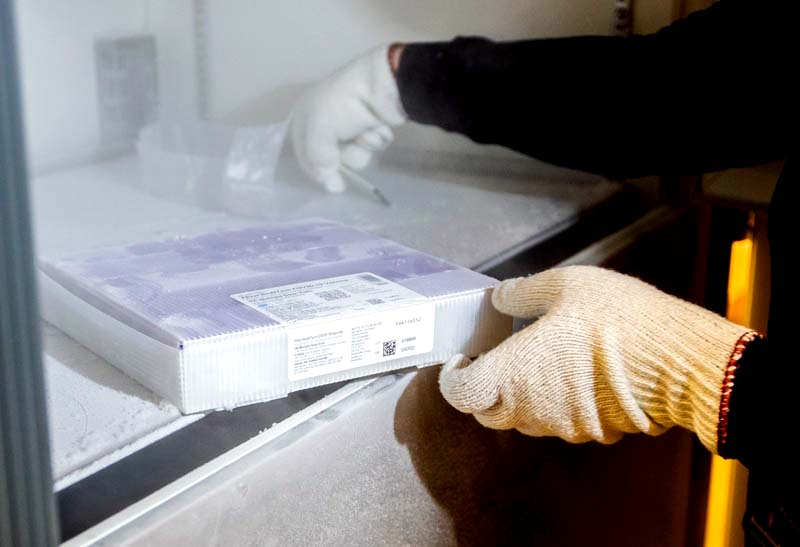 Winter storms delayed shipments of COVID-19 vaccine throughout the nation last week, and the impact was felt locally when Three Rivers Hospital had to reschedule appointments for second shots for about 50 people.

“We had ordered 300 second doses for the week, and didn’t find out until late Tuesday night (Feb. 16) that we would not receive them due to the weather issues across the country,” said Jennifer Best, spokesperson for Three Rivers Hospital in Brewster.

Patients were rescheduled to get their second shots at events in Winthrop or Pateros this week, Best said. “Everyone was understanding about having to be pushed back a week, which we really appreciate,” she said.

Three Rivers Hospital is providing the Moderna vaccine, which is recommended to be given in two doses, four weeks apart. The delay means some people will get their shots about five weeks apart, but that is not a problem, Best said.

“Fortunately, we now have evidence that the Moderna vaccine’s second dose is just as effective up to six weeks after receiving the first dose, so the folks who were rescheduled to this week will be fine,” she said.

State health officials estimated that about 90% of the vaccines scheduled to arrive in Washington last week were delayed.

The four vaccine providers in Okanogan County are working together to continue increasing the pace of vaccinations, and are planning a joint event on Friday (Feb 26) at the Okanogan County Fairgrounds, where they hope to provide first doses to about 400 people, Best said.

Three Rivers Hospital, Family Health Centers and Mid-Valley Hospital in Omak will use their waiting lists to make appointments for the event. “North Valley Hospital has been successful in depleting its own waiting list, so they’re providing the Pfizer vaccine and some of the staffing for this event,” Best said.

Because many people have registered for a vaccination with more than one provider, there is crossover among the waiting lists, Best said. “We’re working on compiling our waiting lists now and … eliminating duplicate registrations.”

Vaccine providers have been working with the county Public Health and Emergency Management departments to create a one-stop registration system to simplify the process of registering for the public and reduce the extra work hospitals and clinics are doing, such as sharing completed vaccine lists to eliminate duplicate registrations.

“It is important that we create a more sustainable process to relieve the burden on our pandemic-weary health care teams,” said Afton May, director of quality and risk at Mid-Valley Hospital. An automated and centralized registration and notification process “will be a game changer as we go forward,” she said.

Some providers are already working with Emergency Management to send out pre-recorded appointment reminders.

The bottleneck of vaccine supply to local health care organizations has created frustration among residents waiting for their first dose. The state recently directed providers to prioritize second doses to make sure people get fully vaccinated on the recommended schedule.

“We have not received any vaccine for first doses in three weeks,” said Gretchen Aguilar, chief nursing officer at Three Rivers Hospital. “We are getting just enough supply from the state to cover our second doses, but that’s it for now. We don’t know yet when we will have a new supply for first doses.”

Three Rivers stopped scheduling first dose appointments in late January. Once it is able to resume making appointments, it will pick up with registrations submitted around Jan. 21, Best said.

“Not having new vaccine supply on a consistent basis has really drawn out the wait times for us at Three Rivers, and other facilities have been in a similar position of having to postpone scheduling new appointments,” Best said.  “Most people have been incredibly understanding and kind, and we’re so grateful for that. We have received some frustrated calls and emails.”

May said most of the frustration seems to stem from people fearing “they will be forgotten in the process.” Once a registration form has been submitted, residents need to wait for a call for an appointment, and the wait time may be a week or more.

North Valley Hospital has been able to reduce its wait list to about 100 people and will be able to schedule first shots again soon, said CEO John McReynolds.

The Washington Department of Health (DOH) announced last week that the state will allocate more doses to counties with larger populations of people eligible to be vaccinated under Phases 1A and 1B Tier 1. “This may mean some counties get more vaccine than others,” DOH said.

“We seem to be finding the end of the B1 group that is eager to get the vaccine. Waiting lists are shrinking and although we have much more outreach to do, it does seem the pent-up demand is more urban counties,” McReynolds said.

“We also have patients that live in Seattle or Everett applying to be vaccinated in Tonasket. The fact that people are willing to drive over the pass and take a five- or six-hour drive tells me that we have been very fortunate to receive as much vaccine as we have,” McReynolds said.

Providers in Okanogan County have taken different approaches to vaccinating people from out-of-area, but North Valley Hospital is scheduling all applicants, whether they live in the county or not, McReynolds said. “When we had a long waitlist we did prioritize local residents first, but with the current supply and capacity, we are taking everyone in a first-come, first-serve basis.”

The decision to increase vaccine supply in more populated counties means “people in urban areas should have better access to the vaccine closer to home, so they may no longer feel the need to travel over here just to get it,” Best said.

And, she added, making sure people are vaccinated before traveling in the summer for tourism and recreation “will help protect our communities in North Central Washington.”

Okanogan County providers have been organizing large vaccine events, by appointment only, at centrally located sites like the county fairgrounds in Okanogan, Liberty Bell High School in Winthrop, and the Douglas-Okanogan County Fire District 15 station in Pateros.

Because health care organizations don’t know in advance how much vaccine they can expect, many of the events are planned and executed in a matter of days.

Vaccine providers are also trying to address inequities in access to vaccination among county residents. “For Three Rivers, less than 10% of people who have been vaccinated so far are Hispanic. I know the numbers from other facilities are also lower than they could be, so this has been a major topic of discussion at our countywide COVID meetings lately,” Best said.

“There is a clear need to find alternative ways to reach those community members to provide education about the vaccine and help them get registered,” she said. “We’re delivering vaccine information to local churches, schools and businesses to help us get the word out and try to encourage more people to sign up and get vaccinated.”

Information in Spanish about vaccinations is available from providers through their websites and flyers, and other outreach ideas are being explored, Best said.

“Quite a few Hispanic community members who would qualify under Phase 1B are still in the work force, so there’s even more of an urgency to help them get vaccinated sooner than later, especially as we move into the warmer months and agricultural work picks up. We want them to be able to work as safely as possible,” Best said.

Under the state’s eligibility guidelines, vaccinations are currently open to Phases 1A, which includes health care workers at risk of COVID-19 infection, first responders, people who live or work in long-term care facilities, and 1B Tier 1, which includes anyone 65 and older, and people 50 and older who live in a multigenerational household.