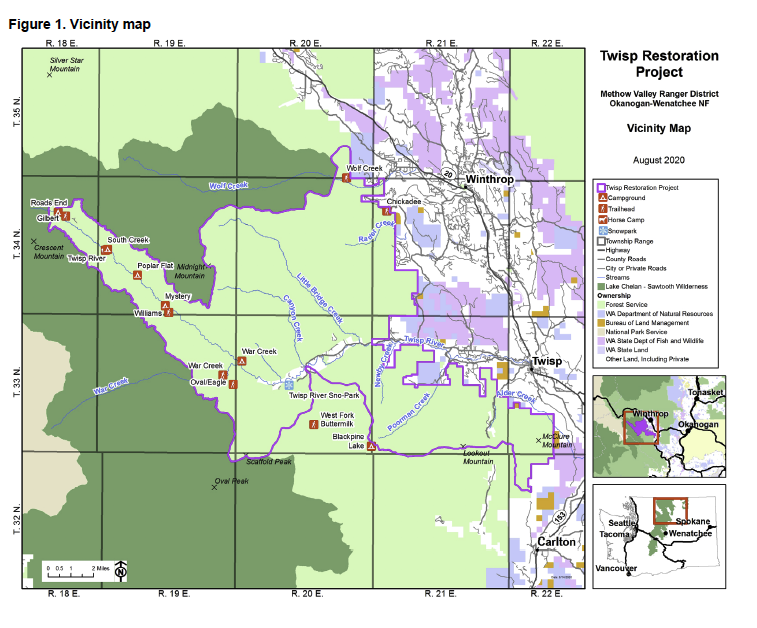 Final assessment  to be released by this summer

While many commenters expressed a desire and commitment to pursue environmental restoration and wildfire prevention in the Twisp River watershed — stated goals of the project — few offered wholesale support of the proposal in its entirety.

Most common concerns included objections to cutting down some of the Methow’s largest trees, or those above 20 inches in diameter, concerns about habitat including the Northern spotted owl and a widely panned addition to the plan adding access for all-terrain vehicles.

“The amount of thoughtful, substantive feedback we received on this project is much higher than we have seen for similar projects in the past,” Methow District Ranger Chris Furr said in a statement released Monday afternoon (Feb. 22). “It speaks volumes about the importance of the project area to the community and others and the number of opportunities we have in the Methow Valley to work together towards shared objectives.”

On Monday, the U.S. Forest Service announced it was finishing reviewing the comments and planned to work with the North Central Washington Forest Health Collaborative to “address input.”

The Forest Service indicates it will complete the final environmental assessment this summer, which will then be subject to a formal objection period.

A virtual public meeting will be scheduled this spring, and will be announced at www.fs.usda.gov/project/?project=56554.

Furr told the Methow Valley News this week that the Forest Service has yet to determine whether there will be a finding of no significant impact, allowing the project to go forward with just the environmental assessment, or if the agency will determine that it needs the more in-depth environmental impact statement to satisfy requirements under the National Environmental Policy Act.

“We did hear loud and clear the importance of this area for folks and the concerns and are really working to address those,” he said.

Dozens of comments from individuals came as a signed form letter.

“The Twisp River is a unique and special place. It is the first place wolves were documented breeding in Washington state when they returned, and where imperiled spotted owls were last detected in the valley,” the letter reads. “It is home to wolverines, Canada lynx, moose, mule deer, mountain goats, Chinook salmon, steelhead and bull trout and an array of other fish and wildlife.”

The citizens who signed that letter were among other groups that raised concerns that the project was too large, or too large to be considered with only an Environmental Assessment (EA), rather than the more detailed Environmental Impact Statement (EIS), under the NEPA.

According to the EA, part of its purpose is to determine whether an EIS is needed, based on whether implementation of the proposed work would affect “the quality of the human environment.”

An EIS is a more in-depth, scientific look at possible impacts of a project looking into the future. That is generally used when a project is expected to have a significant impact on the land around it.

“(T)he scale and scope of this project with the uncertainties involved strongly suggests an EIS might be necessary,” a comment from Conservation Northwest reads.

The Twisp Restoration Project, first introduced to area residents in a public meeting in November 2019, proposes work on an area more than 77,000 acres in size over the next 30 years.

The area is in the Methow Valley Ranger District in the Okanogan-Wenatchee National Forest and is made up of land around the Twisp River, Alder Creek, Rader Creek and Wolf Creek drainages. The Buttermilk Creek drainage is excluded because it is included in the Mission Restoration project. The Forest Service is the lead agency for the project.

The project is intended to address a number of issues, including fish passage and aquatic habitat, wildlife habitat, timber health, wildfire hazard and safe roads and trails.

The draft Environmental Assessment was first released to the public in November 2020 for a 30-day comment period. The initial comment period was extended through mid-December due to COVID-19, but some groups said that still isn’t enough.

“A project of this size and duration … requires scrutiny by a breadth of stakeholders and this has not been pursued and is not planned,” the MVCC wrote. “Public comment is a dynamic process that requires interactive engagements over time.”

The MVCC noted the Methow Valley Ranger District has had two one-hour public meetings on the project in two years, with one taking place virtually.

The scope of the decades-long restoration proposal generated numerous comments.

“The scale of this project is encouraging and seems appropriate considering that much of the lower watershed has been altered due to decades of fire exclusion, grazing and logging,” the MVCC wrote. “There is an ambitious goal to prescribe burn over 58,000 acres.”

State Department of Natural Resources (DNR) State Forester George Geissler noted that the watersheds in the EA fall within the state’s 20-Year Forest Health Strategic Plan for Eastern Washington, and that the DNR had already conducted an assessment of forest health treatments in the area covered by the EA.

The DNR is working on the Twisp Restoration Project through the North Central Washington Forest Health Collaborative and through a memorandum of understanding with the Forest Service.

“We strongly support the scope and scale of proposed restoration activities as they will address the majority of forest health treatment need identified in our landscape evaluation for the Twisp River priority planning area,” Geissler wrote.

Other organizations had questions about how the Forest Service would measure the effectiveness of the proposed work.

“(W)hile the scale of the propose(d) action appears appropriate, we had difficulty finding clear links between the results of the landscape evaluations, the proposed actions, and the effects analysis,” the comment from Conservation Northwest reads. “This leaves many questions and uncertainty about why certain restoration actions are needed and how or whether the proposed action will result in improved conditions.”

Conservation Northwest goes on to say that the EA doesn’t reflect actual, on the ground conditions in some areas, and that its prescriptions for treatments are too general: “This broad brush approach in the EA, particularly for condition-based management, does not provide sufficient information to evaluate direct, indirect, and cumulative effects, or for a ‘hard look’ under NEPA.”

The Washington Department of Fish and Wildlife (WDFW) had similar comments, while noting that the agency supports efforts to move forested areas in the Methow Valley to a more “historic range of variability.”

“(T)he scale of the project and the overall uniformity of the prescriptions need to be carefully evaluated considering the limited amount of habitat …,” the letter reads.

A major portion of the project includes thinning forested areas for ecological and wildfire-reduction reasons.

The WDFW commented against portions of the proposal including commercial timber harvest in “designated Inventoried Roadless areas,” and the harvest of trees between 25 and 30 inches in diameter. It also commented against salvage logging in the Crescent Fire area.

While generally praising the project’s goals of protecting the region from catastrophic wildfires, C6 Forest to Farm also expressed concern about tree harvest portions of the plan.

“In our experience the largest trees in the Methow Valley generally peak at 21 inches in diameter,” MVCC wrote.

Hampton Lumber Mills wrote in support of thinning trees as large as 30 inches in diameter as part of a commercial treatment.

“Our sawmills at Darrington, Morton and Randle are directly linked to the raw material outputs from the Okanogan-Wenatchee National Forest,” wrote Anjolene Price, collaborative forestry manager at Hampton Lumber Mills. “ … Our ability to support these communities and source our manufacturing facilities is highly dependent on the availability of raw material from the USFS timber sale program or stewardship projects.”

Price said that Hampton Lumber Mills supports the environmental goals, but would like the final EA to emphasize and include economics, regarding the timber harvest, as part of its “defined purpose and need.” The business also supports thinning in stands over 80 years old.

While the idea of commercial logging concerned many members of the public, the DNR actually recommends increased focus on commercial thinning operations.

“Research from across the interior west has shown that mechanical treatments that remove trees are the most effective at reducing density, fuel loads, and crown fire risk, especially when followed by prescribed fire,” Geissler wrote. “Non-commercial and fire only treatments can accomplish these goals, but require allocation of limited treatment dollars and often necessitate multiple entries to sufficiently reduce fuels.”

The Yakama Nation and Colville Confederated Tribes voiced support of portions of the project focusing on restoring fish habitat and prioritizing native plants.

“As with our scoping period comments, we remain very supportive of this project being implemented in a timely manner that is focused on providing the highest benefit to (Endangered Species Act) listed fish stocks in these critical watersheds,” the Yakama Nation’s comment letter reads.

The tribe, however, noted disappointment that the draft did not include additional analysis on mitigation for the impacts of roads near fish habitat that may not be removed, as the tribe had requested.

The Colville Confederated Tribes’ Historic Preservation Officer Guy Moura also wrote in favor of the project, saying it will “serve to project and enhance an important resource for our membership.”

“Our Tribal members view natural resources as cultural resources,” Moura wrote, saying his office appreciates the consideration given to plants, including huckleberries, in the EA. “Traditional cultural plants are not only cherished for fiber, food, medicine, and building materials but are an intrinsic aspect of indigenous sovereignty.”

The WDFW also commented in favor of the fish-related projects, as did a number of individuals and the North Central Washington Forest Health Collaborative.

“We encourage the (Methow Valley Ranger District) to maximize the aquatic habitat restoration objectives within the planning area, with a priority of maintaining and increasing the amount of high-functioning quality habitat for aquatic organisms,” the collaborative’s comment reads. “This is a high priority watershed for the recovery of federally listed bull trout, Upper Columbia spring-run Chinook and steelhead.”

Fish are not the only endangered or threatened species referenced in the plan.

The plan proposes wheeled all-terrain vehicle (WATV) access between April 1 and Oct. 31 on “designated groomed snowmobile routes” on a number of forest service roads. Commenters almost uniformly rejected the idea, saying that adding ATV use to a forest restoration plan was counterproductive.

“One of the main documented effects or ATV trails is the effect on soils and, as a result, water quality,” wrote Twisp River Road resident Fred Runkel. “ATV traffic has been shown to compact soils, increasing runoff and eventually reducing water quality in streams that receive the runoff. In the burned areas of forests, isn’t this type of problem something that the fires have exacerbated? Why would we want to add to the problem by inviting ATV use?”

The MVCC agreed, as did Conservation Northwest, the Pacific Watershed Institute and others. The WDFW’s comment stated ATV use was inconsistent with restoration.

“Consideration of ATV access along the Upper Twisp River does not belong in this plan for forest restoration,” the MVCC wrote. “It is contradictory and not compatible with many of the ecological restoration objectives and proposed actions …”

“(T)he ATV decision seems to be outside the scope of a restoration project and it may be better to make a stand-alone decision on ATV use following a mixed-used analysis which is currently lacking,” Conservation Northwest’s comment reads. “Remove new ATV routes from the proposal.”

For more information on the project, go to https://www.fs.usda.gov/project/?project=56554&exp=overview.