The Okanogan County commissioners have expanded the ban on subdivisions in the Methow watershed, eliminating an exception that had allowed people to create a new building lot from a parcel with an existing house on it.

The commissioners unanimously adopted the ordinance on Jan. 26.

The commissioners eliminated the exception after receiving a legal opinion in January on water law and the Methow Rule, which allocates a limited amount of water for specific uses. Last year, the county asked the state Department of Ecology for its interpretation of rules governing wells for what’s called single-domestic use, which allows withdrawal of 5,000 gallons of water for a house, livestock and a half-acre garden. 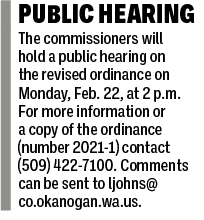 The opinion by state Assistant Attorney General Alan Reichman, who handles matters for Ecology, found that the county’s policy allowing division of a parcel of land with one existing home to construct an additional home is not lawful because it creates group-domestic use of water for two homes, not single-domestic use.

The commissioners accept that dividing an undeveloped lot to create two lots, each with its own well, would be a group water use, because water had never been withdrawn in the first place, Okanogan County Commissioner Andy Hover said.

But they don’t understand how Ecology and the assistant attorney general concluded that an “existing withdrawal is suddenly split when the land is subdivided,” Hover said. A new lot starts from scratch, he said.

“One could argue that this provision of the ordinance does not allow water use that would conflict with the [Methow] Rule because the approval of a subdivision would only result in the construction of a single additional home that would have its own well (in addition to the existing home with its own well),” Reichman said. “However, this argument is flawed because approval of the subdivision would actually result in group domestic use.”

The revised ordinance retains some exceptions. Land divisions that create parcels of at least 20 acres are permitted, because they’re exempt from the state’s subdivision code. For those lots, the determination of water availability is made when someone applies for a building permit, Hover said.

People can still divide land for agriculture or a non-residential use. And property that draws from the Columbia River, not the Methow River, is also exempt from the moratorium.

The ordinance commits the county to study water availability and the provisions of the Methow Rule. They’ll also explore water mitigations that could enable people to build.

The revised ordinance will be in effect for one year, pending a public hearing on Feb. 22, which is required by law because it was adopted on an interim basis.

The 1976 Methow Rule sets aside a certain amount of water for use in seven reaches in the Methow and establishes a priority of uses for that water, with individual houses (single-domestic) at the top of the list, even before water for fish in rivers (instream flows).

That means these houses get water even before ensuring there’s water in rivers for fish. All other uses — municipal (Twisp and Winthrop) and group-domestic (a development with several houses) are further down on the list.

Moreover, those uses are “interruptible” — meaning water withdrawals could be restricted when river levels are low, Reichman said. A water source that could be cut off doesn’t meet public health requirements for a residence.

How to handle existing lots?

Reichman also pointed to a 2002 state Supreme Court ruling called Campbell & Gwinn, in which the court found that a proposed subdivision with 20 homes constituted group use and required a water right. Applying this decision to the Methow, Reichman said all homes in subdivisions constitute group use.

Reichman confirmed that existing homes are not affected by his interpretation. But it should apply to any pending applications for subdivisions, he said. To approve a subdivision application, Okanogan County is required to determine that there is adequate water supply to serve the proposed new homes, Reichman said.

In assessing water adequacy for new building permits, Reichman suggested the county might want to create two categories, looking at lots created before and after 2002, where only the pre-2002 lots could rely on single-domestic wells, he said.

The commissioners disagree with Reichman’s interpretation about lots created through a subdivision since 2002, Hover said. They are considering mounting a legal challenge to get clarification from a court about how to handle applications for development on these approximately 230 existing lots, he said.

The commissioners will discuss the potential legal action this week, Hover said.

The commissioners adopted the first subdivision moratorium in December 2019 after attorneys from the county and an outside firm specializing in water law said the county could be at risk of lawsuits if it continued to allow the creation of new building lots, Hover said.