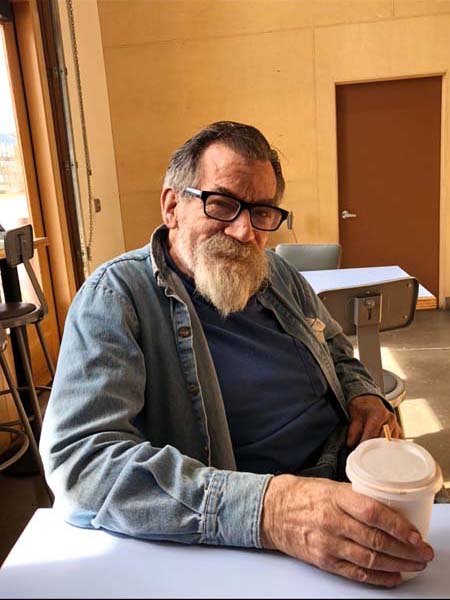 Lou’s greatest loves were obvious to all who knew him: exploring the American wilderness, literature — especially ancient Greek, motorcycles and his work as an English teacher. His lifelong passion for the outdoors began in his youth. He grew up in the Detroit suburb of Dearborn but spent time playing in the surrounding wooded areas. He was also a Boy Scout and rose through the ranks to become an Eagle Scout.

After graduating from Edsel Ford High School in 1957, Lou relocated to Michigan’s Upper Peninsula, a remote, wild and stunningly beautiful region covered by northern hardwood forests. There, he attended Northern Michigan University, earning a Bachelor of Sciences in Secondary Education in 1966 and a Master of Arts in 1968.

Following graduation, Lou worked at the university as an English instructor until 1974. The young Mr. Kallery soon attracted a loyal following of students around him and earned a bit of a reputation as a rebel. One story features him creating a stir on NMU’s campus by driving his motorcycle through the grounds.

But it was his unwavering dedication to educating young minds that would define his entire career — and in many ways, his life. Students and faculty alike described him as challenging but fair. As one former Liberty Bell colleague put it, “He demanded excellence and received excellence.” Comparisons have been drawn between Lou and the character of inspiring English teacher Mr. Keating played by Robin Williams in the 1989 film “Dead Poets Society,” who used unorthodox teaching methods to show how literature and writing matter in students’ own lives.

In 1974, Lou left Michigan for the western United States, living first in Cody, Wyoming, and then in Ely, Nevada, where he taught at White Pine High School for 10 years. During his tenure there, he coordinated a program for the academically talented. In 1987, Lou settled in the Methow Valley and taught at Liberty Bell High School until his retirement in 2005. A letter from the superintendent from that time noted that he’d earned an outsize number of compliments from students and families.

A true adventurer, Lou wasn’t satisfied with sticking to well-worn trails. He made cross-country road trips — sometimes just on his motorcycle — and ventured deep into the mountains and desert to take photographs, hike and explore. Of all the wonders he’d come across in his travels, one was a favorite that he mentioned often: an ancient etching on a cave wall that had been left virtually untouched by time. What struck him most was that the artist, in attempting to render this image of an animal, had made several attempts before arriving at the finished product — exemplifying humankind’s innate drive toward excellence.

Lou was not only an English teacher but an insatiable scholar and avid reader, often losing himself in a book until the early morning hours. Some of his favorites were “The Odyssey,” “The Iliad,” “The Aeneid” and “Zen and the Art of Motorcycle Maintenance.” Other passions included shooting his rifle, archery and fixing up old motorcycles.

He was well-known for his exceptional intelligence and eloquence tempered with a core of rugged charm, as well as his head of thick, lustrous dark hair and a smile that couldn’t be hidden by his beard because you’d see it twinkling in his brown eyes. He enjoyed playful banter and his sense of humor extended first and foremost to himself. He was particularly delighted by some affectionate caricatures a few former students had drawn of him. Lou was unpretentious and could talk to anyone, but he had a low tolerance for snobs. He would often enunciate the word “LIT-er-a-ture” in a snooty accent as a joking takedown of literary elitism.

Lou Kallery was the proud father of daughters Christina (Kallery) and Anna (Vintin), son-in-law Jason, son Sean, daughter-in-law Linda and grandfather to Soren (Vintin) and Quinn (Kallery, and another on the way). He is further survived by extended family and many loving friends, colleagues and former students, along with his much-adored little dog and constant companion of 15 years, Elf.

A memorial service is tentatively planned for the springtime when it can be done safely and will be open to all who would like to pay their respects. In the meantime, those who want to share a memory of Lou may do so here: https://cadycremationservices.com/obituaries/louis-f-kallery.