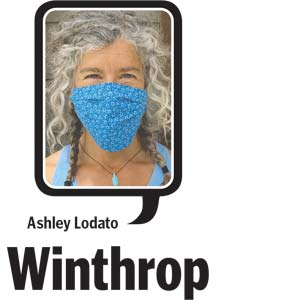 A month or so ago I wrote about Bluebird Grain Farms appearing on King 5 news. What I didn’t know is that King 5 TV didn’t trek out to the Methow Valley to create the film; it was local filmmaker, musician, and artist Terry Hunt who provided the footage.

“The Bluebird thing happened out of the blue,” says Terry. “Bluebird’s marketing person called me to say that King 5 wanted to run a segment on Bluebird Grain Farms but couldn’t send a filmmaker out due to COVID restrictions. They wondered if I would be able to provide them with footage.”

After speaking with King 5 and learning more about their goals for the segment, Terry — who had filmed Bluebird Grain Farms about 10 years ago for a farming movie — went up to Bluebird’s granary and processing facility in the Rendezvous a couple of times and used his drone as well as his regular video camera to capture different aspects of Bluebird’s operations, including speaking with Brooke and Sam Lucy, owners and farmers of the business. He then put the footage in a DropBox (which took all night to upload!) and King 5 retrieved it the next day.

In order to fly his drone, Terry had to earn a pilot’s license, which he did several years ago. The first time he took the test he had to drive to Ellensburg; for subsequent renewals, which happen every two years, he takes a test online. “The drone can be loud and disruptive,” Terry says of drone filming, “but it captures things in a way that no other tool can. And people are interested in it, so I get interesting footage out of it.”

Early in the pandemic, Terry posted another film to his website, featuring the Classroom in Bloom school garden. Narrated by Terry’s wife, Pam, the film is anchored by a script Terry wrote after interviewing Classroom in Bloom staff Kim Bondi and Emily Post, as well as Methow Valley School District Supt. Tom Venable.

Since the pandemic started, Terry says he thought to himself, “it’s time to get things done.” In addition to completing the Bluebird and Classroom in Bloom films, Terry has been working on wood art pieces, some of which will appear in Confluence Gallery’s “Treespeak” exhibit which opens Saturday (July 25). “The pandemic has fueled my creativity,” Terry says, “but more importantly it has given me time.”

You can see some of Terry’s films at http://www.methowtv.com or visit his art pieces in person at Confluence Gallery in Twisp.