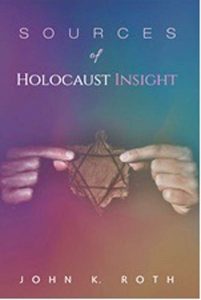 John Roth moved to the Methow Valley 11 years ago, after retiring  as a college professor of philosophy. But Roth did not retire from writing.

Finding the Methow a great place to write from, he recently published his first memoir, “Sources of Holocaust Insight: Learning and Teaching about the Genocide.” He has written or edited upwards of 50 books, Roth said.

And while Roth no longer teaches at Claremont McKenna College, where he was a founding director of the Center for the Study of the Holocaust, Genocide, and Human Rights, he’s joined the Liberty Bell Junior-Senior High School seventh-grade class for a seven-week exploration of “The Diary of Anne Frank,” which is led by teachers Jane Orme, Dani Golden and Jana Mohr Lone.

“Anne Frank’s diary covers a period of time when Anne was the same age as the students reading it today,” said Orme. “It is also about those who put their lives on the line to help others. The study of this book brings up important questions about our present struggles with oppression and anti-Semitism.”

“I’ve graduated to the seventh grade,” joked Roth about his now five-year stint working with the students. He noted that the material he covers is not very different from what he’s done with some of his college students.

“[Roth] plans a series of lectures using media, literature and discussion,” said Orme. “He provides a perspective from his many years as a scholar of the Holocaust … and historical context for Anne’s diary as well as other events of World War II.”

“I think of myself as the color commentator,” quipped Roth about his role. “[But] I see myself as having a responsibility to convey the importance of the Holocaust. There’s a need to protest, resist, and overcome the forces of injustice that are always present.”

During Roth’s time with the seventh-grade class last year, a discussion of anti-Semitism led to talking about the meaning and symbolism behind the swastika. When a student shared that swastikas had been drawn in a bathroom at the school, the conversation blossomed into a teaching moment that Roth considers one of the most powerful of his career.

“You see light bulbs begin to turn on, [especially when the students see] connections between what we are studying and what is going on in the world now,” said Roth.

Over his past five years working with the seventh-grade class, there is one question that always arises in regard to “The Diary of Anne Frank.”

“They wonder, as they put it, ‘who ratted them out?’” Roth said. That’s a question that scholars don’t know the answer to. Roth relates to that, because questions without clear answers are exactly what philosophers deal with.

“You don’t go to the career counselor and say I want to be a scholar of the Holocaust,” Roth said. While studying philosophy at college in California, a friend of Roth’s recommended a book by Elie Wiesel, a Nobel Peace Prize winner who’s written extensively on the Holocaust. The book sparked a drive in Roth to start down a path of philosophical and historical study that has spanned 50 years, continuing today, and cemented Roth’s belief that books can change lives.

Roth is already working on another book, “Advancing Holocaust Studies,” a collaboration with a variety of Holocaust scholars.

“It is important to continue to study genocide, because genocides continue to happen,” Roth noted. “Teaching about the Holocaust is a warning about what can happen.”