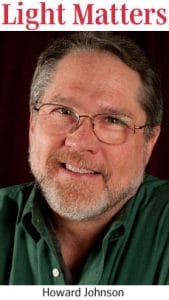 I’ve seen satellite pictures of the night sky showing light coming out of Winthrop, but how does that relate to our view of the stars from the ground? How much are we affected? — Leslie Dolan

I shall answer your question with a song. I’m thinking of the jazz tune by pianist Bill Evans called, “Turn Out the Stars.” He recorded this song in 1966. At that time, the country was in chaos, the environmental movement was gaining ground, and jazz was slowly losing popularity. No one can know what was in the mind of Mr. Evans as he penned this tune, but the closing bars, gradually wending their way ever … more … slowly … toward the inevitable last note, evoke an image of a universe in decline, its stars gently blinking out one by one, leaving in their place nothing but darkness.

My favorite version was recorded live at the Village Vanguard in New York in 1974 with Eddie Gomez and Marty Morell, which can be found on You Tube. If you are near a smartphone or computer, have a listen while you finish reading this article.

Recent measurements taken at Kyrie Jardin’s residence provide a more quantitative answer to Leslie’s question. Under the clear night sky of Aug. 24 at 9:57 p.m., Kyrie carried a small black box into his back yard. He pointed it at the heavens. Pressing a button on one side of the box, he waited a few seconds and then read the following number from its display: 21.54.

The box was a Unihedron Dark Sky Quality meter. It measures light pollution. The number tells us how dark is the sky above Kyrie’s location, a typical residential plot 2.4 miles north of Winthrop. The darker the sky, the more stars you can see. The dark sky quality number indicates, after suitable calculations, how many stars should be visible at that level of darkness

In Kyrie’s back yard, the number of stars visible at the time he made his measurement was: 3,989. Compared to the Pasayten Wilderness, a truly dark location well away from the sky-glow of Winthrop, a place brimming with 5,000 stars, Kyrie has lost more than 1,000 of his stars to local light pollution. Everyone situated within a few miles of Winthrop is similarly affected. People closer to town have suffered even greater losses.

As time passes, things will get worse. Assuming the sky glow from Winthrop and the surrounding area continues growing at its historic rate of seven percent annually, within 20 years Kyrie will lose half of all his stars.

Half the stars gone, permanently erased? The Milky Way lacking its characteristic detail and clarity, looking washed out? What can we do?

As a first step, Winthrop and Twisp could pass dark-sky building codes that would immediately halt the progression of this problem. Okanogan County then has the power to expand those codes to cover the surrounding area.

For a more permanent solution, gaining international recognition as an official Dark Sky Community would put us on a path toward long-term protection of the natural beauty of our night sky, both where we live and where we don’t, like the Pasayten wilderness.

Want to get involved? Write if you’d like to measure the dark sky quality at your location. email: editor@methownews.com.

Howard Johnson, noted author and technologist, lives south of Winthrop. He helped found the Methow Dark Sky Coalition, which seeks to preserve and protect the nighttime environment of the Methow Valley.